Analysis: While there will be inevitable worries that Jacinda Ardern can juggle running the country with a pregnancy, two former PMs say it's just another part of the job, writes Tim Watkin. 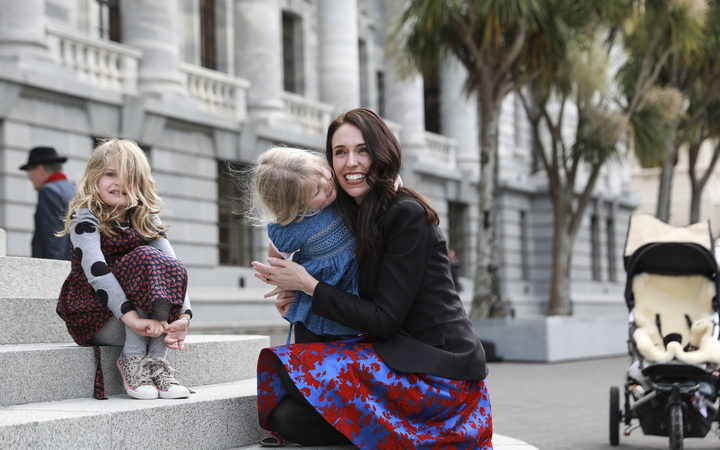 Jacinda Ardern with her nieces outside Parliament on the day she was sworn in as the 40th Prime Minister of New Zealand. Photo: RNZ / Rebekah Parsons-King

What a gift as New Zealand celebrates the quasquicentennial - or 125th anniversary - of universal suffrage. A pregnant prime minister who will give birth during her first term in office; Kate Sheppard & Co could never have imagined such a thing.

As well as being a wonderful "surprise" for the couple from Pt Chevalier, this is a significant political moment for New Zealand. It appears Jacinda Ardern will be only the second women head of government in modern times to have a child while in office. Pakistan's Benazhir Bhutto did so in 1990.

As Dame Jenny Shipley told RNZ this morning, this is "another ground-breaking example of what New Zealand can do".

New Zealand is already rare when it comes to trail-blazing women in leadership. Having been the first country to give women the vote, we were also the first country to have an openly transgender MP, in Georgina Beyer. Ruth Richardson and Katherine Rich both led social change, breast-feeding in Parliament and in the House, respectively.

Unusually, we have had three women prime ministers now, out of the past four. Most countries who have had women leaders quickly tend to suffer from a kind of equality fatigue. They have a single woman leader then go back 'to normal'.

What's more, those women have tended to be spouses or daughters of previous male heads of government and too old to have children.

Our 'rugby, racing and beer' culture has bucked that trend, which perhaps suggests there's more to us as a country than meets the eye.

Sir Geoffrey Palmer told me today that as a colonial nation we have inherited much of the British stiff upper lip and we could do with more warmth in our public life. He hopes the news of Ardern's pregnancy is a chance for a step change.

Dame Jenny's gracious response from the opposite side of the political aisle is a great example of how that may play out.

Within two hours of the announcement, New Zealand's first woman prime minister declared it "brilliant news", warned the "trolls" to "be careful where you go" and asked New Zealanders of all beliefs to "share the joy". Certainly, the politics are all good for Ardern and Labour.

As with a royal birth, people tend to celebrate the joy of new life and that is sure to rub off on a sitting government. And as Dame Jenny points out, Ardern has made a choice for her and her family. If the right can't support an individual's right to choose, then they really do have their politics in a twist.

Indeed, this announcement could also guarantee a leadership change for National. What's the point of Bill English hanging round now? National now have no choice but to think of new generations as well.

Ardern said today many New Zealanders have made the same choice she has, in trying to juggle a family and a career. "I'm not the first woman to multi-task," she memorably said in her stand-up today. And neither is Gayford the first man to take the lead role in childcare. Burton Shipley was a man ahead of his time, when Shipley took on the prime ministership.

Other men in the old days have worked hard to be both good political leaders and good dads. Indeed, politicians can often be caught in the beltway bubble and a child does a lot to counter the risk of seeing the world through political and partisan eyes.

Yet still, there will be questions. New Zealanders will wonder how Ardern can juggle running the country with a pregnancy and then a baby. For many who have suffered difficult pregnancies and the sleepless nights of a child's early years, there will be both concern - and from some - criticism.

The fact is, this is a great opportunity for New Zealanders to learn afresh how New Zealand governments work and to re-think how we treat children. As Sir Geoffrey says, prime ministers do not 'run the country'. We have a cabinet of 20 ministers, chief executives of SOEs and many senior officials making sure the ship of state stays on course.

The prime minister's job, in Sir Geoffrey's words, is largely being the "minister of coordination". He says as long as Ardern gives herself enough space and time off to stay fresh and think clearly, he sees "no great difficulty" in her doing the job and doing it well.

For a politician who has focused much of her portfolio work on children, the political opportunity for both Ardern and New Zealand may just be unique. As Dame Jenny says, a child will give Ardern "new insight" and could create "a very special purpose for her prime ministership".

As the first developed country to have a pregnant head of government, the possibilities are immense.

While no one would want this child to become a political pawn, or even a symbol that somehow turns them into a platform rather than a person, Ardern's pregnancy gives very real heft to Labour's focus on child-friendly policies.

While we have long said 'New Zealand is the best place in the world to raise kids', the truth has long been very different. What if we used this unifying moment to genuinely commit resources and political will to realising that ideal?

Ardern's experiences over her time in office could well see Labour doubling down on the vision and making a significant change in this country's approach to family life.