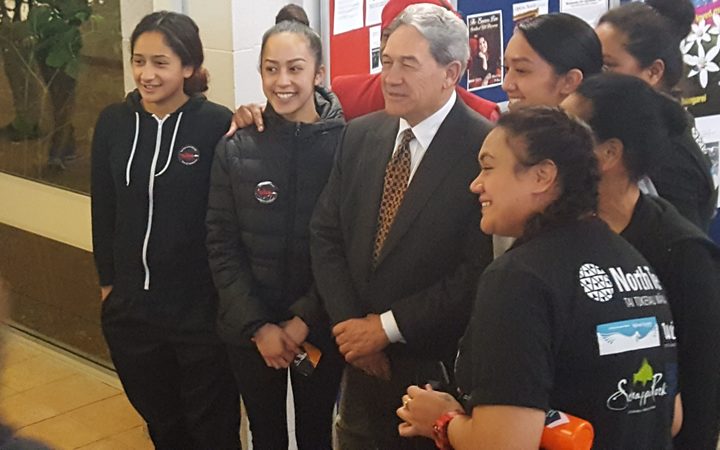 Winston Peters with some of the attendees after the 'Battle for the North' debate in Whangarei Photo: RNZ / Jane Patterson

In the RNZ Poll of Polls, New Zealand First is averaging 8 percent, down from 13 percent at the start of August. That drop has been matched by Labour's strong surge in support over the last five weeks under new leader Jacinda Ardern.

The 'Battle of the North' debate in Whangarei last night brought together candidates contesting the seats of Te Tai Tokerau, Northland and Whangarei.

Speaking after the debate, Mr Peters said he was far from concerned about the latest results.

"My experience has long taught me not to have any regard for these polls which are always, invariably wrong."

But he did admit to sending one of his candidates, Shane Jones, a text warning him not to give any credence to the latest television poll at the debate, and not to swear when talking about it - except he mistakenly sent it to a journalist instead.

"I thought he might get ambushed... he might have said one or two words because they were out to ambush, but I thought I'd give him some warning.

"Unfortunately in the rushing around I think I hit the wrong button."

Mr Jones was also at the debate, in the line-up of Whangarei candidates.

"I'm under instructions not only to lose weight but not to have a potty mouth."

Everyone knew he was a bit "rough around the edges", said Mr Jones. "But I did not offer any profanities either in te reo Māori or in English." 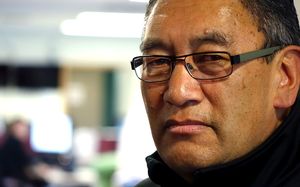 However, there were some strong words from Mana leader Hone Harawira during the debate, when asked about banning overseas buyers from the property market.

He said if the government stopped people from overseas buying the 20,000 houses they were currently purchasing, those houses would then be available for first-time home buyers.

But he said it wasn't just foreign buyers who should be targeted.

"Stop all of those speculators from buying heaps and heaps of homes - New Zealanders and foreigners - and just using it for profit.

"Tax the s*** out of them so they have to put them back onto the market and you'll have another 20,000 homes again, available for first-home buyers."

Putting a tax on water, climate change, dusty roads in Northland and crime were also traversed during the debate.

"It's just the worst 150, it wasn't just a general boot camp or military training, it was for the worst of the worst and they're going to jail anyway."

Labour's Willow Jean Prime said that money should instead be invested much earlier in educating at-risk youth, and equipping them with basic skills and qualifications, including driver licences.

And Mr Peters agreed early intervention was needed, an approach which he said had escaped the government.

"They've discovered all of sudden we've got a gang problem in this country, everybody else knew it for a long, long time," he said.