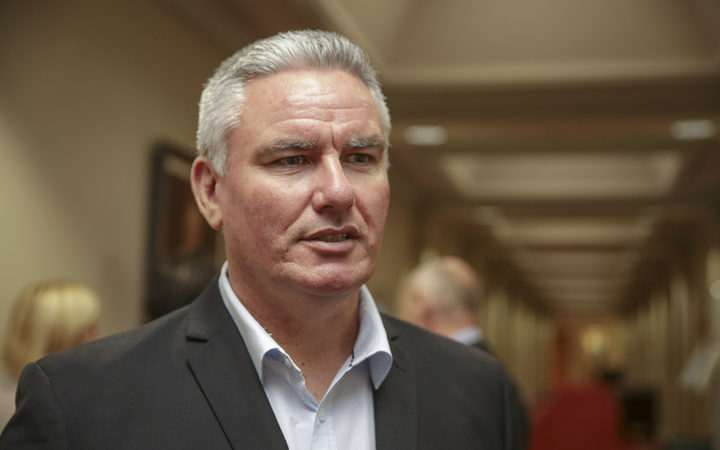 Kelvin Davis is the first Māori to hold a leadership position in the Labour Party. Photo: RNZ / Rebekah Parsons-King

Mr Jackson said it was great to see Kelvin Davis elected as the first Māori deputy leader of the party.

Mr Jackson said Labour's approach to Māori issues is good but, but Mr Davis's election shows an appreciation for Māori from the party.

"We're very very proud of him. Very proud of him. First Māori to go in that position. It's something that I've wanted, and others have wanted, for years and years. We've wanted Māori in those leadership positions, so to see him there, and to see the full caucus support, it brings a lot of joy to Māori out there," he said.

Mr Jackson also paid tribute to Mr Little, saying he is a decent and honest man who worked hard for Labour.

Mr Harawira is standing in the Te Taitokerau electorate against Mr Davis and said today wasn't the time for political point scoring and congratulated his opponent on his selection as Labour's deputy leader.

Mr Harawira said he hasn't really thought about what the implications would be for him.

"There will be challenges that he'll face, and no doubt some may come from me, but today is a special day for Kelvin, Ngāti Manu and for Ngāpuhi and I just wish to extend my best wishes to him on this day," he said.

'Our goal remains the same' - Greens

She said the two parties would continue to have a sound relationship.

"Our goal remains the same - to change the government this September, and we're looking forward to working together to achieve this."

The two parties have signed an agreement to work together until the election.

"Andrew Little has spent the last two-and-a-half years standing up for all New Zealanders, working to bridge the gap between rich and poor, and to call out the National government's many failures," Mrs Turei said.

"Jacinda and Kelvin will know that they have taken on a big job - some will say an insurmountable task."

Mr Peters said Mr Little had "fought the good fight" but was ultimately a victim of the polls.

The Māori Party suggested the new leadership offered a potential reboot in their relationship with Labour.

"We've always said we'd work with both sides - blue or red - but Andrew Little killed off any hope of that happening when he closed the door on us," Māori Party president Tukoroirangi Morgan said.

"We're hoping Jacinda and Kelvin won't be as closed-minded and that they'll agree to work with kaupapa Māori."

He said many Māori had told him they wanted the two parties to work together to form a government after 23 September.

"We need to work together or at least have a proper and meaningful discussion about it."

Little's resignation opens the door for chaos on the left - Seymour

"I disagree with Andrew on many things, but he has more honesty and integrity than others on the Left. These qualities were on display today."

But he said the resignation opened the door for chaos on the left.

"What this means now is even more uncertainty over what a Labour-led government would look like.

"With Labour in chaos, and with an inexperienced leader, Winston Peters and the Greens will be able to extract major concessions after the election."