Labour's new leader Jacinda Ardern says she and her team are preparing to run the 'campaign of our lives' in the lead-up to the September election. 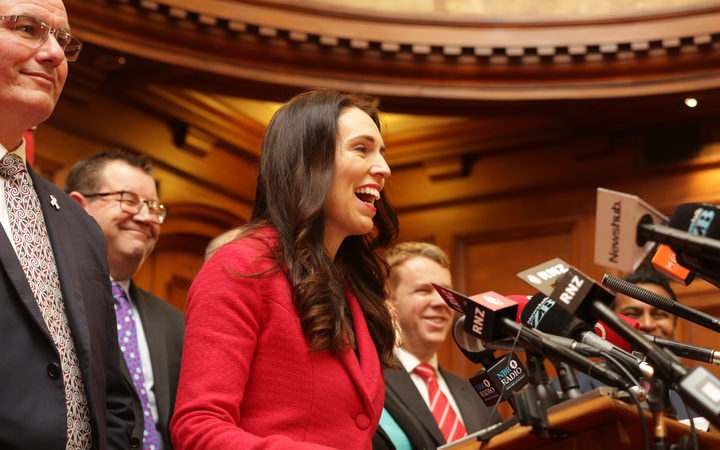 Ms Ardern and her new deputy Kelvin Davis were elected unopposed to take over the party's leadership this morning after former leader Andrew Little announced he would stepping down.

Speaking to media this afternoon she thanked Mr Little and said she had big shoes to fill, but that she was ready for it.

A chance to build a better New Zealand was at stake and the party would be "positive, organised and ready", she said.

"The situation we have found ourselves in is not what anyone expected or wanted," she said.

However, that had not weakened her resolve, or the party's.

While she had previously said she didn't want the top job, Ms Ardern said these were "extraordinary circumstances".

"Granted, I am a young proposition for the party but ... I absolutely believe that I am up to the job."

Ms Ardern said she would take the next three days to take stock of Labour's campaign but that there would be some different ideas that she would be talking to the party about.

She was especially focused on inequality, she said.

She vowed to bring "relentless positivity" to the campaign, and said her and her team were preparing to run the "campaign of our lives".

Ms Ardern heard of Mr Little's decision to step down this morning while she was in a taxi on the way from the airport to caucus, she said.

"I did feel humbled by the fact that Andrew nominated me to be leader today."

There would "absolutely" be a senior place for him in Cabinet if Labour was elected, she said.

"Andrew is a phenomenal member of Parliament. I don't think anyone questions his expertise, certainly not his values. He's worked tirelessly for the Labour Party."

Labour would be working "extremely hard" to retain its Māori seats "and, in fact, take all of them," Ms Ardern said.

In an overture to the Māori Party, though, Kelvin Davis told a reporter in te reo that the door was open to that party.

"They'll have to up their game if they want to work with us but we're open to anything after the election depending who is still standing," he said (translated).

"Kei te tuwhera tonu (It is still open)," he said.