The government is looking for a "cheap way out" of holding a proper inquiry into the historical abuse of children in state care, a lawyer says. 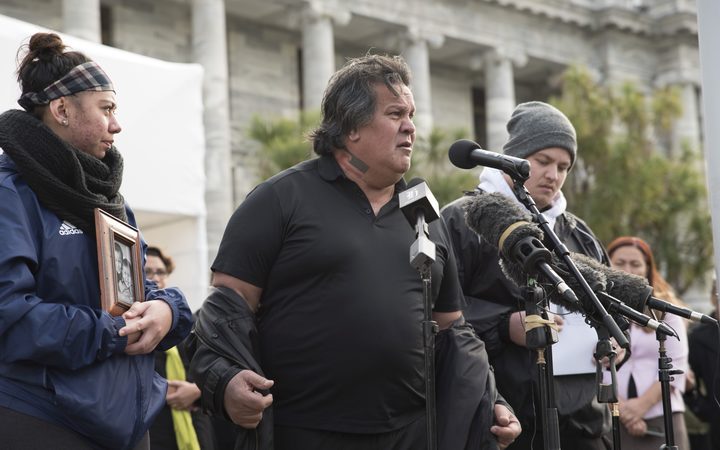 More than 100 former wards of the state and their supporters gathered at Parliament last week to call for a full government inquiry. Photo: RNZ / John Lake

For months, Prime Minister Bill English has rebuffed calls for an investigation and a public apology, but yesterday he softened his position.

Survivors of abuse last week presented a petition and an open letter to Parliament, calling for a public apology and full inquiry.

Mr English yesterday said he wanted to hear more from them and was open to taking further steps to help as long as it did not distract from the process already providing compensation.

A lawyer for some of the survivors, Sonja Cooper, said it looked like Mr English was setting up her clients for a second-rate solution.

"I think what he's wanting is a kind of cheap way out, and that's actually not going to cut it.

"The Human Rights Commission has already said to him twice this year we would like to meet with you, or Anne Tolley, or both - and both requests have been rebuffed."

Ms Cooper said if Mr English was being genuine those meetings would have already taken place.

Even so, her firm would be "very keen" to speak to someone at Cabinet level. "We've certainly got a lot of information that we can share about the extent of the abuse, what victims want, what we know about the systems and our concerns about what it means for children who are in state care now."

'It's not that complicated'

Green Party co-leader Metiria Turei said the victims deserved much more than Mr English "equivocating about what should be done and when".

"It'd be great if the Prime Minister could just make up his mind about what he's going to do.

"All that the victims are asking for is an apology and an inquiry into what happened to them.

"It's not that complicated."

Labour deputy leader Jacinda Ardern said Mr English was wrong to suggest the inquiry could be a distraction.

Mr English yesterday also said it "wouldn't be a problem" for the government to offer a wider apology to the victims - a stark change from its previous resistance.

Mrs Turei said the victims had been asking for that for a very long time.

"If it's not going to be a problem, could they please just do it?"

The government set up a Confidential Listening and Assistance Service (CLAS) in 2008 to hear from victims. It wound up in June 2015.

More than 1000 told CLAS they were physically and sexually abused, and the government has paid out $17 million and apologised to 900 people.