At last, a proper inquiry!

It's really an inquiry into whether there should be an inquiry.

Better than nothing. What's all this "historic abuse in state care" about?

Unimaginably stomach-churning abuse was inflicted upon hundreds, if not thousands of New Zealand children who became state wards, placed in foster homes, institutions and borstals, over several decades. The abuse, in all its physical, sexual and psychological forms, continues to be felt today, this very minute, by its victims and in the wider pattern of crime and violence it incubated and perpetuated.

The words care and historic seem out of place.

Yes. What is more, the Confidential Listening and Assistance Service, which ran from 2008 to 2015 and heard from more than 1100 victims, was not available to those in state care after 1992.

Because that's when state care was considered to have modernised, with institutional facilities largely abandoned.

So there are no cases of abuse in state care after 1992?

There are many. Just this week it was reported that the government has spent close to $700,000 in legal fees to fight a compensation case over abuse that happened in state care in the early 2000s. 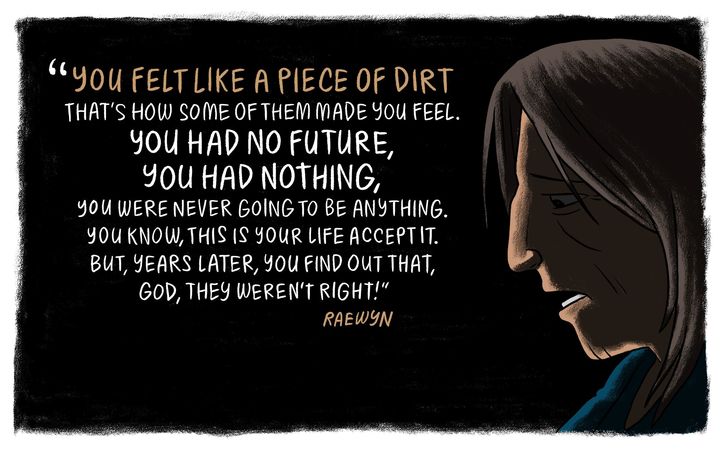 Why were children being placed in state care in the first place?

More than 100,000 children were made state wards. Some were removed from families because of abuse or neglect, some had broken the law, others' parents had died or their families had broken apart.

How widespread was the abuse?

Social Development Minister Anne Tolley has said the number of children who have complained of abuse is about 3.5 percent.

Is it possible that the real figure is higher than that?

What was the abuse?

But presumably the sexual abuse was a minority among complainants.

More than half the people who spoke with the Confidential Listening and Assistance Service said they were sexually abused.

Was the Confidential Listening and Assistance Service not an inquiry?

The service wasn't so much an inquiry as a listening and assistance service, which is hinted at in its name.

What did they hear and how did they assist?

A panel travelled all over New Zealand and to Australia, listening to the accounts of abuse and directing victims to support services and, where applicable, options for recourse and apology.

Its chair, Judge Carolyn Henwood explained: "A picture was painted for us of a careless, neglectful system which allowed cruelty, sexual abuse, bullying and violence to start and continue. Through their words and tears, we could see the invisible welts and bruises, as well as the deeper hurt and emotional damage. They told us that they were not watched over, nor protected. They were not valued, not heard, not believed and not safe. All the people who came forward to speak to us had struggled to make sense of their lives. All wanted a better outcome for the children of the future."

Did Henwood make any recommendations?

Yes. In a report delivered to government, she wrote: "The people told us that that they want systemic change and a public acknowledgement of the wrongs of the past. Thus far they have had neither."

Recommendations included the establishment of an organisation similar to the Independent Police Complaints Authority that would "resolve historic and current complaints to hold the sector to account".

But Henwood didn't call for a commission of inquiry as such?

She has since. As Henwood told RNZ late last year, "we've done half the job ... we've done the listening to 1100 people ... What we don't know is why it went on. We haven't investigated the department itself, we haven't spoken to staff ... So why wouldn't it happen again? ... We do not know the why of it."

Apart from Henwood, who is calling for a public inquiry?

Pretty well all the political parties apart from the biggest one. Victims of abuse have petitioned the government for an inquiry. Among others, so have the Human Rights Commission, the disability commissioner, the Māori Womens' Welfare League, Unicef. And the race relations commissioner, Susan Devoy, who last week emphasised the impact on Māori.

Evidence suggests you are more likely, all other things being equal, to be placed in state care if Māori. This, Devoy wrote, "Is the very definition of institutional racism or systemic discrimination, but without an inquiry into the abuse suffered in our state run institutions we will ever know its true extent."

In a similar vein, Henwood has said, "If we keep sending Māori children into care, they'll suffer. It is a destructive, self-fulfilling prophecy."

Victoria University criminologist Elizabeth Stanley put it like this: "The funnelling of Māori children into welfare institutions was the real start of our systematic mass imprisonment in this country."

So an inquiry, then. Why not?

Questioned on this in parliament this week, Anne Tolley acknowledged that "any kind of abuse in state care is absolutely abhorrent", and noted that the government has so far paid out $17 million on a case-by-case basis, apologising directly to 900 victims. She said an overhaul of services for young people, including the newly renamed 'Ministry for Vulnerable Children' would ensure such abuses were not repeated.

Tolley added: "The question I ask is what would we gain from an inquiry that revictimises the victims for whom we are trying to get some compensation and some settlement. It is appalling that we would put those people through that again."

The Toby and Toby inquiry into the need for an inquiry has been unable to locate any examples of victims opposing an inquiry because it might revictimise them.

What about a general, public apology from the state?

There is no reason for that, because - Tolley again - "There's no evidence that it was a systemic problem".

And how might you find out if there is evidence it was a systemic problem?

Is it possible that the government might be concerned about the legal and financial hazard of a full-blown public inquiry?

So an inquiry is totally off the cards?

Not necessarily. Speaking to The Hui on Sunday, Prime Minister Bill English left the door open, acknowledging that it's "certainly possible" to do so and "there can be a debate about that".

And, after all, he did this week reverse his predecessor's stance on superannuation.

A public inquiry into state care abuse to begin in 2040 then?

The testimonies in the images above are drawn from Elizabeth Stanley's book The Road to Hell: State Violence against Children in Postwar New Zealandand RNZ reports.

Some are pseudonyms. The faces depicted were entirely the invention of face-inventing maverick Toby Morris.