Power Play - Bill English is wrapping up his first trip to Asia as Prime Minister - but was it a success? 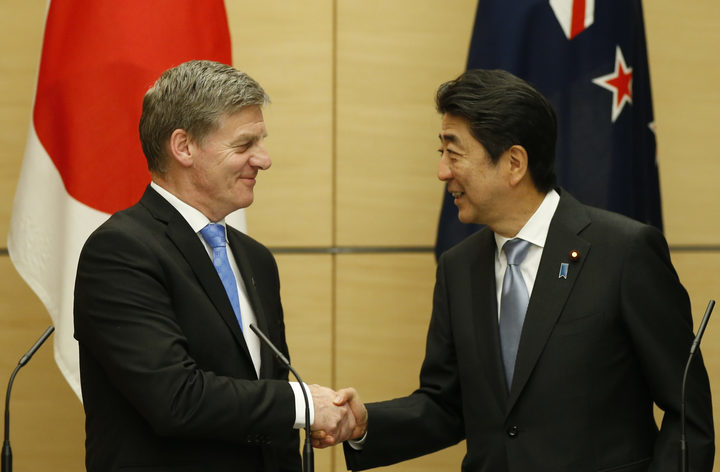 The commitment of Japanese Prime Minister Shinzo Abe to the Trans-Pacific Partnership clearly came as a surprise to both Mr English and his Trade Minister Todd McClay.

With any agreements, commitments or understandings, it is generally the work of officials and ministers in the lead-up to a leaders' meeting where the hard graft is done, then the leaders get to have the glory and what journalists refer to as: The Grip and Grin.

In terms of Shinzo Abe's sudden decision to get back on the TPP-train Mr English credits Mr McClay's work getting around the region talking up the agreement and trying hard to convince the other remaining 10 nations that it's worth sticking with.

It may be Mr McClay's hard work that helped convince the Japanese, but it is also true that Japan is increasingly nervous about its rogue neighbour, North Korea.

The TPP is both a trade deal and a strategic deal and with Japan having it written into its constitution that it can't use war as a means to settle international disputes, it needs strong allies - hence its obvious preference at having a deal which involves the United States.

Mr Abe wants the TPP text to remain as it is, which means the United States will get the benefits of the agreement even if it isn't signed up.

But it also means it is easy enough for the United States to rejoin the grouping should it wish to in the future.

Either way the change of heart by the Japanese looked good for Mr English after his first major meeting in Asia as Prime Minister.

Mr English has a different style to his predecessor John Key on the international stage.

In less formal meetings, like business lunches and meet and greets, Mr Key always had at least one or two (often self-deprecating) jokes that he would tell and he often spoke off the cuff and sometimes at length, but he had a good sense of his audience and when they had had enough.

In the formal meetings and press conferences Mr Key never put a foot wrong, but was sometimes criticised for not annunciating properly or slurring his words.

His easy nature meant people warmed to him and he struck up strong friendships with other foreign leaders, illustrated by the text he got from Malcolm Turnbull when Mr Key announced he was stepping down - "say it ain't so bro".

Mr English comes to the job after years as the Finance Minister and has a naturally prudent approach to his new role.

He is more considered and quietly spoken than Mr Key, and as he says himself, he will have to reform those relationships his own way.

He says it is different for him from when he travelled Asia as Finance Minister, with less focus on details and more on understanding other leaders' perspective and world view, but he also says the context is always different for different Prime Ministers.

The current context is one of increasing global instability and inward looking politics.

Mr English is firm that New Zealand's position as open and economically successful makes it increasingly visible, and that is the message he will use to define himself on the world stage, in his own way.