An upgraded free trade deal between China and New Zealand was on the menu at a gala lunch in honour of Chinese Premier Li Keqiang today. 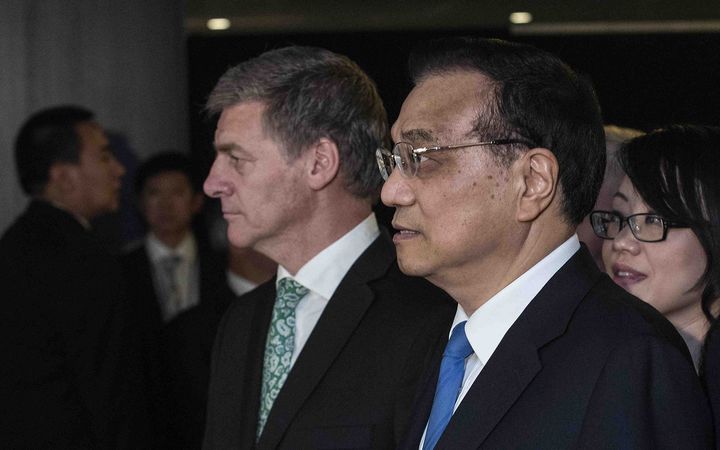 Mr Li told Prime Minister Bill English and about 600 other guests at the Auckland lunch that New Zealand and China's relationship would scale new heights under the upgraded free trade deal that the two countries would start negotiating next month.

He also emphasised the shared interests of China and the United States, a relationship that has been under much scrutiny since Donald Trump was elected president.

After a visit to Chinese-owned Fisher & Paykel headquarters in east Auckland and meetings with the China New Zealand Business Council, Mr Li was welcomed at the business lunch with a haka and a dragon dance.

Speaking through a translator, Mr Li referred to Sir Edmund Hillary's conquest of Everest as an analogy for the relationship between New Zealand and China.

"And that represents that [the] China-New Zealand friendship and co-operation will also be able to scale up the highest peaks. That is because we have the teams from New Zealand, while the Himalayan mountain sits in China, but we see no end of our co-operation - and we can always move up to the higher peaks and climb higher mountains," Mr Li said.

On China's relationship with the United States, the subject of much discussion since Mr Trump took over the presidency, Mr Li expressed confidence in the two countries' shared interests.

Despite twists and turns, he said relations between China and the United States kept moving forward.

The lunch was specially crafted to highlight what Mr English called "the deep and genuine partnerships" between the two countries.

Mr English told guests that New Zealand owed much to the success of the Chinese economy.

"And we particularly appreciated it back in 2009/10 when in the face of the global financial crisis New Zealand was in a deep recession but because of the engine room of the Chinese economy, its effect on Australia and on us, we were able to pull through that difficult period and now we have building on that resilience the confidence of one of the fastest growing developed economies," Mr English said.

He presented Mr Li with an All Blacks shirt with his name and the number 10 on the back.

Earlier he had asked Mr Li to give rugby its own word in Chinese, "so that no one gets it mixed up with Australian rules, a game that we admire, but don't play".

He said he was not against China owning infrastructure here like roads or rail links.

"Provided there's a process, competitive and commercial for all the right reasons, then we wouldn't object to their ownership as opposed to anyone else's," he said.