More Chinese investment in New Zealand and booming tourism numbers were a key part of talks yesterday between the Prime Minister and Chinese Premier Li Keqiang. 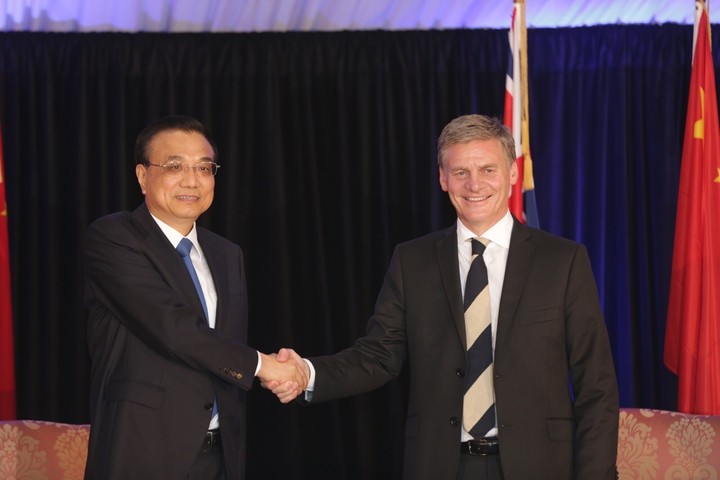 The pair met in Wellington, where they agreed to start work on upgrading the New Zealand-China free trade deal.

The prime minister said he hoped his support of the initiative would underpin the opportunity for New Zealand firms to take part.

He said Chinese investment here was a good thing, but those companies would have to compete on the same terms as local companies.

New Zealand has been looking to upgrade its free trade agreement with China for some time, saying the nature and quantity of goods sent to China had changed markedly since it was signed in 2008.

Talks to upgrade it will begin on 25 April.

Trade Minister Todd McClay said getting rid of non-tariff barriers was a priority.

"How we can get standards lined up a bit more so Kiwis can get their goods and services across the border into China a bit more easily."

Premier Li Keqiang spoke of the importance of strengthening free trade amid global uncertainty and a move towards greater protectionism from the likes of the United States.

"This will give a strong boost to trade links between China and New Zealand and it will send a positive signal to the world and to the region that our two countries are committed to free trade."

Mr English said they didn't directly discuss Donald Trump's presidency in America, but touched on the economic dynamics between China and the US.

"We expressed New Zealand's interest in that being a functional positive relationship because if it isn't then it has significant political and economic impact."

"The premier is an economic expert and he fully understands the nature of the connection between the US and China and I think very clearly understands what's at stake," Mr English said.

Today, Mr Li is in Auckland and will be visiting Fisher and Paykel's factory, meeting with business leaders and attending a gala lunch. He leaves the country on Wednesday.