The government is "kicking the can down the road" on taxing water, and bottling companies should be paying a levy to regional councils, Labour leader Andrew Little says.

The government yesterday asked its water allocation technical advisory group to investigate water exports and issues of charging and ownership.

Opposition parties say a similar government group had already looked at the matter and come up empty - and it would not be any different this time.

Mr Little told Morning Report the government was deliberately delaying a decision until after the election, as it had with multinational company tax and superannuation.

"It's just another example of the government kicking the can down the road."

Water bottling companies should pay some sort of levy which should go to regional councils, he said.

"Most people would say it is fair that if you're coming here, taking this water, untreated, untouched, putting it in a bottle, charging a premium and sending it overseas then fairness dictates that you should contribute something back."

Regional councils should be given the power to charge an appropriate, reasonable rental on that water use. Labour was not proposing a blanket rate, Mr Little said. Treasury and other experts would be involved in deciding on a reasonable charge and there may be different rates for different water quality.

"In the end, you want to have a contribution for the resource use that means the end user is competitive and commercially viable."

Mr Little said the issue had already been looked at by the government's Land and Water Forum, and something needed to be done now. 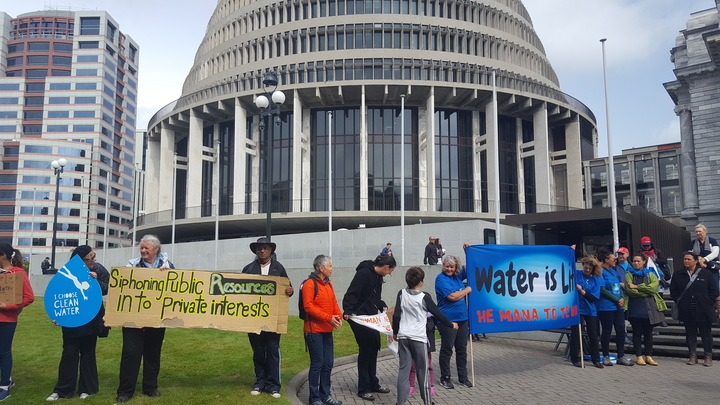 The Land and Water Forum discussed the question of taxing water in 2012, but no resolution was reached and no recommendations made.

In a report it said "some members strenuously opposed any concept of charging or taxing for the use of fresh water", while others maintained "there were valid reasons for charging because of the community benefits, and for efficiency reasons."

Green Party MP Catherine Delahunty said the forum did not reach a consensus, and nothing would change with the advisory group investigation.

"I'm all for consultation etcetera, but if it's not working then it is time for leadership and I think the reason the prime minister has passed the buck is that it doesn't want to deal with the Treaty of Waitangi issues around what happens to water and who owns it," she said.

"Time moves on. Issues that can't be resolved five years ago doesn't necessarily mean that with fresh insight and the parties moving on, new personnel at the table, we can't make further progress," he said.

Mr English said it was a complicated matter because water in itself was free.

He said the specialist advisory group was well suited to look into the issue and no moves would be made to charge companies for water before the election.

The prime minister said Maori rights and interests would be part of the discussion.

The group is due to report at the end of the year or early next year.

Labour Party water spokesperson David Parker said the advisory group would make no difference and the plan was "another flip flop from the Prime Minister".