Bill English will appoint Steven Joyce as Finance Minister if he wins the National Party leadership, he says. 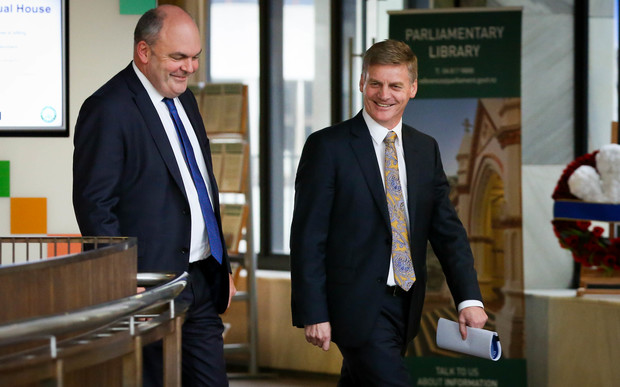 Steven Joyce, left, and Bill English arriving at the lock-up for the Budget in May 2015. Photo: RNZ / Alexander Robertson

Mr English made the revelation during a Treasury lock-up for the latest update on the government books.

Support has been growing for Mr English, with Judith Collins, one of two other contenders, pulling out of the race this afternoon.

Government ministers Paula Bennett and Simon Bridges both want the role of Mr English's deputy, but he has declined to state any preference.

However he was willing to name his potential finance minister as Mr Joyce, a senior Cabinet minister who currently holds portfolios including economic development and tertiary education.

Mr Joyce said he would be happy to take on finance.

"I've been Associate Finance [Minister] now working alongside Bill for the last eight years - it's been a long and enjoyable apprenticeship, we got on very well together and very much looking forward to having that opportunity if it comes to pass."

Mr Joyce said even though many of the current Cabinet ministers would retain senior roles under Mr English, he said they had been listening to the concerns of the backbenchers, as expressed over the past few days.

"I just think we've had a very good discussion about all that in the last few days and actually, as you've probably seen from a number of caucus colleagues, on the one hand they want continuity but they also want some freshness and some openness to new thinking.

"Well, no-one wants to throw the baby out with the bathwater.

"There's been a lot of talk about change and rejuvenation, I'm a strong supporter of refresh and rejuvenation and the reality is two years ago people voted for John Key and the senior team around him, and what we're going to have is a Bill English-led government and one of the best operators from the former regime.

"But also we've got to make sure we provide stable leadership for the country and Steven Joyce is a big part of that."

Mr Joyce said he would like to stay on as National's campaign chair, but in the end that would be up to the party.

When asked if he could rule out an early election to avoid a by-election, prompted by the departure of Labour's Mt Albert MP David Shearer, Mr English said he was not in a position to make that call.