John Key answered his final questions in Parliament this afternoon as Prime Minister. 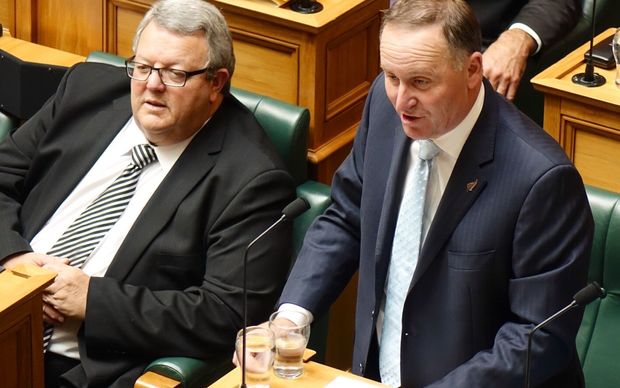 Mr Key announced on Monday he would resign, sparking a leadership contest in the National Party to replace him.

Today at Question Time, New Zealand First leader Winston Peters tried numerous times to get Mr Key to say which of the three leadership contenders he had the most confidence in.

Unable to make any headway, he asked Mr Key how could he have confidence in any of them given how unstable the contest was making his caucus look.

"Feuding, backstabbing, fighting, all sorts of secret calls, so much so that it's fallen to New Zealand First to look like the epitome of stability."

Mr Key was quick to respond: "Well, when you have a caucus of one, it's reasonably easy to be stable".

The final question to Mr Key in his role as Prime Minister came from Green Party co-leader James Shaw, who subjected him to a torturous series of dad jokes.

"Is the real reason that New Zealand's productivity is so low is because every working age New Zealander has been bored to death by Bill English?"

Amid groans from his colleagues, Mr Key rose to respond.

"If that's his test, then I should introduce him to his own caucus colleagues, and man, they are not exactly people I want to party with when I leave Parliament."

The leader of the House Gerry Brownlee made sure it was Mr Key who got the last laugh.

"In his long and successful tenure as Prime Minister, over the last eight years in this House, does he recall a day when the Greens have put more effort into their questions?"

Mr Key replied that he hadn't, but it was good to see they were getting the hang of it because they were going to be "asking questions for a very long time".

National Party MPs will meet at Parliament on Monday to vote for a new leader and a new deputy.

Depending how long the voting takes, an announcement could be expected anytime after midday.

Meanwhile, the race for National's leadership has become more complex with two ministers announcing today they will run for the position of Bill English's deputy, should he win the top job.

The race for the National Party leadership has become slightly more complicated with two ministers announcing today they are both running for the position Bill English's deputy should he win the vote on Monday.

Paula Bennett and Simon Bridges are both backing Mr English for the top job and think they have what it takes to be his offsider.

The other contenders for the leadership are Jonathan Coleman and Judith Collins - no one has yet put themselves forward to stand as their deputies.

He told reporters his expectation was that Mr English would win and that was the basis on which he was standing for deputy.

"Bill English offers the strength and stability that we need at this time, but I think is also really clear and what's come through very strongly is that there is also a very strong desire to see that rejuvenation and change and that sense that we're listening eight years in, and I think I offer that and the ability to provide that to my caucus, in spades."

A couple of hours later on her way into Parliament, Paula Bennett, announced she too was keen on that job.

"Look I've got a fantastic relationship with Bill [English], I've worked with him for many years, him and I have been absolutely invested in the social investment approach amongst other things.

"I do see myself working really really well with him and it's up to Bill."