The government will redevelop an Auckland state housing area to create hundreds of new affordable homes.

The minister responsible for Housing New Zealand, Bill English, and Housing Minister Nick Smith announced the redevelopment on the North Shore this morning.

Mr English said the first stage of the plan, which was already under way, would replace 20 state houses with 59 new social housing units.

He said the second stage of the five-year project would begin next year, in which 38 Housing New Zealand homes would make way for 60 units and 140 new homes built for market supply.

The first homes would be completed in June 2017 and the entire redevelopment was expected to be completed by 2021. 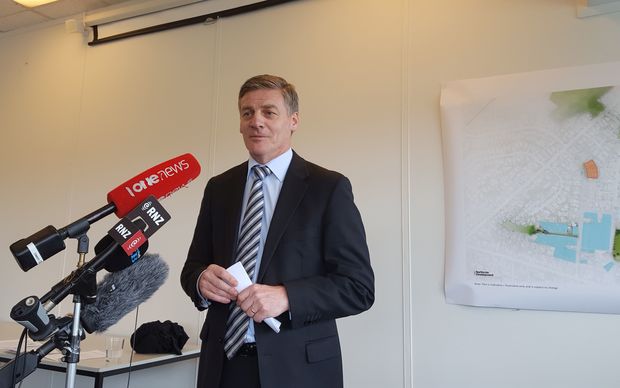 "It complements the range of initiatives we are taking across the city and across many functions of government to improve supply, which is at the heart of improving affordability."

"This significant scale development is consistent with our broader plan for addressing Auckland's housing supply and affordability challenges. It increases overall supply by 600-800 homes.

"It supports the goal of more intensive housing in areas close to public transport and town centres. This development also supports our social objective of moving from areas of all state housing to communities which include a mix of social, affordable and open market housing," Mr Smith said.

Mr Smith said the redevelopment illustrated the importance of the Auckland Unitary Plan, which allowed the government to upscale the number of house it could build on its land.

"The old plans only enabled HNZ to increase its housing stock from about 28,000 to 31,000; the new plan enables approximately 60,000 homes on the equivalent land area Auckland-wide. Today's announcement is the first of a number of large scale HNZ projects which will now be possible under the new rules."

The redevelopment will be carried out by the Hobsonville Land Company, which is owned by a subsidiary of Housing New Zealand.