Some homeless Aucklanders are seeking driveways to rent so they can sleep in their cars. 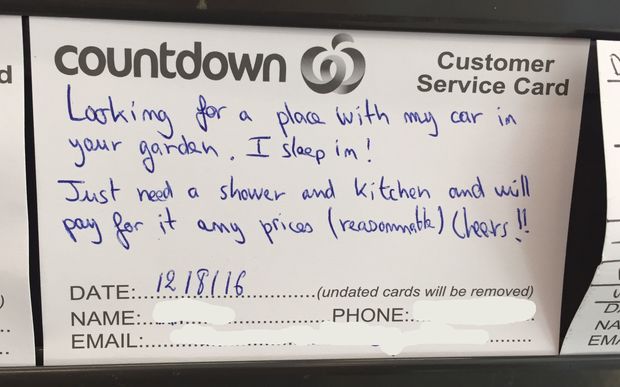 This ad at an Auckland supermarket is one of a number that have been reported. Photo: RNZ / Rowan Quinn

A man has placed an advertisement on a community noticeboard offering to pay rent to park his car on a property and use the shower and the kitchen.

There had been reports of other similar requests.

Commmunity Housing Aotearoa spokesman David Zussman said it was not uncommon for homeless people to sleep in the driveways of friends and families, but it was worrying to hear of people advertising with offers to pay rent.

It was more proof the housing crisis was reaching beyond the poorest in society, Mr Zussman said.

"There's a very focused response and those people may be to get help from the government through MSD.

"But what we're seeing is more and more groups excluded from that, like students or low-income working people. They're the ones that are left on their own."