A solo mother has told an inquiry into homelessness she and her five children ended up sleeping in a car after she left her abusive husband. 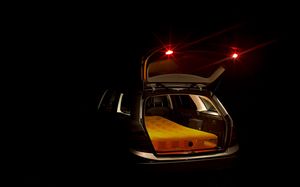 The inquiry has been told that stories of people living in their cars are not isolated incidents. Photo: 123rf.com

Today is the final day of hearings for the cross-party homeless inquiry, which has been held by Labour, the Greens and the Maori Party around the country.

The inquiry aims to collect testimonies, complaints and recommendations on the issue.

Speaking at Parliament this morning, Sarah said government agencies had failed to help her and her children.

She said that after years of trying to get away from her violent husband, both Housing New Zealand and Work and Income turned her away and it had been extremely hard finding safe and affordable housing for her family.

"So we've spent time living in our car, and staying in one room in people's places - all having to share one bed together.

"I was refused to even get on the waitlist for Housing New Zealand until recently."

Sarah told the inquiry she had to go through the courts to fight to protect her children and get a protection order put in place against her husband.

She said it had left her with a legal aid bill to pay and the toll on her and her children's health had been huge.

"Having to live in substandard housing means that my kids have been really sick a lot. We've all had pneumonia and one of my son's almost died from pneumonia.

"We've had to be at the mercy of landlords who would only allow us to stay in their homes, which were way too small, because they knew I was in a vulnerable situation. I had a landlord say I could have their home if I agreed to pay more rent every week, and give them a bigger bond, which they then didn't lodge with the tenancy tribunal," Sarah said.

Unicef executive director Vivien Maidaborn told the inquiry that Sarah's story was not an isolated one and the housing, social support and income systems were broken.

"All of these things, together, are what have created the current crisis."

"Unless we're prepared to think about it as a whole, messy, complex system then we're going to distract ourselves by short-term solutions," Ms Maidaborn said.

Downtown Community Ministry director Stephanie McIntyre told the inquiry that homelessness was one of the most critical social issues confronting the country.

She said the number of affordable, rental houses should be massively increased and the priority should be increasing the number of permanent homes for people, rather than just emergency places.