US Vice President Joe Biden has touched down in Auckland for a 24-hour visit to New Zealand.

Amid tight security, Mr Biden, who is accompanied by his three granddaughters, disembarked from Air Force Two at Auckland Airport just after 6.30pm on Wednesday.

He was immediately whisked away in a motorcade to speak at a community and business leaders' function at the Langham Hotel in downtown Auckland.

It is the first time a US vice president has visited New Zealand since 1970.

Mr Biden was welcomed onto the stage by Foreign Affairs Minister Murray McCully.

"In the last year and during 2016, our shared beliefs and principles have made our two nations close and constructive partners," Mr McCully said.

"New Zealand and the United States are both Pacific nations. Our governments and peoples share a deep and abiding interest in maintaining peace, prosperity and stability in the region.

"Mr Vice President, your visit to these shores is an important contribution to fostering economic, political and personal ties between our two countries. It is our great pleasure to welcome you here tonight."

Pleased to be able to officially welcome US Vice President Joe Biden to New Zealand pic.twitter.com/FB9BETEscR

Mr Biden spoke to the reception of more than 100 people of his country's desire to work more closely with New Zealand and the wider Asia-Pacific region.

"It's a delight to be in New Zealand; the President [Barack Obama] usually doesn't let me come to nice places," he said.

"When the president and I took office, we made a basic determination, and I mean this sincerely, that the Asia-Pacific region is where much of the history of the 21st century will be written."

The US was a Pacific power and it was going nowhere, Mr Biden said.

"We mean what we say when we say we are rebalancing to the Pacific. It is overwhelmingly in our interests that you New Zealand, Australia, Japan, Korea and the northeast Pacific, and everywhere in between, that the countries prosper.

"Whether or not we reach that potential, whether or not we continue to prosper and live in peace, in our view depends on our ability to maintain a free and fair and open and liberal international system on the seas, in the skies, and with free and open commerce." 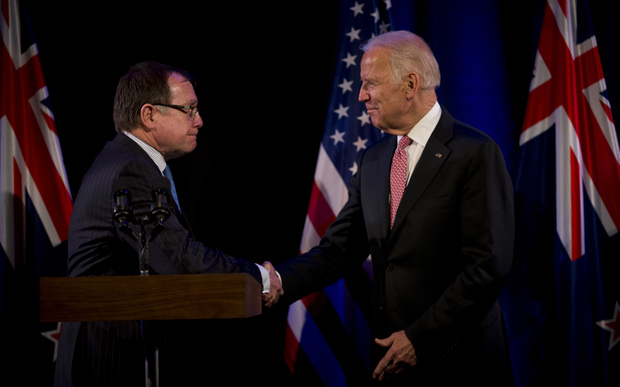 The vice president said New Zealand and the US shared the same values, the same commitment to freedom and equity, and the same fierce independence.

"You nor we never bend. We never bow. We know who we are. We mean what we say. We say it in slightly different ways but it is the same."

He mentioned the work the US and New Zealand did together in the Antarctic, in the Ross Sea and at the United Nations Security Council.