The United States vice president, Joe Biden, has made a brief visit to American Samoa, making him only the second vice-president to do so. 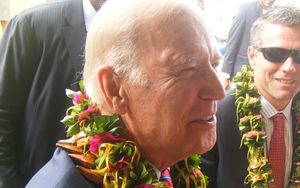 Mr Biden made a 90-minute refuelling stop while en route to Australia and New Zealand, where he met with the territory's governor, Lolo Matalasi Moliga, at the airport.

It is unclear what was discussed in their meeting.

Mr Biden then emerged from the meeting and mingled with more than 100 local residents who had gathered to see him.

Our correspondent says he is the second vice president to visit Pago Pago. The first was Dan Quayle, who was George HW Bush's deputy from 1989-1993.