US Vice President Joe Biden's arrival in New Zealand this evening follows a tradition of visits "strengthening our relationship" marred by differences over US military endeavors. 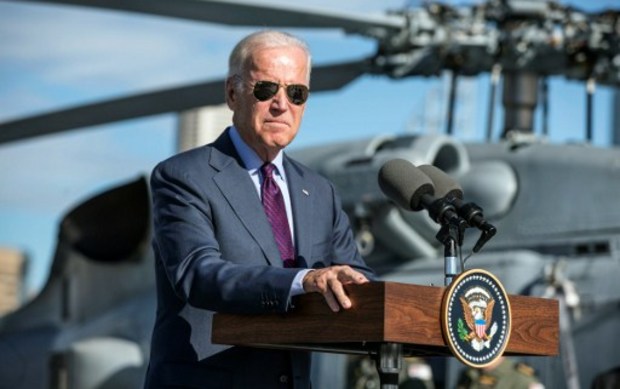 Mr Biden will be in New Zealand for 24 hours after spending three days in Australia. New Zealand Prime Minister John Key said his visit marked a "very deep and broad" relationship between the two countries.

But that relationship has historically been pockmarked by New Zealand's response to the US military, in times of war as well as during peace.

Mr Biden's arrival does make him the most important US official to come to this country since then-President Bill Clinton came for the APEC summit in 1999, which was perhaps a social success but not notably a political one.

During his stay he played a round of golf in Queenstown, as reported by the New Zealand Herald in that year's September 15 edition, and ate several varieties of lamb the day after.

Then-Prime Minister Jenny Shipley said at the time it would help cement advances by New Zealand and provide an opportunity to boost tourism.

"Our relationship is a very strong one, based on our shared values and the many partnerships we are involved in together, particularly on environmental, security and peacekeeping matters. 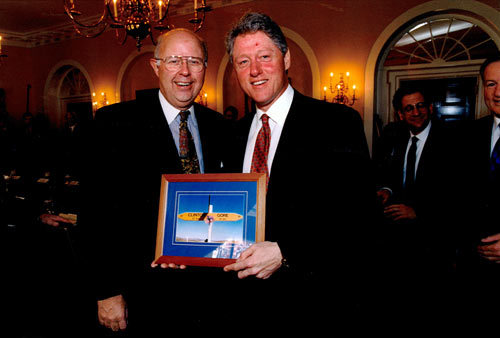 US Ambassador Josiah Beeman presents President Bill Clinton with a roadsign from the Clinton-Gore highway near where he stayed in New Zealand's South Island. Al Gore was his Vice President. Photo: Te Ara Encyclopedia of New Zealand

He also visited the International Antarctic Centre and gave a speech about the environment.

His visit was perhaps less impactful than that of his wife, current presumptive Democratic nominee for the US presidency Hillary.

Her visit as President Barack Obama's Secretary of State in 2010 was primarily to sign the Wellington Declaration, an agreement aimed at setting out the New Zealand-US relationship with special mention of this country's position on nuclear non-proliferation, climate change, activity in the Pacific and joint military exercises.

Ahead of her arrival, former top New Zealand diplomat and international relations specialist Terence O'Brien said visits by a US secretary of state were "as rare as hen's teeth", but would likely not focus on the touchy subject of nuclear ship visits.

Those tensions arose from a 1985 refusal by the New Zealand government to allow a ship, the USS Buchanan, to visit New Zealand because it was capable of carrying nuclear weapons.

The US refused to either confirm or deny whether it was carrying them, and it led to the breakdown of the ANZUS defence agreement which also included Australia.

However, in her visit in 2010 Mrs Clinton said the US wanted to broaden the relationship between the two countries and did not let the issue pass by. 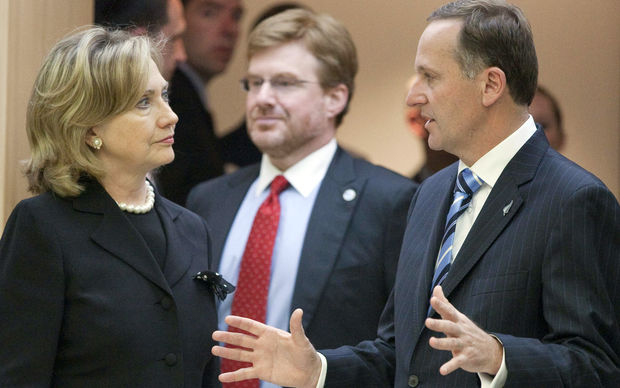 "Both of us are committed to creating a world without nuclear weapons. In fact President Obama has set that as a vision for the United States. Now, I'm aware it may not happen in his lifetime or in yours, but it must remain a goal."

She was also clear about her attitude to the US in future.

"We believe that the United States will remain for the far foreseeable future the largest economy, the largest military, the only country with a true global reach - but we work with and in fact are supportive of other countries that are rising."

Another secretary of state, Condoleezza Rice, came for a day in July 2008 during the Clark government and Bush administration after attending a meeting of the Association of Southeast Asian Nations (ASEAN) in Singapore.

She was welcomed by politicians with song, but by protesters as well over the agressive actions of the US in Iraq.

Prior to either Clinton visit or the breakdown of relations from the dissolution of ANZUS, Vice President Spiro Agnew's visit in 1970 was marred by strong anti-Vietnam War protests.

On a path which included 10 other nations, there were as the visit advanced 700 protesters gathered outside his hotel.

But back before any of that, and indeed helping instigate the fateful US incursion into Vietnam, it was President Lyndon "LBJ" Johnson's visit which was the first US presidential visit to New Zealand. 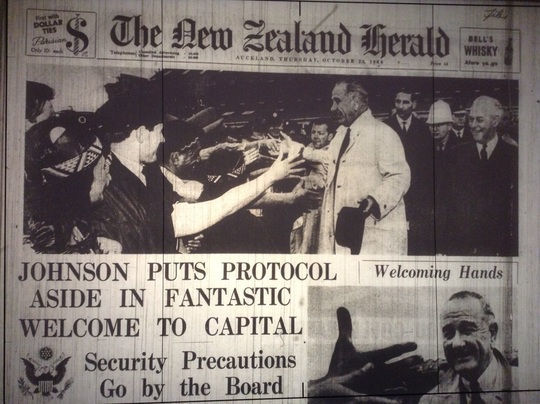 Up to 200,000 Kiwis crammed the streets to get a glimpse of the president and his wife, Lady Bird.

The hundreds of protesters who attended that event were evidently crowded out by cheering supporters.

Newspaper reports at the time were not entirely convinced of the success of the visit, though.

"Prime Minister Holyoake was privately unhappy about this President's visit to increase support for the War as it was timed only months before the general election," wrote the New Zealand Herald. 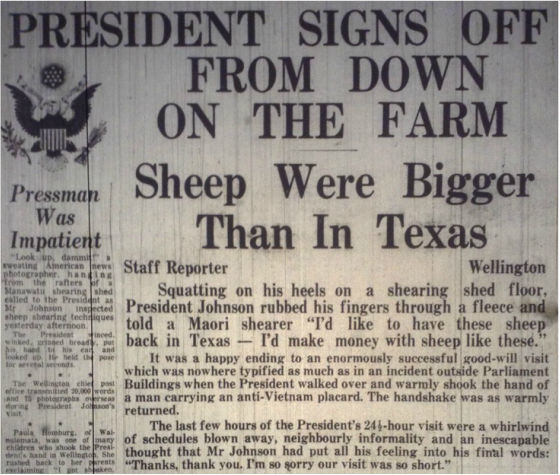 It seems however deep and broad their relationship is, the US and New Zealand have often been somewhat at odds when it comes to conflict.