It's 30 years since homosexual acts between men were decriminalised in New Zealand.

It was signed into law by the governor-general two days later and took effect in August 1986.

Three decades on, the queer community says there's still more to be achieved. 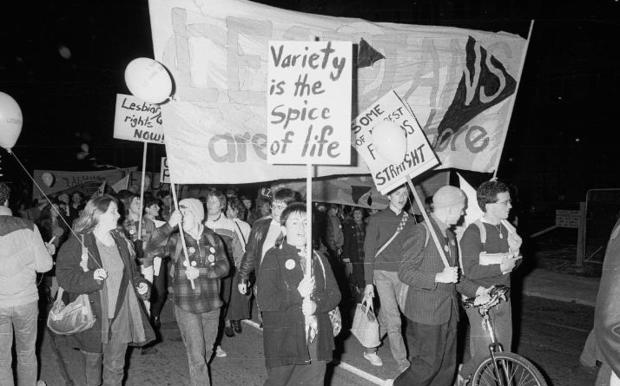 A march in support of homosexual law reform in Wellington on 24 May 1985. Photo: Alexander Turnbull Library / http://natlib.govt.nz/records/22878952

Veteran gay rights activist Bill Logan, who was in Parliament on the day Ms Wilde's bill passed, said the law change was an important vehicle for changing attitudes.

"It's difficult to understand now, because homosexuality is in the public eye all the time, seeming normal, but it had been something that had been invisible largely until that time.

"So suddenly from invisibility it became something that was talked about every day."

Since then other pieces of legislation have made their way through Parliament to support gay rights - including, notably, to legalise same-sex marriage in 2013.

But for younger generations and minority groups, these reforms are just the beginning.

"For some within our community, life is a lot easier than it would have been a generation ago. But for others, not so, and [they] have not had the kind of legislative or legal protections or changes or things like that around them - I'm specifically obviously talking about the trans community within our community."

"Even though you come back to New Zealand and you have a system that's essentially has been put in place over 30 years to protect you and protect your rights, those things haven't penetrated that bubble. We're still living pretty much in a state of oppression."

Queer and transgender Pasifika were still excluded from discussions too often, he said.

"There's space there for us to acknowledge that there's still things going on in our cultural space and our community space that still need to be addressed.

Connor McCleod is a board member at youth gender and sexuality organisation InsideOUT. Support shouldn't just come from government, he said.

"There's all these people throughout our schools who never see their identities validated and it can be quite isolating.

"I'd really like the schools and education [sector] to get involved and in terms of the wider community, supporting initiatives like Rainbow Youth, like InsideOUT, there's a whole range of organisations out there who are working to make Aotearoa safer for all of us."

Setting up rainbow youth groups in schools would promote positive attitudes to gender and sexuality, he said.

"So these groups are in place, where in the school young people can see they have a safe space to go where they can be free to be who they really are, and not experience this homophobic, biphobic or transphobic bullying that's so rampant throughout our schools."

Parliament is now looking at whether those convicted of consensual homosexual acts before the law change should get an official apology.