Former MP Hone Harawira is getting back into politics and will stand for Māori electorate seat Te Tai Tokerau again in next year's election, he says. 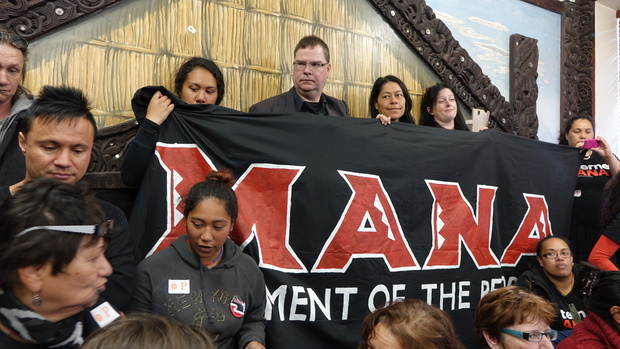 Mr Harawira lost his seat to Labour's Kelvin Davis in 2014. His Mana Party which combined with Kim Dotcom's Internet Party, got just 1.5 percent of the party vote.

He told RNZ's Mihingarangi Forbes on TV3's The Hui he was re-entering the political fray because Māori lacked a strong voice in Parliament.

Mr Harawira said many Māori MPs got caught up in party politics, and forgot who they were meant to be representing.

"You've gotta have somebody in there who's a fighter," he said.

"Kelvin's tried, I think Marama's tried, but they keep getting squeezed back into that party box."

But Mr Davis disputes that Māori still lack a strong voice in Parliament.

"He's being a bit disrespectful to the Māori MPs in Parliament, saying that Māori need a new voice in there.

"The reality is we've got a lot of traction around the issues that matter to people in terms of the elimination of sexual violence, in terms of holding the government to account around what's happening in Corrections."

Mr Davis said the people of Te Tai Tokerau own the seat and anyone is welcome to contest it.

"Voices look and sound different and diversity among Māori in politics has always been valid and accepted I think to Māori voters."

She said the Mana movement led by Mr Harawira has had a good relationship with the Greens in the past and they would be happy to work with him.

Mr Harawira said he was unlikely to work with the Labour Party, which he thought was too centrist.

He said its leader Andrew Little had led the party away from its working-class roots.

"He seems to be a nice enough guy, but he keeps bouncing around from trying to sound tough to trying to sound centrist, and I just think the leader of the Labour Party should have made up his mind by now."

Mr Harawira said his former Mana Movement colleagues, Sue Bradford and John Minto, could be involved in the party, but in less prominent roles than in 2014.