Donald Trump and Hillary Clinton have consolidated their positions as the leading presidential candidates for the Republicans and the Democrats respectively after 'Super Tuesday'. 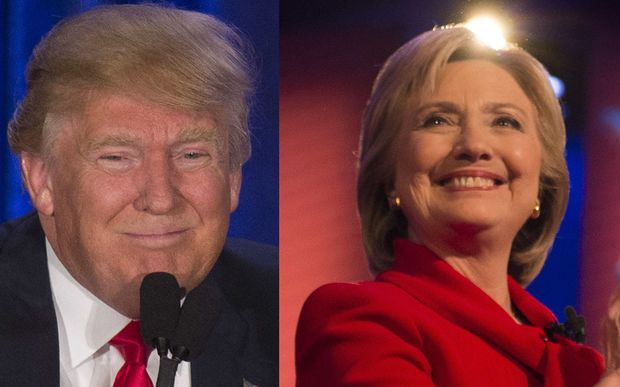 That begs the question, who would better foster the relationship with New Zealand in the myriad of bilateral ties that bind us?

Prime Minister John Key is not in a position to opine freely on his preferred pick; that lesson was learned when his predecessor Helen Clark had to apologise to the then US President George W. Bush in 2003 for suggesting the Iraq war would not have happened if Al Gore had been elected.

Mr Key has to maintain a strictly neutral line on the domestic politics of other countries; particularly with the United States an important global partner, and one where he may end up having to work with either one of the candidates.

Speaking to people beyond the ninth floor of Beehive, there is a general view Hillary Clinton, a former Secretary of State, would be the preferred option, because she is a known quantity.

Mrs Clinton signed the Wellington Declaration in 2010, seen as a significant step in the New Zealand-United States relationship, and a signal from the US of a renewed interest in the Asia Pacific region.

Labour leader Andrew Little says New Zealand will have no choice but to work with whoever is elected by the American people, but he would lean towards Mrs Clinton.

"Hillary Clinton offers a safe, steady pair of hands in the presidency which is why I think she would be attractive to a lot more Americans."

Robert Ayson, professor of strategic studies at Wellington's Victoria University, agrees, and is blunt about the prospect of a Trump presidency.

"Donald Trump's not just an unknown quantity, he's a little bit of an unguided missile."

Professor Ayson says his strong, and often outrageous, comments about what he would do as president are cause for alarm for New Zealand, though he believes much of the rhetoric would be curtailed by the political system and the reality of holding office.

"Who Trump gets around him will be interesting, but they're likely to be hard-liners and people who in a sense, you can shoot first and ask questions later and that's just not going to work for America's position in the world.

"America is not as strong an actor as it once was in relative terms. It has to deal with a rising China, it has to deal with messy conflicts in the Middle East that aren't easily addressed or solved, so Trump is promising stuff he can't deliver on."

"From the American perspective, it's a dangerous thing that he's not taken seriously by the world. The British parliament seriously debated a motion a few weeks ago to ban him from entry."

Mr Dunne also points out that the Democratic Party is a lot more protectionist than New Zealand with its openness to free trade.

Which brings us to the Trans-Pacific Partnership trade deal, of which New Zealand and the United States are both signatories.

The US Congress still has to pass domestic enabling legislation and the intention is to try to get that through before the end of President Barack Obama's term.

Mr Trump has made no bones about his opposition to the TPP and despite being heavily involved in the early drafting and negotiations, Mrs Clinton has also expressed unease with some aspects of the deal.

Mrs Clinton's anti-TPP statements are being viewed as politically driven in the heat of the campaign as she tries to appeal to a broader Democratic base, with the belief she would not actually take any dramatic action if installed as President.

No-one, however, is as willing to predict Mr Trump's intentions.

Zachary Norris is an American lawyer and a partner in an Auckland law firm, Norris Legal Consulting, that specialises in US law.

He said the power over foreign affairs, which includes international treaties, rests with the Executive Branch - that is, the President.

He says that has been interpreted by past presidents as the ability to unilaterally withdraw from treaties without the approval of Congress or the Senate - and there are a number of past precedents.

One is the withdrawal from the Anti-Ballistic Missile Treaty in 2002 under George Bush. And within the TPP itself Article 30.6 gives any party the unilateral right to withdraw by simply providing written notice.

Stephen Jacobi, executive director of the New Zealand International Business Forum, says a US withdrawal would have significant adverse consequences.

He says New Zealand could wave goodbye to the belief America has a special interest in the Asia Pacific region, and the good faith developed through the rule-making process.

"It would take us back to the law of the jungle in international trade, and none of that could be considered good for New Zealand."

Another widely-held view, however, is that there is a major difference between what is said on the campaign trail, and what either candidate would want to do, or be able to do, if elected President.