The respective tax policies of Labour and National were both challenged during the latest televised leaders' debate between John Key and David Cunliffe last night. 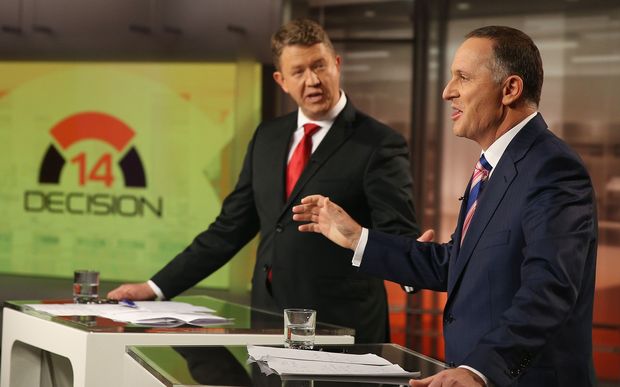 Labour's capital gains tax and National's plans for tax relief in 2017, as well as the two parties different approaches to the minimum wage, dominated the TV3 debate, which was the second to last debate in this election.

Labour leader David Cunliffe defended his party's policy to put the minimum wage up by $2 an hour, saying many New Zealanders were struggling on low wages.

John Key countered that, saying that kind of increase would result in businesses raising prices and laying off staff.

But much of the debate was over the two parties' centrepiece policies - capital gains tax and future tax cuts under National.

In return, Mr Cunliffe attacked National's tax plan and its record on housing.

"There isn't a single home that's yet been completed in the special housing areas he's talking about around Auckland.

"He's talking about reducing the cost of building materials by reducing duty but the actual amount - less than 1 percent - is being absorbed by the average house price growing more than that in two weeks, so that's a nothing."

Devil in the detail

Mr Cunliffe then turned his sights to the level of detail in possible tax cuts National says it may offer in 2017.

"Why didn't we have more detail in our 30-page document? Well I ask New Zealanders to compare this - our capital gains tax plan or Mr Key's flimsy, $5-a-week, half-a-block of cheese, if, maybe, you're lucky."

He went on to question the amount Mr Key said the government would have to spend to give low and middle income families $1500 in tax relief.

During the debate Mr Key said that rather than National's budget of $1 billion, it was closer to $3.5 billion.

Afterwards, Mr Cunliffe told reporters he had got the number wrong and it was closer to $2.5 billion.

Mr Key was also challenged on why National was offering possible tax cuts three years from now, and what form they would actually take.

But he refused to answer questions about whether the changes would be to income tax, or to the likes of Working for Families entitlements.

The third and final leaders' debate will be on Television New Zealand next Wednesday.