Mr Key and Mr Cunliffe battled it out on TV3's debate tonight, hosted by John Campbell. 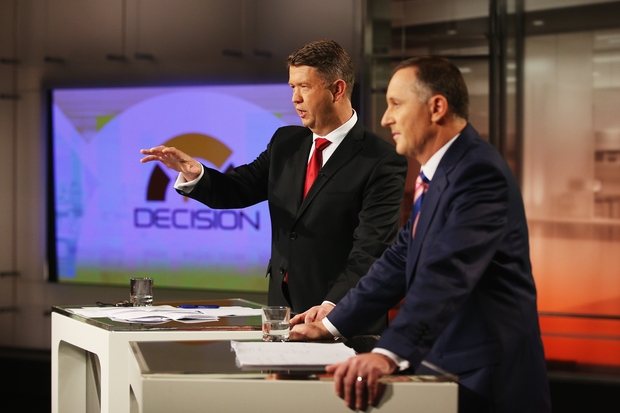 The debate began with questions about jobs and economic development. Mr Cunliffe attacked National's economic vision and its tax cut plan that it released yesterday.

"I say we've got a plan and it's got more substance that a $5 a week tax cut - revealed after months of procrastination."

If re-elected, National intends to commit $1 billion a year to new spending over the next three years, while retaining $500 million a year for tax cuts and debt repayment. John Key said if the cuts went ahead they would be modest - about $10 a week - and would be targeted at low and middle income earners from April 2017.

It was an at times heated exchange, with John Campbell forced to order the MPs to stop talking over each other.

Labour is proposing a 15 percent capital gains tax, excluding on the family home, to help take the heat out of the housing market. This came under fire from Mr Key:

Meanwhile, Mr Cunliffe hit out at National's record on housing:

"There isn't a single home that's yet been completed in special housing areas he's talking about around Auckland. He's talking about knocking down the cost of building materials by reducing duty - but the actual amount, less than 1 percent is being absorbed by the average house price growing more than that in two weeks. So that's a nothing."

John Key said his party's strong polling to date should not be second-guessed, and if people want a National-led Government, they will have to vote that way on 20 September.

Despite poor polling for Labour, David Cunliffe said a swing of only a few percent could mean a change where New Zealand moves away from being a country where only a few do well and far too many are missing out.

The next television debate between the two leaders is on 17 September on TV One, three days before voters to the polls.

Labour's David Cunliffe is the underdog in the election, with his party at 26.1 percent in the 3 News Reid Research poll out tonight and trails well behind National's 46.7 percent.

The Green Party recorded 13 percent support and New Zealand First 5.9 percent. The Conservative Party recorded 4.7 percent, but the other parties were all below 2 percent.

The poll surveyed about 1000 people from 2-8 September and has a margin of error of plus or minus 3.1 percent.

Parties that do not win an electorate seat need to get 5 percent of the party votes to make it into Parliament.