The Prime Minister is sticking to his line that there is nothing untoward about his office's links to right-wing blogger Cameron Slater.

John Key describes the fact that his Justice Minister, Judith Collins, passed on the name of a public servant, who was then the subject of death threats, as just gossip. 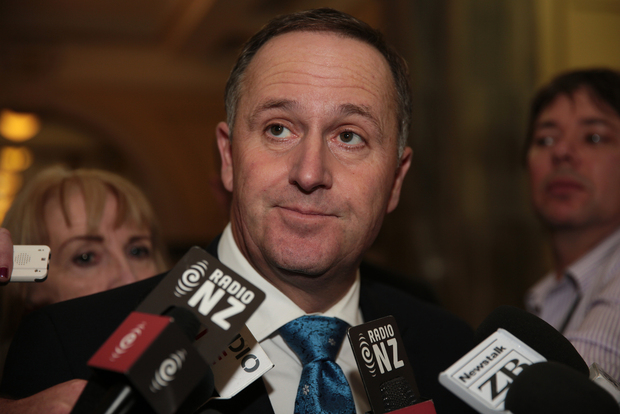 While Mr Key might have hoped the furore around Nicky Hager's book Dirty Politics would have passed by now, emails released yesterday helped confirm a number of the allegations made in the book.

Mr Key, too, has conceded that his staff member at the time, Jason Ede, got access to the Labour Party's private website in 2011, but he does not think it matters.

"I just don't think New Zealanders care about that issue. I think what they care about is the things we are talking about ... No, what I am saying is the person is working down at the National Party now that's one point ... no I accept that, but you are offering one perspective of some stolen emails which are not necessarily right."

Mr Key says Labour had a weakness in its website and anyone would have taken advantage of it.

But Labour leader David Cunliffe disagrees, and says the released emails confirm much of what is in Nicky Hager's book.

Mr Cunliffe is particularly angry about confirmation that Judith Collins gave the name of a public servant to Cameron Slater, who she suspected had leaked information about Finance Minister Bill English double-dipping on his accommodation allowance.

The public servant, Simon Pleasants, had not leaked any information, but was subject to abuse on Mr Slater's Whale Oil blogsite and also received death threats.

Mr Cunliffe says Mr Key should hold Ms Collins to account for her role in the matter.

"He should fire her because she has acted in a way that is unbecoming and unfit for a Minister of Justice or any Minister. The language she's used, leaking smears against Minister Services staff, naming them in public. These breach long-standing conventions of ministerial behaviour and the list is much longer."

John Key, though, does not see anything wrong in what Ms Collins did and yesterday expressed no regret for the threats Mr Pleasants faced as a consequence.

"I asked her this morning specifically and she told me she had passed on the title, that he already knew the name but again she's no shrinking violet. You guys are free to interview her anytime you want," he says.

But Judith Collins has refused to appear on a range of Radio New Zealand programmes to explain her conduct.

Mr Key also continues to reject suggestions that Cameron Slater got any help in receiving information from the Security Intelligence Service about a briefing its then director gave the then Labour Party leader, Phil Goff, in 2011.

The Prime Minister has consistently said he knew nothing about the release of information to the SIS and it never came across his desk.

It might not have come across his desk, but the SIS has confirmed its long-standing practice is to refer any Official Information Act requests to the Prime Minister's office. A spokesperson for the SIS says it happened in this case, but neither Mr Key nor his office made any comment about the release of the information.

Meanwhile, John Key continues to argue that National's connection to Mr Slater is no different to the Labour Party's links to left-wing bloggers.

When it is suggested no other blogger publishes such vicious and vindictive material as Whale Oil, Mr Key's response is that Mr Slater is a shock jock.

But, as he struggles to shrug off questions emerging from the book Dirty Politics, Mr Key might be regretting allowing himself and his office to get too close to the shock jock.