Let's be clear. Investigative writer Nicky Hager's book Dirty Politics is not a book simply of interest in the beltway. It is not a book only relevant to political insiders.

Nor does it tell political insiders, including journalists, what they already knew. If it did why had they not already reported it?

The book has prompted the Prime Minister to dismiss it as full of unsubstantiated claims. But John Key has not even read it so how would he know?

The politics is such, though, that Mr Key is keen to denigrate it as quickly as possible. That started even before the book was published when Mr Key described Nicky Hager as a screaming, left-wing conspiracy theorist.

It is a tried and true political strategy. Undermine the credibility of your critic and you do not need to address the criticism they make.

In this case Mr Key is not engaging on what is in Mr Hager's book. His response is simply to say Mr Hager is wrong and that anything in the book is incorrect.

He conveniently overlooks a wad of email and Facebook exchanges between blogger Cameron Slater and a host of other people, which are included in the book.

The most significant exchanges, from Mr Key's perspective, are between Mr Slater and Jason Ede, who works in Mr Key's office. Until August 2011 Mr Ede was employed by Ministerial Services but since then has presumably been paid by Parliamentary Service or by the National Party itself. 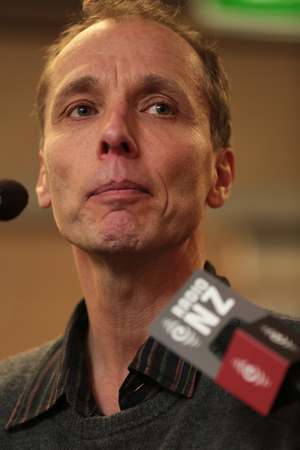 What the emails reveal though is that Mr Ede and Mr Slater worked closely in getting access to the Labour Party's websites, which included lists of the party's donors and supporters.

There are a range of emails between the two men about getting access to the website through an insecure location, with Mr Ede saying he wished to "offer a hearty sigh of relief and celebrate dynamic IP addresses".

Mr Hager says that meant Mr Ede's computer regularly changed its IP address, making it difficult for him to be tracked and identified.

Mr Key says no National Party staff were involved in the matter and shrugged his shoulders at advice Mr Ede had gained access to Labour's website. As well, he says Mr Ede is not employed by Ministerial Services.

But at the time Mr Ede was a Ministerial Services employee, which means he was employed in the Prime Minister's office. That raises more questions about his conduct.

The book also raises further questions about how Cameron Slater so quickly got a copy of a briefing given to the then Labour leader Phil Goff early in 2011 from the Security Intelligence Service. It says Mr Key or his office must have been involved.

But Mr Key denies he intervened at all to have the report released, which caused Mr Goff some political embarrassment at the time.

The conduct of the Justice Minister, Judith Collins, who is a close friend of Cameron Slater, comes under further scrutiny.

The book suggests Cameron Slater asked Ms Collins to intervene on getting a prisoner moved to a different prison, while she was the Corrections Minister. Here Mr Key has conceded he might have to take a closer look but, for the moment, he accepts Ms Collins' word that she has done nothing untoward.

While the book is not conclusive it includes enough evidence to suggest National has orchestrated a campaign of political vilification using bloggers, Cameron Slater in particular, to do the dirty work.

As the blogosphere has expanded, using blogs to make political attacks has become a more accepted and used tactic. Under-resourced mainstream media then pick up the stories because they are already in the public domain.

It allows political parties to have a bigger impact with a political "scandal" than if they had attempted to have the story run in the mainstream media from the very start. Some bloggers - and certainly Cameron Slater is one - have no compunction using material even if its veracity is questionable.

And the governing party, in this case National, is in a stronger position to source information that can sustain the sort of attack politics some blogs engage in.

Some people might view this as politics as usual. They will also argue - correctly - that all parties engage in attack politics to some degree or other.

But Cameron Slater - and the extent to which he is prepared to go - takes attack politics to a whole new plane.

While National could keep its distance it was happy to tolerate Mr Slater's vindictiveness. Now that relationship is coming under strain.

Watch National distance itself from Mr Slater as it tries to minimise the damage Mr Hager's revelations might do. While the book is not likely to be some kind of circuit breaker those on the centre-left might be looking for, it certainly adds spice to the next five weeks of the election campaign.