Opinion - Driving home one day, my head suddenly felt like it was on fire - as if melting from the inside out. I felt faint and my vision started to blur. Luckily I could pull over safely and wasn't far from home. 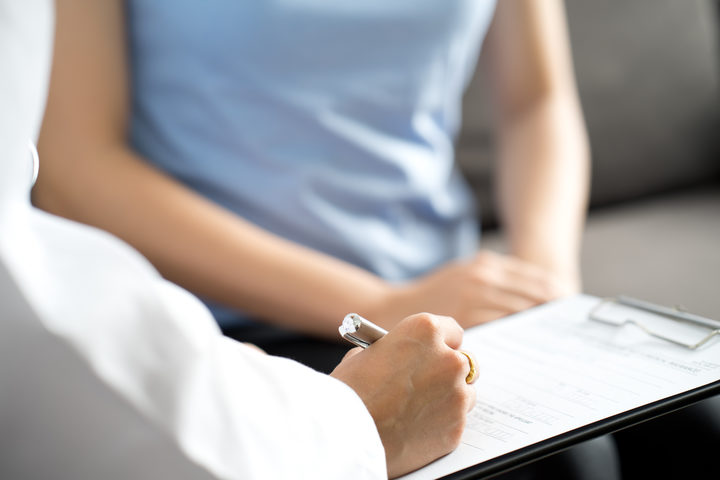 At 46, I was otherwise fit, happy and healthy. Nothing in my life had changed.

A locum GP asked if I was going through perimenopause. 'What-kind-of menopause?' I said in my head.

If the GP's question had been part of a comprehension test, I would certainly have failed. I knew that at some point my periods would come to an end. But surely not until I was much older, like 50-something.

Over the following weeks and months, my symptoms piled up: inexplicable anxiety, panic attacks, insomnia, a low/depressed mood, nausea, faintness, achy hip joints, itchy/crawly skin and a metallic taste in my mouth. I was randomly tearful, lost my appetite and felt relentlessly tired.

It was as if a switch had been flicked.

One night, I ended up at A&E with abdominal pain and nausea; another time at home with a paramedic during a panic attack. I thought I was having a heart attack.

It was a worrying, confusing and sometimes lonely experience.

I was referred to a cardiologist, and when I asked if perimenopause could affect my heart they said, 'No'. The next week my GP told me that she regularly sees women my age with heart complaints like palpitations. It seemed hard for me or anyone to join the dots.

One morning after too many nights without sleep, I felt too unwell to make my GP appointment. We spoke on the phone instead. "I can't go on like this," I said, through the tears.

I took sleeping pills for a few nights. It broke the back of my insomnia.

My GP concluded that my symptoms seemed hormonal. She recommended progesterone but it had no effect. After another appointment, I went home with a prescription for anti-depressants.

Whether anyone knows about perimenopause or menopause, or not, seems hit and miss.

I grew up seeing posters on GP noticeboards about everything from chicken pox or asthma and issues affecting men. I grew up knowing more about the potential signs of prostate cancer and solutions for impotency than I did about menopause.

I have never seen a poster or flyer about perimenopause or menopause even though more than 350,000 Kiwi women are aged 45-55 (the average age of a woman's last period is 51).

I was overwhelmed by the amount of information about menopause online. At my local library, there were only four books on the subject.

I started by talking to friends of a similar age. As it turned out, they didn't know much either.

I made a point of talking to older women. Some couldn't remember their experiences of menopause. Some sailed through without any symptoms. My partner's post-menopausal aunt told me that 'you will learn things you never knew you needed to know'.

I have learned that there is a range of 30+ potential symptoms - some of which can be minor, others significantly life-changing.

I have learned that the unpredictable process of my ovaries winding back their production of oestrogen can take one to 10 years; that menopause isn't officially over until a woman hasn't had a period for at least one year and that symptoms can continue after that time.

I was lucky to receive meaningful messages from friends much older than me. 'What if I feel like this forever?' I asked. 'You won't,' one said. 'How do you know?' I asked. 'Because there will be a solution. There's always a solution.'

I took her advice - backed my GP - to go to the Wellington Menopause Clinic.

"I don't feel like myself," I told the specialist. "I feel like I've been hit by a bus."

I burst into tears with relief. During the 40-minute appointment, the specialist explained that my symptoms were a sign that my oestrogen levels had hit rock bottom, and that oestrogen has over 400 biological actions. The anti-depressants I had started were replaced with oestrogen patches and progesterone capsules to balance my fluctuating hormones.

Within a couple of days of starting the patches, my stomach stopped swirling and my appetite returned. Over the following weeks and months, my mood lifted and one by one my other symptoms faded away. I started sleeping through the night again.

Eighteen months later, I know the importance of pacing myself. I still need to wind down in the evenings and go to bed soon after my children. But I feel like myself again.

According to the Australasian Menopause Society, 20 percent of women suffer severe symptoms, 60 percent have moderate symptoms and 20 percent get away with none.

Knowing about the potential symptoms of perimenopause and different ways of managing them would have saved me and my family a lot of unnecessary concern.

Inspired by the concepts of Death Over Dinner and Jefferson Dinners, I invited eight friends from 40-something to 70-something to a pot-luck dinner and called it Menopause Over Martinis. Whether someone had symptoms or not, everyone had questions or something to say. The martinis were obviously optional.

As one guest commented afterwards: "Everyone should be aware of the wild rollercoaster that women's hormones can take them on. There's no need for it to be taboo or restricted to just women talking about it."

Other friends started asking when I was hosting the next dinner. That was never my intention but I've hosted three so far and launched a website to help others host their own.

I'm feeling increasingly buoyed by the momentum gathering around the world as more campaigners make some noise about menopause.

In 2019, UK campaigners were successful in having menopause added to the sex education curriculum in secondary schools.

Recently, Michelle Obama shared her thoughts about perimenopause with the world. "What a woman's body is taking her through is important information. It's an important thing to take up space in a society, because half of us are going through this but we're living like it's not happening."

And Caitlin Moran: '…our [women's] third acts tend to see the formation of entirely new lives. We get into hillwalking. We found charities. We start meditating. We garden. We get PhDs. We learn to tango. We start our own businesses. We get involved in campaigning.'

My third act seems well underway. I live on a hill. I walk every day and have started a campaign for change.

Since that day when I almost fainted driving home, I have held on to my partner's aunt's other wise words:

"Menopause can be tough but when you come out the other side you will feel like a new and better version of yourself. You'll have a new sense of freedom."

I can't tell you how much I am looking forward to that, and to more women feeling more informed and better supported along the way.

*Sarah Connor is a Wellington writer, mother and campaigner. Read more about Menopause Over Martinis here.