Opinion - If you've ever struggled with your weight, it's highly likely that you've beaten yourself up about being a weak person with far more force and condemnation than Judith Collins used yesterday in her comments about obesity and personal responsibility. 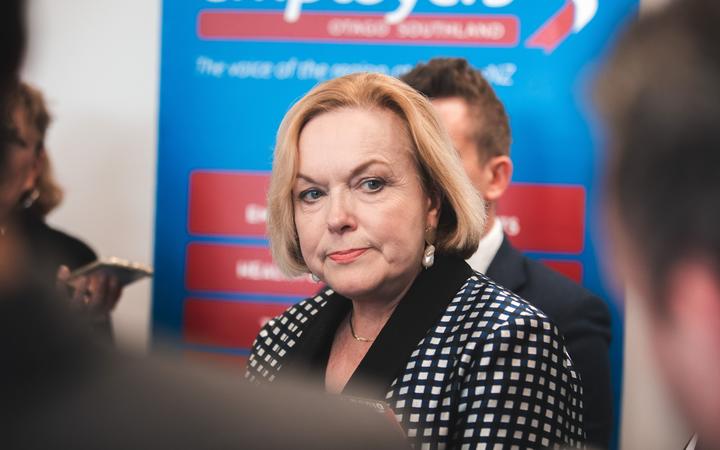 As this never-ending election campaign draws to a close absolutely nobody was talking about obesity. Like housing and climate change, it's at crisis levels, but actually doing anything about it would involve confronting systemic problems and taking on multi-billion-dollar industries. Unless you're Collins that is, who decided to confront it by making it entirely your problem and yours alone.

Using her trademark 'I'll tell you what' preface, the one that often portents a 'keeping it real, levelling with you, possibly pseudo-scientific' truth, Collins revealed her thoughts on obesity, invoking the doctrine of personal responsibility. As someone who's written about her own struggles with weight and body image, I love nothing more than hearing this simplistic catch cry. I could have avoided twenty years of guilt, shame and self-hatred if only I'd known that the solution was buying a chicken, some frozen vege and a bag of personal responsibility. Losing weight on this amazing Collins-endorsed diet would've been a mere bonus.

Collins has since been eaten alive by subject matter experts faster than the packet of chocolate biscuits she's not bringing to the negotiating table. It is widely accepted by health professionals, the World Health Organisation, academics and policymakers that the solution for tackling the obesity epidemic does not lie in asking people to repeatedly draw on their willpower by eating less and exercising more.

Obesity is now regarded as the result of a confluence of biological and environmental factors. Bariatric surgeon Andrew Jenkinson explains the latest biological science in this interview with Jesse Mulligan. Leading subject matter expert, University of Auckland professor of population nutrition and global health, Boyd Swinburn, succinctly outlined the environment factors in this 2011 paper for The Lancet. The simplistic 'calories in, calories out' personal responsibility mantra is usually only found on the Instagram profiles of hardcore fitness influencers these days.

One of her own MP's, Mark Mitchell, has 'broken ranks' to try and bring the conversation back within the realms of accepted wisdom. 'Broken ranks' is actually a bit hyperbolic given the party's own health policy on obesity which says they'll update their 2015 Child Obesity Plan to include everyone. Tracking that back to the policy's launch, former Health Minister Jonathan Coleman is on record as saying "There is no single solution that will fix obesity."

Unless the plan is to get people scratching out the line 'I will not eat the cheeseburger' again and again while Bootcamp Sergeant Collins hovers over their shoulder yelling 'YOU'RE WEAK', Mark Mitchell is simply on message. It is Collins who is off. National Party health spokesperson Dr Shane Reti, who has been articulate and reasoned throughout the pandemic, and is, by all accounts, well-qualified and well-respected, must be dreading a question about Collins' views.

Collins' comments could easily have been about any subject where you can invoke the idea that personal, rather than state or collective responsibility, is the solution. It's designed to appeal to those who are sick of the nanny state. Those who've had a gutsful of expert advice during the pandemic. Those who are out protesting about their loss of personal freedom. It's possibly a strategy but it looks more like a desperate flail, and by invoking the idea that people are 'blaming the system', Collins simply leaves room for more questions about which system she is referring to.

Is it the one that gives the multi-billion dollar food industry freedom to stack the supermarket shelves with food products no one needs? Pineapple Lump flavoured L&P and Mountain Dew flavoured Doritos do not exist to give consumers choice. These ridiculous product developments exist purely to increase sales. The personal responsibility narrative helpfully panders to the food industry lobby. They can continue to pump out low nutrition food nobody asked for and wash their hands of the consequences.

Perhaps it's the system that sees us working longer hours, in sedentary jobs, stuck in our cars or on public transport, as we travel across cities clogged with traffic to get to these jobs? Maybe it's the system that has people trapped in a cycle of poverty, with poor education and employment opportunities, living in inadequate housing surrounded by fast-food outlets?

It could be the system that has beaten up on fat people for years. This system is built on the myth of the efficacy of personal responsibility. It's deployed by the weight-loss, fashion, beauty, wellbeing and fitness industries who all profit off the fact that 90 percent of people who lose weight through diet and exercise alone, regain it. This system uses the language of restriction and willpower and yet plenty of research points to there being no correlation between the costly diets and weight-loss schemes that promote these as a means to losing weight and long-term health and weight management.

One of the saddest things about Collins' comments is that it has sparked unhelpful commentary online about her own weight. This is what happens when we're not generous and generative in our discussions about our bodies and when we don't take collective responsibility for the way we discuss them. This is what happens when we continue to situate our views about weight within old and debunked ideas - we return to old habits and unhelpful language. This is what happens when you insist on dragging the personal responsibility dogma out as a solution to a problem that's not only complicated, but one where people have already suffered for too long by keeping it all locked inside.

Anyone who has ever tried to lose weight or accept themselves as they are is incredibly familiar with the mind prison of personal responsibility. We isolate ourselves within it, we wear the shame, stigma and prejudice created by the idea that's all our own fault and our bodies are somehow 'wrong', we fail in our attempts to lose weight or accept ourselves the way we are and we hate ourselves all over again.

Even if there is some tiny pay-off in winning back the voters that might connect with this language Collins has used, it remains a mystery as to why she'd want to insert herself into this negative, isolating and unproductive cycle of guilt and shame. They seem like odd emotions to want to invoke in people the week before Election Day and ones we're perfectly capable of conjuring up all on our own.

*Anna Rawhiti-Connell is a consultant and writer working in digital marketing and communications.