Baking a "pav" and turning up to a backyard barbecue with the dessert in hand is about as Australian as it gets. On Christmas Day, soon after the last prawn has been peeled, the white meringue cake topped with cream and fruit takes pride of place on tables across the country. It's a dish synonymous with summer celebrations; a refreshing sweet treat on an often hot and sticky day. With many of us being brought up to believe it to be a local invention, it's no wonder Australians feel such a strong affinity with pavlova.

The only problem is, New Zealanders feel the same way. 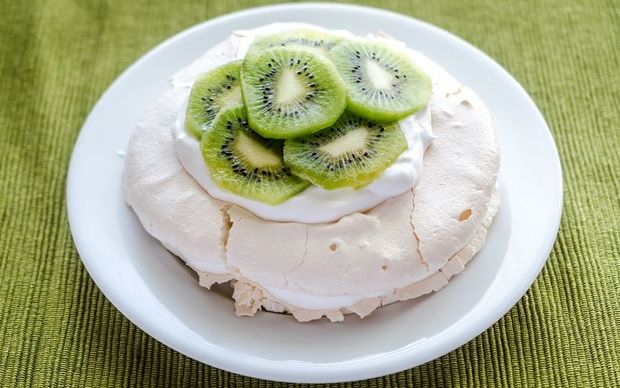 New Zealanders tend to opt for kiwifruit on their pavs, where as Australians are more likely to go for a passionfruit topping. Photo: 123RF

"When I was growing up in the 1970s, I remember my mum would make a pavlova and take it to friends' houses and parties," said Australian chef Peter Gilmore, who is known for his meringue-based Snow Egg dessert, which found fame in the 2010 series of MasterChef Australia. "I think of the Australian variety having tropical fruit, like passionfruit and mangoes. So, when I put my Sydney Opera House-shaped version on the menu at [Sydney Opera House restaurant] Bennelong, passionfruit was the obvious choice for me to feature."

Like many in the industry, Gilmore had long believed the pavlova to be an Australian creation, only recently discovering New Zealand also makes the same claim. The dessert was named after the Russian ballerina Anna Pavlova, who was a megastar when she toured both countries in the 1920s.

On the Australia side, chef Herbert "Bert" Sachse is said to have created the pavlova at Perth's Esplanade Hotel in 1935, and it was named by the house manager, Harry Nairn, who remarked it was "as light as pavlova". In an interview with Woman's Day in 1973, Sachse said the proprietress, Elsie Ploughman, and Nairn recruited him to make something "different and unique" as a cake or sweet. "I had always regretted that the meringue cake was invariably too hard and crusty, so I set out to create something that would have a crunchy top and would cut like a marshmallow," he said. "After a month of experimentation - and many failures - I hit upon the recipe, which survives today."

New Zealanders often cite the story of an unnamed chef at a Wellington hotel, who is said to have invented the pavlova during the ballerina's only tour of the country in 1926. But emeritus professor Helen Leach, a New Zealander who specialises in food anthropology at the University of Otago and authored The Pavlova Story: A Slice of New Zealand's Culinary History, was unable to verify this version of events.

However, Dr Leach found references to three types of dessert called pavlova in her homeland prior to Sachse's offering. The first was the brand Davis Gelatine's multicoloured, layered jelly in 1926. Next came small coffee and walnut-flavoured meringues, similar to kisses, which appeared in the city of Dunedin in 1928 and became popular throughout the country. Then in 1929, a recipe for a large meringue cake named after the ballerina appeared in the regional publication Dairy Farmer's Annual. "This third type of pavlova was the one that several decades later became the subject of the pavlova 'wars', which insist that the pavlova was 'created' or 'invented' and then stolen/falsely claimed by chefs/cooks across the Tasman," Dr Leach said.

US-based food scholar Darra Goldstein became fascinated with pavlova after her daughter moved to Australia in 2014, and later New Zealand, and she began collecting cookbooks from both countries. She included a chapter about it, written by Dr Leach, in the book she edited, The Oxford Companion to Sugar and Sweets.

"The author said that the precise origins of pavlova can't be determined, and that, in fact, it's misguided to believe that recipes are invented - rather, recipes evolve over time, often in more than one location," Goldstein said. "When there's a dish as popular as pavlova, it's no surprise that both Australia and New Zealand would want to claim it as something they have given the world. Friendly rivalries are always fun, and for some it's a matter of national pride."

That's certainly the case for New Zealander Dr Andrew Paul Wood and Australian Annabelle Utrecht, who met debating pavlova's origins on a mutual friend's Facebook post. Both went away determined to prove the other wrong. But after they started digging deeper, they were surprised to find that the history of the pavlova goes back a lot further.

The pair have spent the past seven years piecing together what Utrecht describes as a "culinary jigsaw puzzle", trawling through cookbooks, newspapers, still life paintings and archives from around the world. Originally, they planned to make a short documentary, but when they realised the pavlova story was much bigger than just a trans-Tasman battle, they decided to write a book, which has the working title Beat Until Stiff: The Secret History of the Pavlova and a Social History of Meringue Desserts.

"To start with, we undertook a forensic examination of both the Kiwi and Australian legends, and new facts [were] quickly revealed that flip the narrative completely," Utrecht said. "By the 18th Century, large meringue constructions incorporating cream and fruit elements could be found in aristocratic kitchens across German-speaking lands, so the thing we call a pavlova today is actually more than two centuries old."

Soon, she said, women in middle-class European kitchens began creating meringue cakes topped with whipped cream, nuts and fruit or fruit preserves. Utrecht said Europe was in turmoil with the Napoleonic wars in the 1800s and when people moved and settled in other lands, the pavlova-like desserts went with them. "By 1860 you can find it in Great Britain, Russia and North America," she said. "I have made a couple of cakes from 1850 that I have served to guests and asked what it was, and they say pavlova. But I tell them it's not, it's a schaum torte, which means 'foam cake' in German." Utrecht said recipes for schaum torte arrived in South Australia in the lead-up to World War II, when there was a large influx of German immigrants.

But Utrecht said Sachse produced a "sophisticated and highly stable" pavlova. "I have baked his pavlova a couple of times and guests love his cake because it's the closest thing to the pavlova in their minds," she said. "When I baked the 1929 New Zealand pavlova I was really surprised; it's actually a meringue sandwich, not the pavlova we have today. But the next pavlovas that came out of New Zealand by around 1932 to 1933 were single-level cakes topped with fruit and cream."

As for the name, the pair also discovered hundreds of recipes for sweet and savoury dishes named after Anna Pavlova in the northern hemisphere. They include Strawberries Pavlova, an Edwardian-period glacé served with a garnish of raspberries, which appeared in the New Zealand Herald in 1911 but Utrecht believes it was reprinted from England. "If you go back even earlier in 1911, there was a pavlova dessert in the United States that included a meringue component that could only be obtained under Pavlova's name for a limited time," she said.

Dr Wood said he was particularly surprised to come across a frog's legs pavlova in New York. "Annabelle is really the maestro in the kitchen and she tested just about every recipe that we have dug up, but we have not trialled that one," he said.

Dr Wood was even more astonished to find a recipe in medieval Arabic books, including the 13th-Century Syrian cookbook Kitab al-Wusla ilà al-Habib fi Wasf al-Tayyibat wa al-Tib (Book of the Bond of Friendship in the Description of Good Dishes and Perfumes) that, while not a meringue, "if you squinted at it in the right way" is similar to an Italian meringue, which is made by pouring a sugar syrup over the top of egg whites rather than the baked kind that we're familiar with.

"We think this sort of cooking with meringues and sugar syrup probably passed into Europe via Portuguese-controlled territories in Africa (formerly Arab-held), or through the Moorish occupation of Spain, Sicily and France," he said. "The earliest European references turn up in places like Italy and Spain, where there was a large Muslim population in the medieval ages. Sugar was incredibly expensive, so these treats were confections destined for the wealthiest of tables, like that of the Imperial Habsburgs, who also happened to be rich in New World sugar. Baked meringues (petite arrangements) can be found in the Spanish Habsburg's Imperial Madrid kitchen by the late 16th and early 17th Century. By the 18th Century, larger and more sophisticated meringue productions begin to reveal themselves in cookbooks, and by the end of the 1700s, very large and sophisticated meringue cakes can be found in the homes of Habsburg nobles, like that of an Austrian meringue cake, three meringue layers high, filled with fruit preserves. Going into the 1800s, meringue cakes became incredibly popular among the wealthy middle classes too."

But he believes the Australasian-style pavlova, perfected by Sachse, was honed by housewives in America's Midwest by the late 19th Century. "That's where they started adding things like cornflour," he said. "Our pavlova usually has a starch ingredient that makes it stiffer and stronger. But the fruit is the big thing; that's probably the biggest difference between Australian and New Zealand pavlova. The New Zealand pavlova is very much a kiwi fruit thing, whereas in Australia you have passionfruit and occasional atrocities I've seen, like pineapple. In Britain, it's very much about strawberries, while in older versions chopped walnut was a big thing."

Ultimately, Dr Wood said the pair see the "great, great granddaddy" of the large meringue cake, as we would understand the pavlova, as being the Spanische Windtorte (souffle cake), which was an Austrian dessert consisting of a meringue shell or layers, filled with whipped cream and fruit. "It was the first of its kind, and known to be baked in Habsburg kitchens during the late 1700s," he said.

"Identical in nature, baiser torte and schaum torte recipes only began to surface during the 1800s when geopolitical factors motivated nomenclature changes in non-Habsburg kingdoms. A large section of our book is dedicated to examining European geopolitics and why the Windtorte was renamed so often."

Dr Wood said it's been fascinating following the social history of pavlova, and the family tree of meringues, looking at how meringue cakes possibly started on the African continent and evolved in the Habsburg and Roman Empires in Central Europe. "As power shifted between empires and kingdoms, the meringue went with it," he said.

But he admits eating, breathing and sleeping pavlova for the past few years has taken its toll. "We had no idea it was going to be this involved when we started it," he said. "I'm not interested in making them or eating them anymore. For years my family has asked me to make a big pavlova for Christmas, but now it's the last thing I want to do."