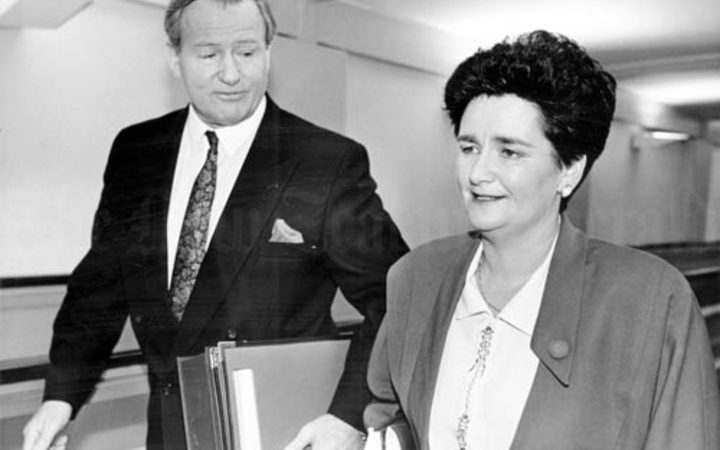 Prime Minister Jim Bolger and Finance Minister Ruth Richardson make their way to the House of Representatives for the presentation of the 1991 budget. Photo: Te Ara / Public Domain

What I am reasonably certain of, however, is that it never strongly occurred to former prime minister Jim Bolger, whose last-minute endorsement of Muller was widely seen as helping carry him over the line.

No doubt, as he put it, Bolger always valued his protégé's "totally relevant" operating skills, which he saw first-hand when he gave Muller his first parliamentary job as an executive assistant back in 1994.

But if regarding him - or for that matter Judith Collins - as an heir apparent had ever really been on the former three-time premier's mind, I should have been one of the first outsiders he might have mentioned it to. Much of my past year has been given over to chatting on Friday mornings with The Great Helmsman about life, love and, as it happens, political leadership.

Bolger, who recently turned 85, has been out of national politics for a couple of decades now, but hardly out of things to say. This was something that impressed me when I met with him at his Waikanae home a few years ago while researching an unrelated diplomatic project. Thus began our long conversational project that sees published light of day next month.

The art and craft of political leadership pops up dozens of times in the work, which starts out by explaining Bolger's historical success in light of what the historian Michael Bassett identifies as leadership's seven essential attributes: high ambitions, rude good health, intelligence, good education, the ability to come across well in the media, a supportive home environment, a cheerful temperament, the capacity to make tough decisions and, perhaps most importantly, the ability to give a sense of a better world. Plus a bit of good (Irish) luck.

So how does one pull it off? "Partly it's intuition," Bolger mused at one point. "And how does one get that? I honestly don't know. Maybe you're born with it. I don't know where it comes from, but I do know you need to have it for successful leadership."

Of course, the book isn't just about leadership, but also his parents travelling to the South Seas from Ireland at the height of the (now suddenly relevant) Great Depression. There's an interlude having to do with the Catholic Church and another about his experience of quitting school at age 15 to work the family farm in Taranaki. Even here, though, it wasn't difficult to see a leadership theme in, for instance, his ability as a teenager to individually recognise the faces of each of the animals back on the farm.

He also talked about different styles of female leadership, too, starting with Joan, his wife of the past 57 talkative years, but also his flinty finance minister Ruth Richardson along with his party's onetime maverick feminist Marilyn Waring.

Also in focus: Jenny Shipley, the woman who ousted him as leader in 1997 - and promptly went on to handsomely lose the next election - along with the his old parliamentary nemesis, Helen Clark, who these days he speaks of with obvious professional affection and personal respect.

Interestingly, if not tellingly, the names of Todd Muller and Judith Collins never came up during any of the original conversations. But why would they? The ultimate test of political leadership, after all, is a proven ability to win.

*David Cohen is a Wellington journalist and the author of Fridays with Jim: Conversations About Our Country with Jim Bolger (Massey University Press, August 2020).