First Person - The paved path heading to the Linwood mosque no longer resembles the one we treaded on last year when people from around the world gathered to pay respects.

Our feet sink into the gravel rocks, marking new footprints leading to the entrance. But the print that was left last year, after seven people died there, will forever lay in the minds of those who congregate at the mosque.

I am greeted with warm smiles from men, respectfully putting their hands over their heart - a sign of sincerity - as they acknowledge our religious connection; peace be upon you, they say.

Some are donning their traditional long garments, some with tattoos peeping from just under their collars or sleeves, and some with full-grown beards.

Those at mosque say the number of converts has increased since the attacks, and that more were encouraged after seeing a family of five accept Islam in their lives. 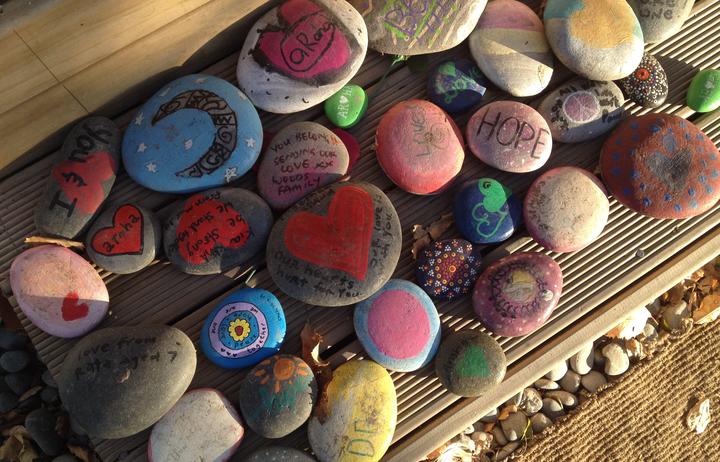 Rocks left outside the footsteps of Linwood Mosque with messages of strength and solidarity. Photo: RNZ / Isra'a Emhail

A simple flower bouquet adorns the exterior with a message framed in a heart. Rocks lie below it, etched with drawings and messages of strength. The tributes just before the one-year mark are mild in scale when compared to last year's, when they flowed out onto the gates and even a nearby street.

Walking into the mosque for the first time last year, I could not help but sense something heavy, thinking we were entering a sacred place where people had just been killed. This year, the lush new traditional prayer carpets, reframed doorway, and levelled ground leave you in awe at the transformation, and in anticipation to explore every nook despite its modest size. 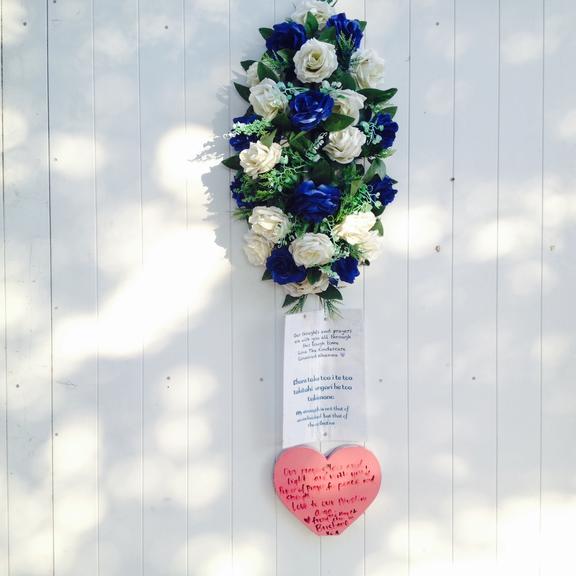 Those entering for the first time say they feel a sense of peace. Usually it's their first experience going inside a mosque, so they're taken aback by the absence of any statues or loud sermons or religious chants.

One Muslim Australian woman says it was she, along with her husband, that helped renovate the mosque. The couple were so amazed by the solidarity they had seen in New Zealand since last year, in comparison to Australia, that even her husband was considering moving over. 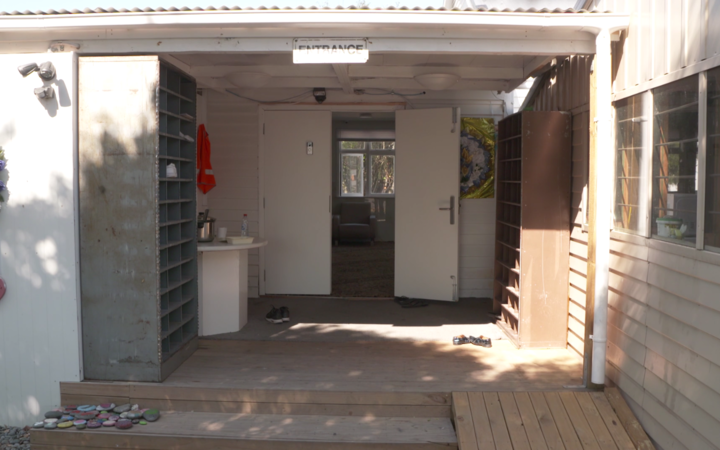 Just before entering, we meet Abdul Aziz, the man who has become known for chasing out the gunman during the attack on the mosque. He's taking care of all the media and coordinating what's happening with the help of other regulars there.

It's sad that this has become the occasion we all flock to the mosque for, when there's more to the history of this mosque and its people than this one dark chapter that it will forever bear.

Once the peace settles several hours later and the media finally take their leave, Abdul Aziz just about has a chance to rest and breathe: but there's just me now, anxiously waiting outside for the Imam and afraid of making my existence known in case of burdening this man any further. 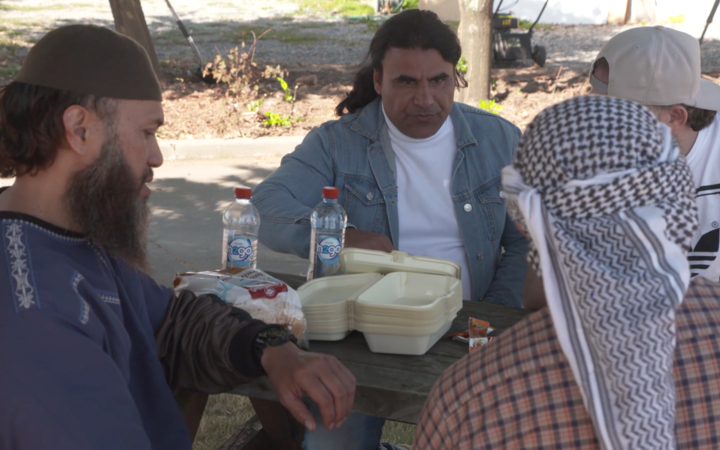 Talking about the incident over and over again would have made him weary, but I notice the glimmer in his eyes when he tells me about the people who donated a plant for each martyr, or the schoolchildren in Auckland who gifted them with a book filled with messages of hope and unity.

After another chaotic day of the media circus, he makes sure I am comfortable, relentlessly apologises for the delay, and consistently offers water and food in between rushing around, cleaning debris, and sorting out a barbecue they'll be having later.

Even families of the victims note how he has always been there for them and ensures he pays his respects and that they are well-fed. 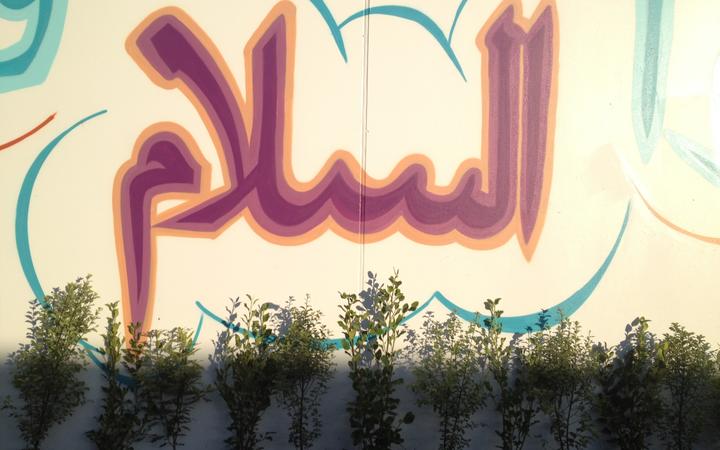 Plants in commemoration of the 51 lives lost in the Christchurch mosque shootings are put at Linwood Mosque underneath a mural of a saying from the Prophet. Photo: RNZ / Isra'a Emhail

One can understand why this gentleman is lauded as a hero. It's not just his actions on 15 March that embody this label - his care and attention to those around him leave me feeling humbled.

The younger men jump onboard and pitch in to help him clear the debris in the yard, and their cultural values and respect for elders shine through when he encourages them to hurry.

Time passes and the sun that was blinding our eyes earlier now dims and gives way for a bitter breeze to whip through. It's the perfect opportunity that brings up a casual Kiwi chat with Aziz about the weather, and the typical argument for any domestic traveller: Which has better summer, Christchurch or Auckland? 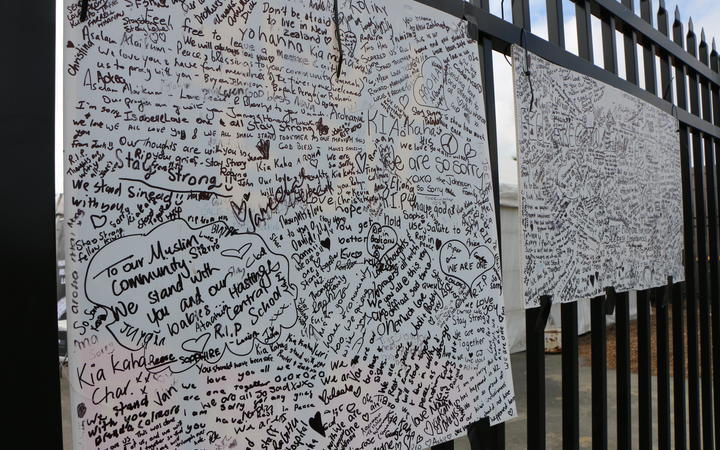 The Christchurch community has left messages for the Muslims at Linwood Mosque. Photo: RNZ / Isra'a Emhail

He roams around and casually hums a tune, they argue about what song it is, and in time we get to know a little more about our backgrounds. It's nothing unusual in Christchurch, considering I get asked 'where are you from?' at least three times a day in the city.

Our time is preoccupied with references and jokes that only Middle Easterners might understand - a mother's cooking, our hospitality of people, and the difference between languages Persians can speak.

We understand each other without knowing each other.

A kaleidoscope of Urdu, English, and Arabic mix and mingle, creating echoes through the mosque's courtyard. 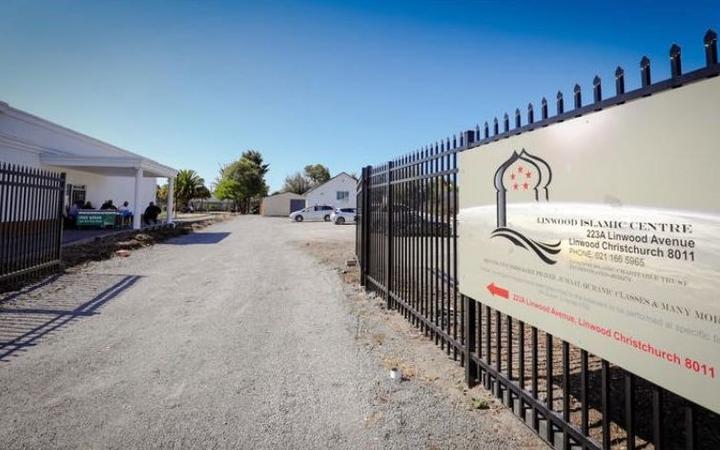 It suddenly strikes me, the normality of the past few hours.

It reminds of me when you hear people who go to places we deem to be dangerous, like Iraq, and come back saying 'life is normal there, people carry on'. I too used to doubt that.

But people there don't hide in their homes, peeking out their windows for the next sign of danger. Of course, you will notice soldiers out in the streets sometimes with their guns and the odd tank at certain places, which will be out of the 'normal' zone for your average Kiwi. Nevertheless, they go to school, go shopping, practice their religion, and have the same technology we do.

I saw hints of that survival at the Linwood mosque that day. The worshippers told me they continued to go to the mosque, regardless of what they saw that day and whether they felt safe now. They would not let fear swallow them.

The men roll up their sleeves and get to firing up the barbecue - something they've been doing for a couple of days ahead of the one-year mark - while I speak to the Imam about the new plans to build a tolerance centre onsite. And then it's time to leave.

Once again, I'm offered to stay and insisted upon to at least have a bite - their hospitality is nothing less expected of my Middle Eastern comrades.

As I trudge along the gravel rocks on the way out, hearing the echoes of the barbecue crew fade in the distance, the sun begins to set.

For the Linwood mosque, a new dawn always awaits. 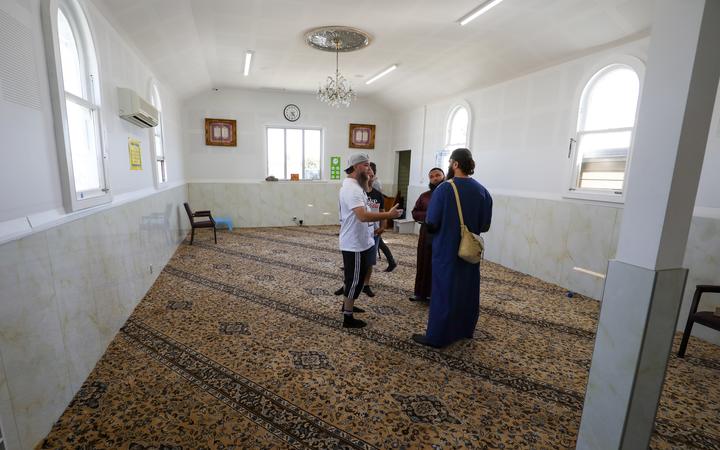