With stock markets falling and the impact of coronavirus biting into the economy, the government this week set out its strategy for dealing with what Finance Minister Grant Robertson called "one of the biggest uncertainties the global economy has seen in recent times". 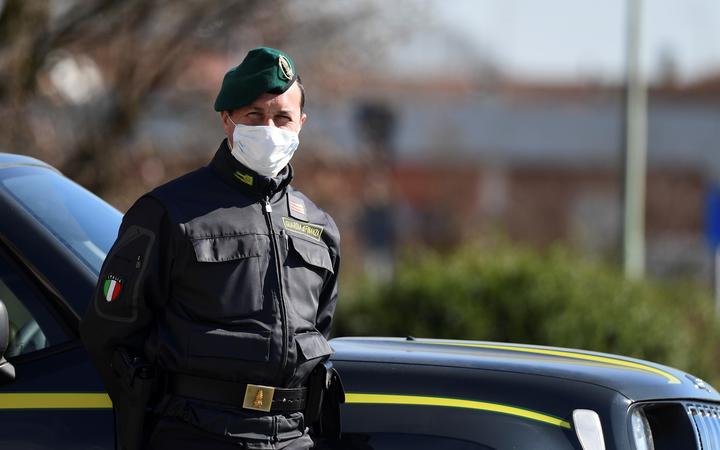 Italian police officer at a checkpoint at the small town of Zorlesco, southeast of Milan, on February 26, 2020. Photo: AFP

By the end of the week more than 80,000 people in more than 40 countries were infected and there had been 2700 deaths. The World Health Organisation warned it would be "fatal" for any country to assume it won't get cases.

New Zealand has only just confirmed its first case of the virus but, as it continues to spread around the world, exports have been held up and one of the major revenue earners, tourism, has taken a hit. The tertiary education sector is also suffering the consequences with an estimated 6000 Chinese students who should be here stuck in their own country. Victoria University in Wellington has said it expects to lose $12 million.

Finance Minister Grant Robertson, while emphasising that the government isn't predicting a worst-case scenario of global recession, has been preparing the public for economic bad news.

"The first two quarters of 2020 will be ones where growth will be hard to come by," he said.

That could turn out to be an understatement. Economic think-tank the NZIER is forecasting no growth for at least the first quarter, while ANZ chief economist Sharon Zollner says it's possible GDP growth will "simply stall over the first half of this year".

At Monday's post-cabinet press conference, Robertson explained the scenarios set out by the advisory council that has been set up. It includes the Treasury, the Reserve Bank and MBIE.

The first is the "short sharp shock" scenario, the second covers an extended period and the third is the global recession worst-case scenario.

They all require government intervention with increasing levels of intensity. It has already reacted to the first scenario by setting up the $11m tourism fund and anticipates it will have to do more. Plans are being made for re-deployment of workers in industries such as forestry.

Asked how the worst-case scenario would be handled, Robertson said it would require "a high level of intervention from the government in order to support people through it". That would mean loosening fiscal policy with the Reserve Bank likely to cut interest rates. The Ministry of Social Development is already tasked with preparing to help people who could lose their livelihoods.

It's a particularly difficult time for the finance minister, as he pointed out: "We're at the point now where we're making decisions about the budget, which is based on forecasts of how the economy will perform over the coming financial year." There is, as he said, a great deal of uncertainty around that.

While coronavirus and its impact was front and centre of politics this week, the four accused in the National Party's donations case made their first court appearance. All four - sitting MP Jami-Lee Ross and Auckland businessmen Zheng Shijia, Zheng Hengjia and Zhang Yikun - pleaded not guilty to charges of deception.

They were involved with the two donations of $100,000 which were broken into amounts lower than the disclosure threshold.

Outside the court, Ross read a statement saying he had never been involved in any deception to do with donations, and when they were made he was not aware of any conspiracy to defeat the Electoral Act.

He said he would continue to blow the whistle on "foreign donations" - the second time he has used that phrase. Ross doesn't intend making any further comments, he will wait for his time in court.

The four will next appear on June 10, and one of the defence lawyers, Rosemary Thompson, said the case was likely to eventually be transferred to the High Court. This isn't going to be over before the election.

National Party leader Simon Bridges caused a stir by saying that if his party wins it will consider imposing tit-for-tat deportation laws similar or the same as those Australia is using the send back New Zealanders.

"I don't think they could reasonably complain if we were to do the same here," he said.

Bridges' point is that successive governments have complained about Australia's actions with no notice being taken at all. Neither the Australian Labor Party nor the Liberals have budged an inch and they're not likely to - it's a popular policy with their voters.

Prime Minister Jacinda Ardern, just before leaving for Fiji and Australia, said she wasn't interested in any retaliatory action. "Australia is within their rights to do what they are doing, it doesn't mean that what they are doing is right," she said.

Ardern's stance is that she isn't going anywhere near policies she believes are wrong, and this one she "fiercely disagrees with".

If National does win the election, Bridges will have to live up to his word. He was, however, being very cautious and only said his party would "explore" such a move. Exploring policies can take a long time.

Ardern's trip to Fiji was another of her overseas success stories. She talked climate change with Prime Minister Frank Bianimarama, announced a $2 million donation to a fund set up to help relocate people displaced by climate change, and paid tribute to the three Fijian Muslims killed in the Christchurch terror attack. "They were yours, and now they are part of us," she said.

On Thursday she left Fiji for Australia and talks with Prime Minister Scott Morrison, the hard part of her foreign mission. Ardern confirmed before she left she would again raise the deportation issue but she won't be "wagging her finger" at him over climate change and Australia's less than enthusiastic response to it.

Parliament was in recess this week, and so not much was heard of NZ First leader Winston Peters. There could be next week. On Thursday Stuff published a long list of donors saying: "A raft of multimillionaire rich-listers are among the funders of Winston Peters' NZ First Party, donating large and undisclosed sums to a slush fund now being investigated by the Serious Fraud Office." On the same day, RNZ revealed the NZ First Foundation (the slush fund referred to by Stuff) received $100,000 in just one week from two rich-listers whose donations remained secret because the individual payments fell below the disclosure threshold.

Although Peters is sure to be confronted by the media when Parliament resumes, there are indications he could continue to stonewall and use Facebook to get his message across free from irritating questions.

Politik reported, under the headline NZ First Goes Trump, that the party had sent an email to its supporters asking for donations to a "fighting fund to run campaigns that get our message direct to voters rather than the media filtering everything we say". There were similarities to US President Donald Trump's "fake news" attacks on the media. "The 'Media Party' have not liked it when we have told the truth about them, and we expect them to continue campaigning against us in the lead up to the election," the email said. "NZ First stands up for those who some in the media loathe… help us beat the 'Media Party' and the liberal elite who have always opposed people like us."