The New Zealand share market opened lower on Friday, following a sixth day of world market losses as investors respond to the economic threat of coronavirus. 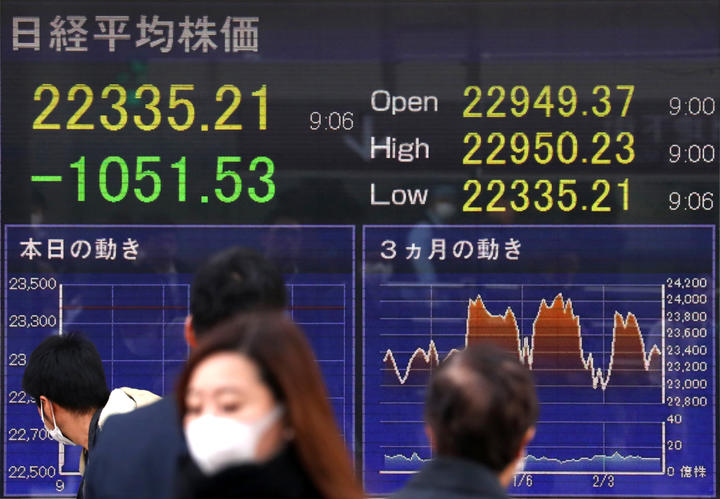 The plunge in the Nikkei Stock Average on 25 February shown on a display in Chuo, Tokyo. Photo: AFP / Yomiuri

The benchmark top 50 Index has fallen more than 330 points - about 2.9 percent, with falls across the board.

Virtually every company in the main index has fallen, with the sharpest drops for tourism and travel related companies and those heavily involved with China.

Several companies reporting their earnings this morning, including the Port of Tauranga and Tourism Holdings have warned of a hit to earnings from the virus.

Markets have been spooked this week as investors fear the economic impact of the coronavirus will be worse than first thought, as it spreads to more countries.

The string of declines pushed indexes in Europe and the US down more than 10 percent from their recent highs - sending them into so-called "correction" territory.

In the US, the three main indexes slumped more than 2.5 percent in opening trade, while London's FTSE 100 closed 3.5 percent lower.

In the US, the indexes were poised for their steepest week of declines since the 2008 financial crisis. Globally, the share price declines of the last six days have wiped out more than $US3.6tn.

The moves come as the outbreak, which started in China but is rapidly spreading, weighs on the economy, restricting travel, causing manufacturing slowdown in China and upending global supply chains.

In recent weeks, companies across industries - from mining firm Rio Tinto to software giant Microsoft - have said that they will not hit sales targets.

Economists, many of whom had originally expected the virus to be a temporary blow, are also sounding warnings.

At an event on Wednesday, former US Federal Reserve chair Janet Yellen suggested it could tip the US into recession, while Goldman Sachs told clients it did not expect companies to see any profit growth this year.

"Our reduced profit forecasts reflect the severe decline in Chinese economic activity... lower end-demand for US exporters, disruption to the supply chain for many US firms, a slowdown in US economic activity, and elevated business uncertainty," the firm wrote.

The coronavirus has infected nearly 79,000 people in China and killed more than 2,700. More than 3,200 cases and 51 deaths have been reported in another 44 countries.

Investors around the world are now looking to see if central banks respond with efforts to prop up the economy.

Germany's Economy Minister Peter Altmaier said that while the impact of the virus so far had been limited, the country was considering how to respond should it worsen.