Opinion - US billionaire Peter Thiel has caused a stir by wrangling a citizenship without the usual requirements, but what does he want with Aotearoa? Toby and Toby weigh in. 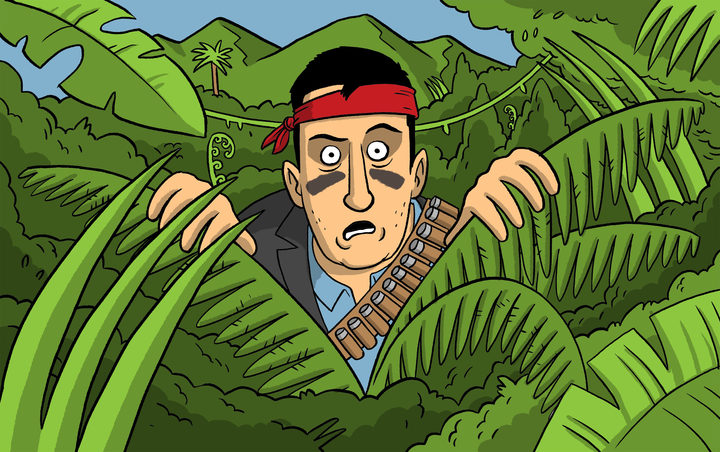 Straight to the big question. How do you pronounce "Thiel"?

As in Teal, the Tasman Empire Airways Limited, forerunner of Air New Zealand?

Is that how he got his New Zealand citizenship?

No. He was granted New Zealand under an "exceptional circumstances" public interest clause, despite, we learned last week, having only spent 12 days in New Zealand.

How many of those days were taken up by popping over for the citizenship ceremony itself?

Zero. Mr Thiel swore his allegiance to the Queen and Aotearoa in a ceremony at the picture-postcard New Zealand setting of a Santa Monica consulate.

And is 12 days more or less than the mandatory 1350 days over five years for would-be citizens?

It is a smaller amount of days. Thiel also failed to meet the requirement that he intended to actually live in New Zealand. Hence the exceptional circumstances.

And what exceptional circumstances were those, please?

Bit of philanthropy, in the form of a million bucks to the Christchurch earthquake recovery, a bit of investment in New Zealand start-ups. You know.

Unlikely. But he has, according to Nathan Guy, the minister who signed off his citizenship, been a "fantastic ambassador" for New Zealand.

Is there any actual evidence of him being a fantastic ambassador for New Zealand?

Then how do we know he has been a fantastic ambassador for New Zealand?

And how rich is he?

Forbes most recently estimated his wealth at US $2.7 billion.

What is that in New Zealand currency?

According to Minister Guy, people are only exercised by the Thiel story because he is a close ally and vocal and financial supporter of President Donald Trump. Is there anything else that makes him interesting?

Yes. But really the troubling thing about Citizen Thiel is it has the appearance of a back-room deal.

For would-be residents, investor provisions are clear: they're written down. It could well be that people are happy for a chequebook to open the door to citizenship. If so, let's lay it out clearly say, for argument's sake, $100 million investment in New Zealand companies, a $50 million donation to hospitals, and a Fruju for every Kiwi battler.

If Thiel hasn't - and apparently doesn't plan to - live in New Zealand, why did he want citizenship in the first place?

Could be the whole vibe-ambassador thing. Citizenship also means you don't face Overseas Investment Office scrutiny. And it may also be part of the "apocalypse insurance" cavalcade.

The Citizen Thiel imbroglio has wound into a wider story about New Zealand as a target for wealthy foreigners seeking to gain "apocalypse insurance" - a bolt-hole should everything turn to custard thanks to political instability, climate change catastrophe or some other natural disaster.

What is it that attracts them to New Zealand?

Probably not the prospect of the Alpine Fault unzipping the South Island, the Hikurangi Subduction Zone going boom or the live volcanic field on which our biggest city is settled.

A New Yorker feature this year explored the phenomenon of Silicon Valley tycoons who have sought out escape routes for a dystopian future. These super-wealthy survivalists, or elite "preppers" have looked to islands off the US, high-security apartment complexes built into old missile holds - and New Zealand.

Jack Matthews, the American chairman of MediaWorks NZ, told the magazine, "I think, in the back of people's minds, frankly, is that, if the world really goes to shit, New Zealand is a first world country, completely self-sufficient, if necessary - energy, water, food. Life would deteriorate, but it would not collapse."

How many of these doomsdayers are descending on Aotearoa?

Most of it is anecdotal - but clicks on New Zealand's migration info site show interest has spiked, and that has been variously attributed to apocalypse insurance seekers, Brexodus, Trumpugees and other made-up words.

It has also captured the imagination of story-tellers, with the plot for Booker-winner Eleanor Catton's next novel involving "ultra-rich foreigners building ... fortress-like homes", various film projects rumoured to be in development, and a pitch-perfect satire that recently aired on NBC.

Called The Americans Are Coming: the Obsession with New Zealand, it features a Troy-McClure-style narrator telling Sam Neill (who plays himself) in a hushed voice: "Have you heard, there's a code word for apocalypse insurance, and that's 'New Zealand'." 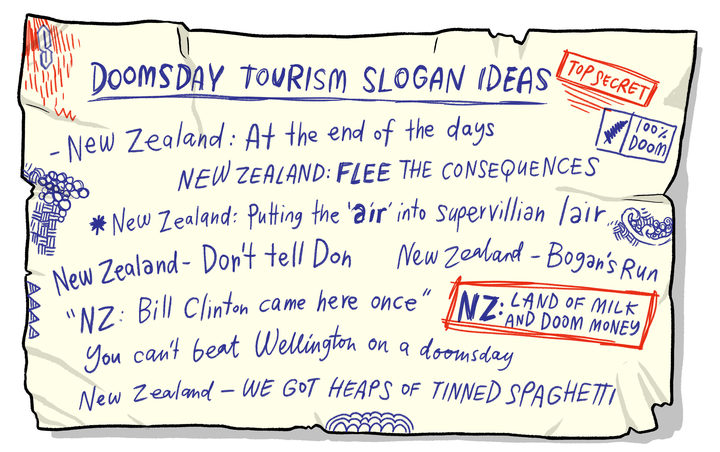 Hard to blame them, really.

The squillionaires. Why not grab a slice of heaven, just in case?

Maybe. But let's fade out on the thoughts of Max Levchin. Like Thiel, he's a PayPal founder, but instead is a survivalist skeptic.

He told the New Yorker, "It's one of the few things about Silicon Valley that I actively dislike - the sense that we are superior giants who move the needle and, even if it's our own failure, must be spared".

His advice to "shut down party conversations" on the matter?

"I typically ask people, 'So you're worried about the pitchforks. How much money have you donated to your local homeless shelter?'"