The government is defending its decision to grant US billionaire Peter Thiel citizenship despite him having spent only 12 days in New Zealand. 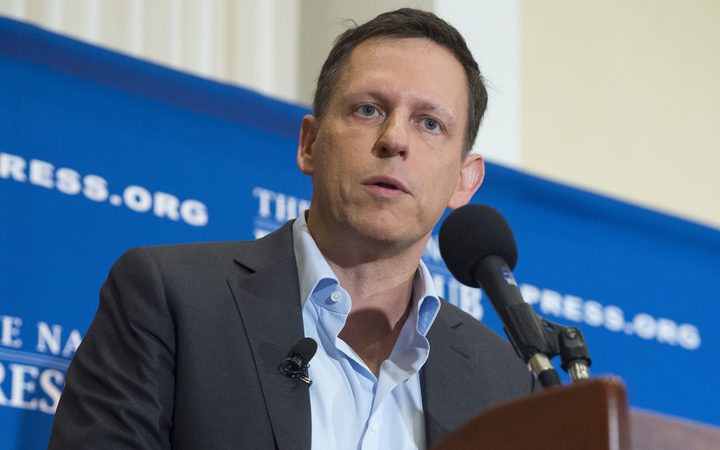 The Department of Internal Affairs was forced to reveal the fleeting nature of the entrepreneur's time in the country yesterday after RNZ complained to the Ombudsman.

Mr Thiel, 49, was granted citizenship in June 2011 under exceptional circumstances despite not having lived in the country previously and not intending to do so in the future.

The 12 days he spent in the country were split over four trips during a five-year period. Normally a permanent resident has to spend 1350 days in the country over five years before they can apply for citizenship.

Prime Minister Bill English described the PayPal co-founder and Donald Trump supporter as an "assiduous investor" and said the focus on his length of stay was "a bit misleading".

"Exceptional circumstances are allowed for under the law.

"This is someone who's invested here - helped create at least one very successful business [in software firm Xero] and we're happy with it."

"We do want to attract investors - particularly investors who can underpin such a successful company as Xero."

Mr English rejected the suggestion that meant people could in effect purchase citizenship.

"It just means that we've got some discretion where we think a particular contribution can be made."

However, he did not know the extent of the Mr Thiel's investment in New Zealand, nor if he even remained an active investor.

"Uh, you would have to check with him about his business operations, I don't have any knowledge of them now."

Asked if he'd ever met Mr Thiel, Bill English said he would have to check, but may have met him once as finance minister.

Ms Ransom said Mr Thiel had demonstrated "no commitment to the country" by spending just 12 days here and the decision to give him citizenship "should never have happened".

The minister who granted citizenship, Nathan Guy, yesterday said he was "very comfortable" with his decision, describing Mr Thiel as "a great ambassador".

"This individual is an exceptional circumstance. He's a fine individual. Good character. He's invested a lot in New Zealand. He's got a lot of reach in the US."

He told Morning Report if New Zealand wanted to attract investors it should set specific requirements they had to meet.

"You need to know the value of that money and what it has done for the creation of wealth, particularly exports and employment in New Zealand."

But Mr Hamilton said the investments appeared to have dried up of late.

"Maybe the disappointment is that his attention has gone elsewhere ... I think Peter Thiel still loves New Zealand. But he's not investing here like he did."

Mr Hamilton said he had been having second thoughts about Mr Thiel's application.

"Did we need to grant him citizenship - for someone that appeared to already like New Zealand?

"The minister must have considered that," he said.

"From my point of view, as a supporter of New Zealand business, I want, businesses want, friends and investors who can open up markets."

"Peter Thiel could have made all the investments that he has made as a resident. He didn't need citizenship."