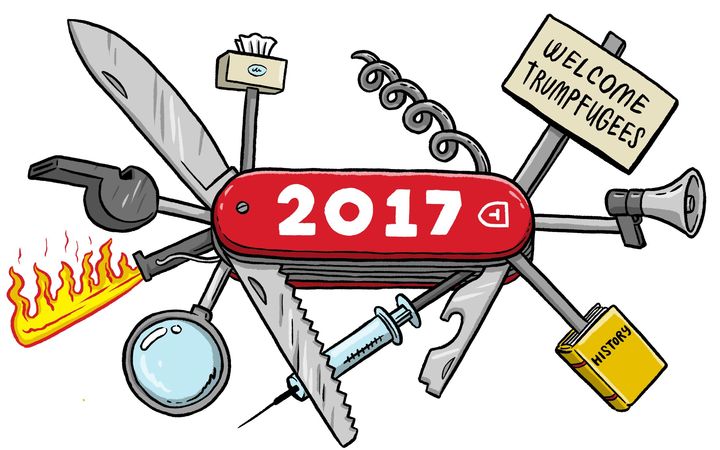 Well done, you've made it most of the way through the first month of 2017. And you look just fine.

There is, however, a long haul to go - more than 11 months, if our calculations are right - and we therefore present a cut-out-and-keep User's Guide to 2017. (In truth, cutting it out is probably not a great idea, especially not before printing.)

For your convenience, we have assembled the guide under a series of headings. Some readers may complain there is an unacceptable western slant. Others may object that we are yet another outlet displaying shameless liberal bias against a contemptible, dangerous and thin-skinned man-baby president-elect. We would advise you to write immediately to the Minister for Broadcasting.

This is chiefly because there is no longer a Minister for Broadcasting.

The United States of America

20 January, Friday in DC (Saturday NZT), will see the inauguration of the 45th US president, Donald J Trump. Following his election in 2016, which you may have seen reported in the news, he has made a mockery of predictions that he would suddenly become more conventionally presidential, sticking instead with the fuming denunciations and Twitter tirades. There is no reason to believe that will magically change next week.

After the 2016 crisis in the soothsayer market, only fools would make predictions, so here are ours. The new president's relations with the press and the intelligence community will remain arse-clenchingly tense. Trump's relationship with Russia's Vladimir Putin will be the most watched and influential in contemporary geopolitics.

Reports of Kremlin TV celebrating Trump's remarks disparaging Germany prompted historian Simon Schama to write: "This is the darkest week imaginable for the post WWII order which has kept peace and prosperity in Europe for three quarters of a century." More of that cheery theme below!

Pressure will mount over Trump's perceived lack of divestment and conflicts of interest, with impeachment demands gathering steam. The Iranian nuclear deal and the Paris climate pact will erode. Fault lines will emerge between Trump and Republican majority congresspeople, as well as within his own administration, which includes Brietbart's Steven Bannon as chief strategist, Republican establishment stalwart Reince Priebus as chief of staff and conspiracy theory enthusiast Michael Flynn as national security adviser.

Facebook zillionaire Mark Zuckerberg will have some kind of moral crisis and lurch into public life.

And across the Atlantic ...

7 May, the second round of the French presidential election, when Marine Le Pen, leader of the far right National Front, hopes to surf the anti-immigrant, anti-globalisation tide of 2016 to victory.

Following last year's referendum, British PM Theresa May will trigger Article 50, formally notifying the UK's intention to withdraw from the European Union. The negotiations, premised on a "hard Brexit" that accepts regaining full control over migration means kissing goodbye to the single market, will get ugly. Other EU nations will strive to avoid providing a deal that looks tempting for others. Scotland will meanwhile agitate for another referendum on independence. Britons and much of the world will gasp every time the 90-something Queen sniffles or fails to make a shopping mall opening.

Elections across the continent will test the levels of populist emboldenment post-BrexiTrump. In mid-March, the far-right, anti-Islam party led by Geert Wilders is on course to win the most seats in the Dutch parliament, though probably will be locked out of government. In France, Le Pen is on course to win the first round, though moderates are banking on a collective effort to ensure she is beaten in the second round, where her rival is likely to be the former conservative PM François Fillon.

Angela Merkel remains odds-on to hold power in Germany's federal elections in September, but while no compelling figurehead has emerged as a lightning rod for populist sentiment, far-right candidates look set to win parliamentary seats for the first time since the war. A perfect populist storm in these European elections could leave the union on the brink of an unravelling.

Then there's NATO. The military alliance of the US, Canada and 26 European nations faces strain as Trump, soon to be leader of easily the powerful member, casts doubt on its viability. Putin, whose interventions in Ukraine have been previously opposed by Nato members, is loving it.

Do say: Will Eurovision be affected?

In China, Xi Jinping is expected to attempt to solidify his power base at the congress, perhaps even paving the way to extend his power beyond the conventional two-term presidential limit.

Nipping on the heels of China in economic growth and population terms, India's global heft will be felt more than ever in modern times. In the Middle East, the Isis caliphate will subside further, while its offshoots, and those of al-Qaida will regroup and emerge in other parts of the region and world.

America's relative muscle may be diminishing, but it remains the most powerful country on earth. International stability could be tested in the space of 140 presidential characters.

With the US carbon economy resurgent, hopes of curbing climate change will struggle, and coral reefs, vulnerable climate exposed populations, ice sheets and polar bears will stare down the barrel.

Don't say: That was mostly about Asia, apart from the polar bear bit.

Do say: It was fine.

And beyond even elsewhere ...

An election-year mood from the outset, with the contenders choosing their themes and attack-lines and banging those drums deep into the night. There will be more policy focus than you might expect, with security in a wobbly world, economic development and the housing crisis particularly in focus. Bill English will be challenged to carve out a fresh vision, Andrew Little will be challenged to keep the Labour-Green tandem from toppling and prove he's a plausible alternative. Winston Peters will denounce all challenges as demonstrably moronic.

Do say: The Lions will really give us a run for our money.

Don't say: "The centre-right National Party government under the prime minister, John Key, will serve out its third consecutive term to elections to be held by November, and given Mr Key's enduring popularity and the poor standing of the opposition, a fourth term is on the cards." (The Economist World in 2017)

Twenty-one days before or after your birthday.

We have used science to build a high-powered What (Not) To Say™ algorithm. Simply close your eyes and count from your age backwards to zero, then open your eyes, and follow the instructions on the screen.