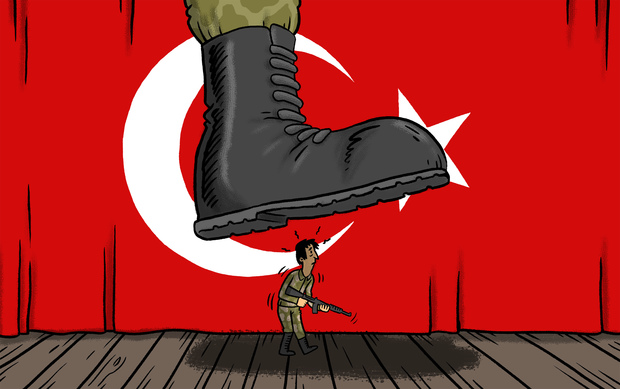 Why "that wasn't"? Is there something in the "staged coup" theory?

No, it's just that the coup didn't succeed.

A faction within the armed forces launched an attempted coup on Friday night with President Tayyip Erdogan away on holiday. Using tanks, aircraft and helicopters the so-called Peace at Home Council swarmed the capital Ankara and the largest city, Istanbul, blocking the Bosphorus Bridge. At least 290 people were killed and more than a thousand injured.

As noted above in the words "the coup didn't succeed", the coup did not succeed. President Erdogan returned to a rapturous welcome at Istanbul's Ataturk Airport early on Saturday morning.

And why did it fail?

Analysts point to a lack of penetration within the military chain of command, a relatively sparse arsenal and signs of a hasty launch after authorities became suspicious. Crucially, there was no sign of widespread popular support, with civilians taking to the street in defiance of coup leaders' instructions. Among the pro-coup forces there was "an air of amateur desperation" according to one observer. A presenter on CNN, which was raided by armed coup supporters, said the soldiers were young men with "only fear in their eyes and no sign of devotion or determination".

So it didn't come close to overthrowing the government?

Some have argued it never stood a chance. Senior Turkish officials have since said, however, that contrary to reports of amateurishness, the coup was well planned and almost succeeded, while fighter jets flown by coup sources reportedly forwent opportunities to shoot down Erdogan's plane as it flew him back to Istanbul.

Could that be because the whole thing was staged?

What motivated the attempted coup?

Members of the Turkish military have long believed they have a special role in protecting the secular character of Ataturk's nation, and professed alarm at the increasingly authoritarian and Islamist bent of Turkey under Erdogan - who had also been working to reshape the constitution to dilute any special status for the military. According to a statement, which rebel soldiers forced a Turkish state television presenter to read, "the democratic and secular rule of law has been eroded by the current government", prompting the so-called Peace Council "to reinstate constitutional order, human rights and freedoms, the rule of law and general security".

Yes. One young liberal Turk put it like this: "The worst democracy is better than the best coup."

Who was behind the revolt?

A recent head of the air force and an ousted senior military legal adviser were quickly blamed by government officials. They are accused of acting in collaboration with Fetullah Gulen, the cleric who leads from exile in the US a popular movement called Hizmet and is charged with trying to establish a "parallel structure" within the judiciary, armed forces and police. Erdogan has accused him of "terrorist" actions and sought his extradition.

What does Gulen say?

He says such claims are nonsense, and that Erdogan very likely staged the whole thing to solidify his power and reinforce his autocratic regime.

How has Erdogan responded?

After the putsch, the purge. In attempt to root out what Erdogan called a "virus", close to 20,000 police, soldiers, civil servants and judges have already been detained or suspended. Even thousands of teachers have been suspended. Erdogan is also toying with the idea of reintroducing the death penalty.

Does this show that the coup was staged?

Conspiracy theories abound, and a third of Turks, according to one poll, think it was a set up. But any evidence is thin. What it does show is that the coup is being ruthlessly exploited.

Is there some irony in the fact that Erdogan, who has been ruthless in cracking down on digital communications in Turkey to curb demonstrations since the Arab Spring, used the mobile-phone chat service FaceTime at the height of the coup to communicate his message of defiance and exhort people to demonstrate?

How did world leaders respond?

Despite having a frosty relationship with Erdogan, President Obama spoke in support of the elected leaders. That was broadly reflected around the world, some of whom noted the crucial role of Turkey in the region, particularly in relation to the Syrian conflict. Egypt, however, blocked a UN Security Council statement calling on all parties to "respect the democratically elected government of Turkey".

Why did a country led by a military ruler who overthrew an elected government block such a statement?

And what about Britain?

Didn't he recently write a poem about the Turkish president having sex with a goat?

He did. But he avoided the allure of verse in calling for "restraint and moderation" after recent events. Although he did refer to the "crisis in Egypt", when he almost certainly meant "crisis in Turkey". Twice.

Is this coup a first for modern Turkey?

And how many of them were staged? 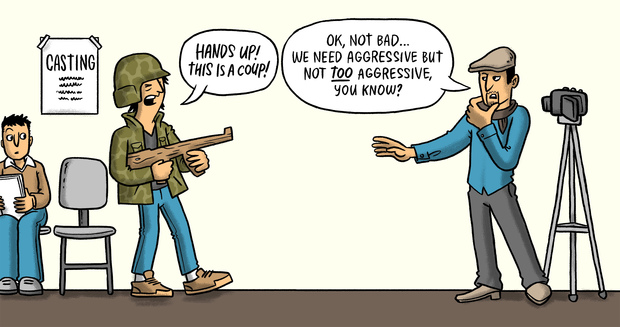 *This column is part of a weekly series published every Wednesday, by graphic artist Toby Morris and journalist Toby Manhire.