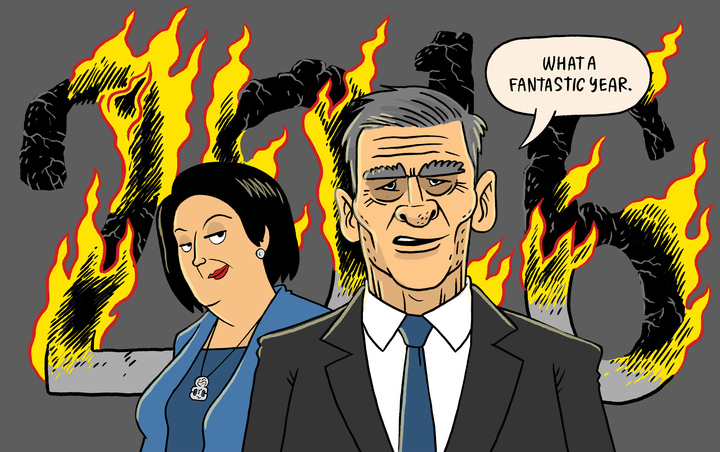 How did it look at the start?

That was how New Zealand's leading animated Q&A based column depicted the year in January.

And it went downhill from there.

Pretty much. By June, New Zealand's leading animated Q&A based column was bewailing the serial deaths of luminaries, declaring:

What is this, a highlights reel?

If you insist. Here's a good one, from June:

Saying "no more dying" did not work.

That's true, death did not stop after the likes of David Bowie, Prince and Muhammad Ali departed. They were joined in 2016 by many more famous faces including Victoria Wood, Ray Columbus, Helen Kelly and Leonard Cohen.

Party time at the Pearly Gates.

Is there more than death?

What a fascinating ontological question.

No: is there more than death to make 2016 so diabolical?

Yes. The planet convulsed, with deepening, horrific tragedy in Syria and an ongoing refugee crisis. Orthodoxies were blown apart by the British vote to exit the European Union. And creepy clowns stalked the earth after a terrifying mutation in the Pokémon Go source code.

Sure about that last bit?

Yes, he ruthlessly forced on the world a diet of fake news and post-truth politics.

No. But as the boss of the world's most powerful media organisation he did bugger all to halt the rise of "truthful hyperbole".

What is truthful hyperbole?

"People want to believe that something is the biggest and the greatest and the most spectacular. I call it truthful hyperbole."

How's the environment coming along?

The planet continued to gasp like a chain smoker towards its grave, with dramatically disappearing ice caps, an eroding, bleached Great Barrier Reef, and signs of the hottest average global temperature on record, according to Nasa.

Jeepers. Is anything being done about it?

What's so wrong with Trump?

Apart from the pathological lies, the boasting about sexual abuse, the countless allegations of dodgy business practice, the toddler temper tantrums, pouring petrol on embers of racial and religious hatred, and almost certainly having been elected with the help of Kremlin-sanctioned hacking of his opponents' email accounts and receiving almost three million fewer votes that Hillary Clinton, quite a lot, really.

Hasn't the transition been reasonably reassuring?

One of his cabinet appointments considered to the face of acceptability and a moderating force is a former general with the nickname "Mad Dog".

At least New Zealand is a haven.

They do. Brexit. Trump, and now the election of Judith Collins as leader of the National Party and prime minister.

Of course. Birthdays were celebrated. Justin Trudeau explained quantum computing. Human babies and puppies were born. There were major advances in medicine, on cancer and HIV, and more. Wallonia asserted itself. The greatest rugby side ever to contest the Super Rugby competition at last won the trophy. People swam in the sea. They stared awestruck at something.

RNZ turned off comments on its online internet website.

So lamestream bleeding heart shills like Tony and Tony don't have to face up with ordinary peoples views!

According to a report last week, scientists say "life on Earth will be burned to a crisp in five billion years' time".

Isn't it true, though, that years are essentially arbitrary categories of time, and contain no intrinsic meaning or magic.

Anyway, the year is over.

On that front, there's good news and there's bad news.

The bad news is there's still 17 days to go?

That's part of the bad news.

What's the other part?

The other part is that all the woe-2016 stuff assumes that this year is an aberration. Rather than a trend.

Happy Christmas, unnamed and strange answery text. You going to be OK? 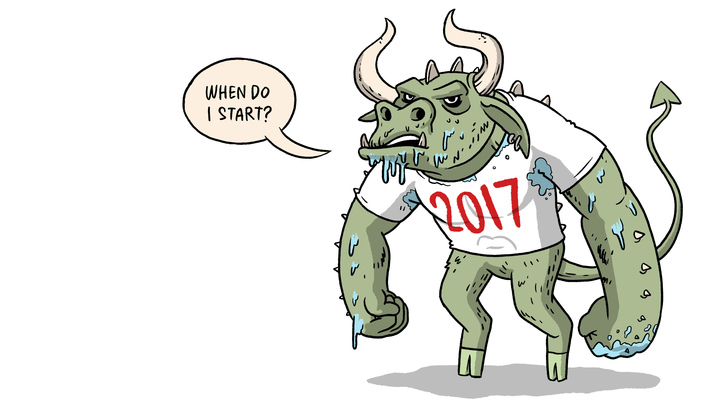