Opinion - Donald Trump's desired cabinet is slowly taking shape, as he drip-feeds his choices. Phil Smith decodes some of the picks. 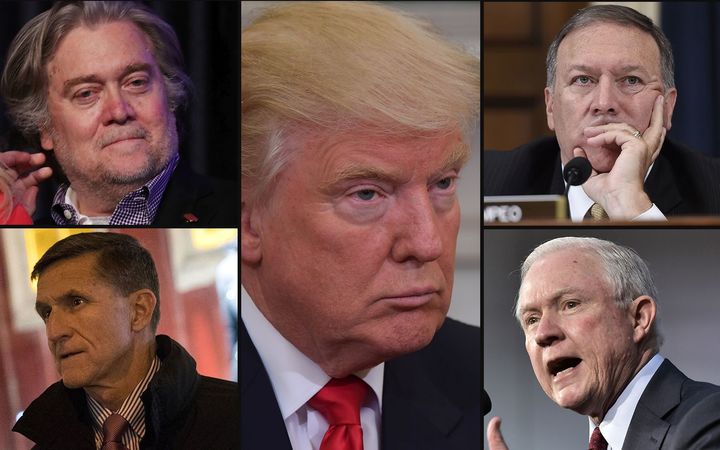 Donald Trump, centre, and some of the men expected to take up high-powered positions in his government; clockwise from top left: Steve Bannon, Mike Pompeo, Jeff Sessions and Mike Flynn. Photo: AFP

No man is a bureaucracy, so Mr Trump has to hire at least 1000 people to help him form a government. Most importantly, he has to select a Cabinet.

He can choose anyone except family - there's been a law against that since John F Kennedy appointed his brother as Attorney-General. Most presidents choose independent experts or career government servants. Sometimes the appointments are the result of political deals, and sometimes they are the best woman for the job.

The picks can indicate a president-elect's intentions. For example, when Barack Obama nominated Nobel physicist and renewable energy advocate Stephen Chu as Secretary of Energy, it showed his speeches on oil dependency and climate change weren't just rhetoric.

Mr Trump's transition team started slowly, and then he sacked transition leader Chris Christie and they started from scratch, so it's taking a while. Here are a few of the key ones.

The white power behind the throne

Chief Strategist - Steve Bannon: The Breitbart boss has been given a powerful role that doesn't require Senate confirmation. Mr Bannon has described Mr Trump as his candidate, and likely sees himself as an éminence grise, in the mold of "Bush's Brain" Karl Rove.

He's a leader of the alt-right movement - about which the Associated Press issued an editorial guideline this week, saying that the term is preferred by people with beliefs we would traditionally call "racist, neo-Nazi or white supremacist".

The appointment suggests the campaign's racism might become anti-immigrant and anti-Muslim policy. Amongst those who cheered the appointment were the Ku Klux Klan and the American Nazi Party, whose chairman told CNN that the appointment showed that "maybe The Donald is for real".

A fox in the henhouse?

Attorney-General - Senator Jeff Sessions: You would expect the Justice Department to reign in the less constitutional ideas, from waterboarding to a register of Muslims. Overseeing that, as things stand, will be Senator Jeff Sessions from Alabama. He's a former US Attorney and member of the Senate Judiciary Committee, so someone with experience in a Cabinet short on practical governance.

But in 1986, when Ronald Reagan nominated him to a federal judgeship, he was rejected by a Republican-controlled Senate on grounds of racism.

He's been a steadfast Trump loyalist, such as when he assured the Weekly Standard that grabbing someone by the "pussy" did not characterise sexual assault. So, that's OK then.

Health and Human Services - Tom Price: The Georgia Congressman is a former orthopaedic surgeon and current House Budget Committee chairman. He'll resign from Congress to take this role because, unlike here, the Cabinet is not a sub-set of the legislature.

Mr Price has led attacks against Mr Obama's healthcare reforms. His idea is for personal savings accounts to replace "Obamacare", and for a system of malnourished block grants to states to support 'high risk pools' of those who can't afford insurance because insurers will be able to increase premiums on the old and ill. Long-term, this is likely to be one of the least popular moves of the Trump administration.

Ms DeVos is a campaigner for "school choice" and against Common Core. Decoded, that means she's against a national curriculum and mandated standards (which are anathema to the Christian right for not including creationism in science); but she is for voucher programmes, whereby you get government money to help pay for private, religious or home schooling.

The teachers' union is beside itself, saying "Trump makes it loud and clear that his education policy will focus on privatizing, defunding and destroying public education in America".

We know of two of the security bosses thus far: CIA Director and National Security Advisor. Congressman Mike Pompeo from Kansas has been nominated to run the CIA. This appointment seems to be based on this Tea Party Republican being very antagonistic to the nuclear disarmament deal with Iran, very keen on bulk data collection, and a leading attacker of Hillary Clinton in the endless congressional Benghazi inquiries.

He is also remembered for defending waterboarding and calling American Islamic leaders complicit in the Boston bombing. So he indicates a return to a much more Bush-era and Hawkish intelligence community.

Retired Lt General Mike Flynn has been tapped for National Security Advisor, the key security/intelligence advisor inside the White House. He has been utterly loyal to Trump and is being rewarded.

But he makes the ethics accusations against Mrs Clinton fade away. He is apparently being paid by Turkey to lobby on its behalf, has ties to Russian government propaganda TV channel RT, created his own internet connection while working at the Pentagon after being ordered not to, and against explicit orders shared classified information with NATO allies.

He believes Islam is not a religion and tweeted earlier this year that "Fear of Muslims is RATIONAL". He's not likely to be the voice of reason to salve President Trump's worst fears.

Mr Trump made promises to "drain the swamp" in Washington while out on the campaign trail, but the finance team looks set to be a billionaire corporate raider - Wilbur Ross (Commerce), and a billionaire hedge fund manager and former Goldman Sachs partner, who made millions repossessing homes after the 2008 mortgage market collapse - Steven Mnuchin (Treasury).

And for Transportation it's long-time Washington insider and former Secretary of Labor Elaine Chao, who is married to Senate Majority Leader Mitch McConnell. The alligators will breath a sigh of relief.

What we don't know yet is who Mr Trump is intending for: State, Defense, Interior, Agriculture, Labour, Housing and Urban Development, Energy, Veterans Administration, Homeland Security and the Environmental Protection Agency.

Phil Smith is an award-winning journalist who has reported for RNZ from China, India and Australia. For the past 10 months he has been RNZ's guru and guide on the byzantine minutiae of American politics.