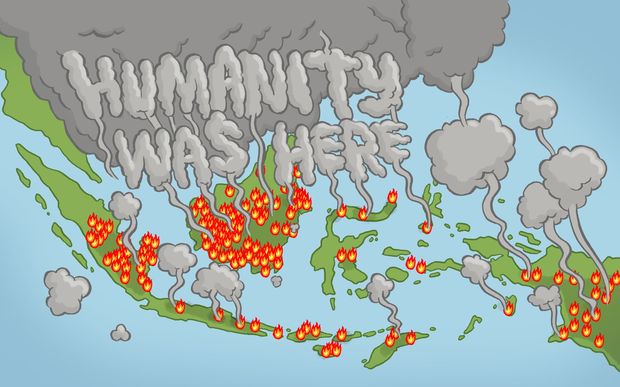 What is this catastrophic inferno of which you speak?

Over the last two months, more than 100,000 fires have blazed across Indonesia, destroying forests and peatland, and spewing a massive pall of toxic smoke across the region.

More than 20,000 sq km of forest has gone up in flames in five months. As revealed in dramatic photographs taken from space by Nasa, the noxious cloud has reached over Malaysia, Singapore, Thailand, Vietnam, Cambodia and the Philippines.

About 40 million people have inhaled the fumes. In Sumatra and Kalimantan at least 19 people have died as a result, while the National Disaster Mitigation Agency estimates that the haze has left more than half a million Indonesians with acute respiratory illnesses

A bugger for holidaymakers, too what with the closure of the airport in Bali.

That is unrelated, caused by volcanic ash from Mount Rinjani. The infernos are not natural disasters.

The fires, which the government has deployed about 22,000 troops to fight, are mostly lit deliberately, by farmers burning off land to clear room for grazing livestock, or planting crops, especially oil palm and pulpwood.

The damage of so-called "slash and burn agriculture" is amplified by the burning of the carbon-rich peatfields, which smoulder stubbornly, are difficult to extinguish and emit dramatically greater pollution than a normal fire.

Sutopo Purwo Nugroho, of Indonesia's disaster agency, says 99 percent of the fires were started deliberately, and "this is an extraordinary crime against humanity."

It must be terrible for the environment.

You can say that again.

It must be terrible for the environment.

Methane-rich peat fires are especially vicious, with their impact on global warming, according to one estimate, as much as 200 times greater than other fires.

The blazes have also entered deep into forests, including national parks on Borneo, putting at risk a third of the world's wild orangutan population.

Has this happened before?

It is an annual occurrence, but hasn't been this bad since 1997. Then, as in 2015, a powerful El Niño effect in the Pacific created a severe dry spell.

Why not just ban the burn-offs?

It is legal for small farmers to burn up to two hectares (0.02 sq km), but enforcement is slipshod, ownership is often unclear, and corruption is rife. Much of the land was handed out in concessions by the former President Suharto as part of his patronage network. The whole system has been blighted by cronyism and confusion since.

What then is being done?

Indonesia's President Widodo last week cut short a US visit, following a meeting with President Obama, saying he wanted to lead the response to the crisis.

He has ordered the Forestry and Environment Ministry to halt issuance of permits for peatland cultivation for monoculture and to review all existing permits, called for the diversion of canals that were dug into peatland to dry it out, and instructed officials to improve mapping of terrain.

Too little, too late, say critics, with many pointing the finger at large companies at the end of production chains profiting from the use of palm oil and pulpwood.

Anything but bold action by government and business would "embolden the campaign launched in Singapore and Malaysia to encourage consumers to boycott Indonesian products such as pulp, paper and those containing palm oil," writes Vincent Lingga, senior editor at the Jakarta Post.

"We will also become the ugly guy during the climate change summit in Paris in December."

Any criticisms from the neighbourhood?

Yes. Singapore's environment minister has begun legal action against Indonesian companies, and urged Jakarta to be firmer in cracking down on those who are "starting fires, mismanaging land, and causing harm to people in the region."

Vice-president Jusuf Kalla had this to say on Singapore's concerns:

"For 11 months, they enjoyed nice air from Indonesia and they never thanked us. They have suffered because of the haze for one month and they get upset."

Actually there has been plenty of rain over the last week, most of it natural, some of it encouraged by cloud-seeding technology.

That's all right then.

Hardly. There has been more rain in some provinces than others, and with the dry-cycle still under way, smouldering peat fires could yet spark more blazes.

Nevertheless, with the worst probably over, the great risk is that it is forgotten.

Nigel Sizer, of the World Resources Institute, says it is crucial "that we don't forget about all this once the rains finally move in". In the past, he tells Vox, "there's always [been] lots of media coverage and promises to fix things, but eventually the fires die out, everyone moves on to other things, and people forget. Hopefully this time it was so serious, that that won't happen."

* This column is part of a weekly series, to be published every Wednesday, by graphic artist Toby Morris and journalist Toby Manhire.