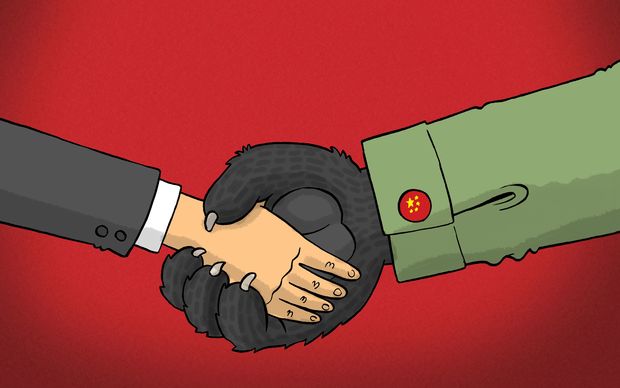 What is this panda diplomacy of which you speak?

News arrived this morning that Gerry Brownlee is engaged on a secret panda-based diplomatic mission. As part of a China trip as defence minister he will today visit the Chengdu Panda Breeding Centre and "hand-deliver the Wellington City Council proposal" to receive a pair of giant pandas.

John Key must be excited.

The PM has repeatedly said he's "excited" about the panda potential, and ready to chip in to help pay the bill, but he knew nothing of Brownlee's diplomatic bear hug.

Wellington City Council must be excited.

Maybe, except they're still putting together a business case for getting pandas.

What did Brownlee "hand-deliver" the Breeding Centre, then?

Can I stop you there? In the past you've tackled important issues such as refugees, privilege, and so on. Aren't pandas a bit frivolous?

Is "panda diplomacy" anything more than a highfalutin term for the transfer of cute animals?

It is. According to some reports, panda diplomacy history reaches back as far as the sixth or seventh century, when Chinese rulers gave giant pandas to the Japanese. In its modern form, this cuddly branch of diplomacy began under Mao Zedong. The Chairman donated the scarce and famous creatures as part of opening dialogues with other nations, most famously in the case of Nixon's America.

Similar. Ping-pong diplomacy pre-dates panda diplomacy. The travel of US and Chinese table tennis players between the two countries thawed relations and paved the way for President Nixon's famous 1972 visit, which in turn led to pandas.

How were Nixon's pandas greeted?

The announcement was front page news in the New York Times, and sparked a battle between the zoos as to which would house them. They ended up at the National Zoo in Washington DC. While some argued they should be called Ping Ping and Pong Pong (seriously), they retained their original names, Ling-Ling and Hsing-Hsing. In exchange, the US gave China some musk oxen.

Where else have Chinese pandas been dispatched?

Everywhere from North Korea to the UK, the Soviet Union, Mexico, Spain, Germany and even Belgium, where the decision to locate the bears in a wildlife park in the country's French-speaking region, not far from the prime minister's home, triggered a furious political controversy.

Why does China give them away?

It doesn't. These days the sought-after animals are available on long-term leases, for hefty fees, to contribute, says Beijing, to efforts to conserve the endangered species, of which there are only about 2,000 worldwide, including 50-odd in captivity. The new approach replaces short-term loans and, before 1982, straight gifting.

How does China choose recipients?

A 2013 paper by a group of researchers from Oxford University, called Diplomats and Refugees: Panda Diplomacy, Soft "Cuddly" Power, and the New Trajectory in Panda Conservation, concluded that the loans tended to be "associated with nations supplying China with valuable resources and technology and symbolise China's willingness to build guanxi - namely, deep trade relationships characterized by trust, reciprocity, loyalty, and longevity".

Soft power is a concept coined in 1990 by Joseph Nye to describe the use in international relations of non-military, non-coercive persuasion, using cultural, media, or other values-based tools. The pandas are a branch of soft power known as furrin' policy.

Glad you asked. "Thinking about pandas helps make sense of modern China's rise to global domination," writes Henry Nicholls in his 2010 book The Way of the Panda: The Curious History of China's Political Animal. "Like the panda coming from nowhere to become one of the most recognised animal species on the planet, so China has struggled free from Western colonialism."

How much will these pandas cost?

Notwithstanding some talk of swapping pandas for kiwis, it reportedly costs about $1.4 million a year for a pair of bears. You need to import bamboo, too. Heaps of it: they can munch up to 40kg daily. Adelaide Zoo, currently the only panda residence in the southern hemisphere, paid a reported $10 million for its panda enclosure, including, for the hot summer, an elaborate panda air conditioning system.

Will Wellington need one of those?

Certainly. Labour leader Andrew Little, for one, has questioned the spending priorities, labelling Brownlee a "panda pimp" and warning the bears could become "white elephants".

Plenty. Some doubt their suitability for Wellington Zoo. Others question the morality of zoos full-stop. And one bamboo-roots Wellington group has launched an online petition urging the council to consider a cheaper option - "Robot Pandas as an alternative to Rent-A-Pandas from China".

Robot pandas. OK. Is this the ursine equivalent of Red Peak?

The petition only has 12 signatures so far. But who knows what might happen.

Not for a while. The mayor says not before 2016 and after the snow leopards.

Give us this panda diplomacy in 25 words

Gerry, John and Celia's ship could soon sail from China with a cargo of panda bearsies, all laden with goodies for the zoo and diplomacy.