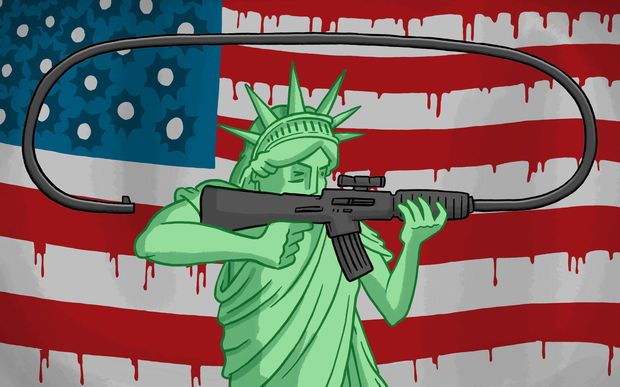 What is this trigger happy America of which you speak?

A shooting at a community college in Oregon last week, in which a 26-year-old murdered at least nine people and killed himself, has put America's relationship with guns in the spotlight.

Yes, again. By one calculation, there were 994 mass shootings, defined as four or more people shot in one incident, in the 1,004 days between Barack Obama's re-election to the White House in late 2012 and the Oregon incident.

What was Obama's response?

He delivered an impassioned speech urging Americans to crack down on access to firearms.

Yes, again. It was his 15th speech as president responding to a mass shooting. This time, however, he was angrier, blunter. The US was "the only advanced country on earth that sees these kinds of mass shootings every few months", he said, urging Americans to make gun control an election issue. "We collectively are answerable to those families who lose their loved ones because of our inaction."

They did. Dozens presented the information. In the decade to 2013, there were more than 1,000 gun deaths (including homicides, suicides and accidents) for every terrorism fatality.

It is still striking: 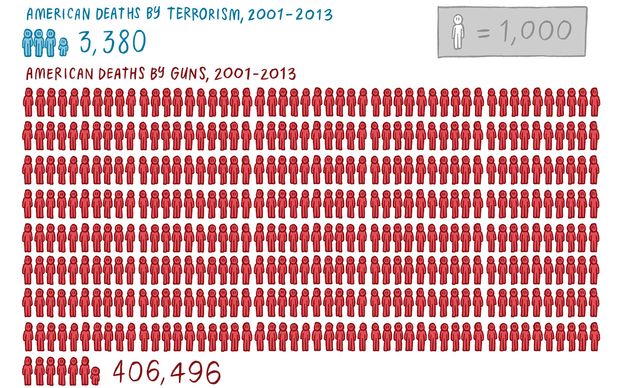 Is Obama right that the US is the only advanced country that sees regular mass shootings?

One study of developed nations ranked the US below Norway, Finland and Switzerland in mass shooting fatalities between 2000 and 2014, though those three countries all suffered one or two major attacks.

For sheer volume and frequency, the US leads the world. While home to less than 4.5 percent of the world's population, the US accounted for 31 percent of mass shootings between 1966 and 2012.

But in fact America's gun problem is not really about mass shootings at all.

Mass shootings are the tip of a gunpowder iceberg.

How widespread is ownership? 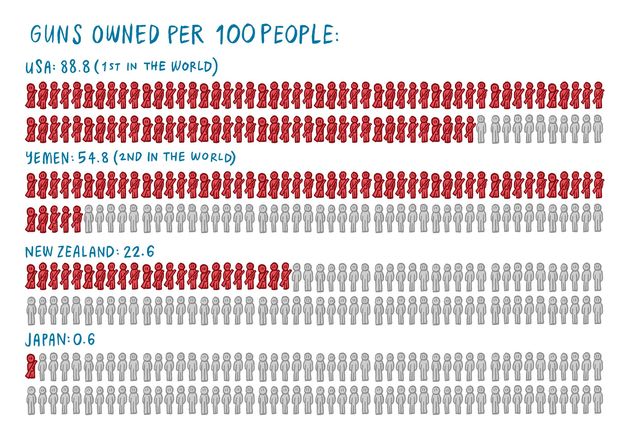 So pretty much everyone has a gun?

No. Roughly 40 percent of households are believed to own guns today, down from about 50 percent in the 60s. Fewer people own guns, but those that do tend to own more.

What stops a crackdown?

For starters, there's the Second Amendment to the Constitution.

How does that go?

"A well regulated Militia, being necessary to the security of a free State, the right of the people to keep and bear Arms, shall not be infringed."

In 2008 the Supreme Court issued ruled that the Second Amendment confers the right to possess a firearm for self-defence.

What about the NRA?

The NRA stands for the National Rifle Association.

Right. Aren't they a big part of this?

They've become an enormously powerful lobby group. Since the 1970s, prompted by concerns that the government was bent on banning arms, it has vehemently opposed every inch on gun control.

Are the public sympathetic to the NRA?

Yes and no. Polls show a majority support specific measures to curb gun availability, but opinion is divided on whether gun rights or limiting gun availability is more important. Specifically on the NRA, 40 percent say they have too much influence over laws, 17 percent say too little and 36 percent say about right.

How do they wield such influence?

They're effective lobbyists, especially but not exclusively on the right. Republican politicians go to great lengths to prove their firearm enthusiasm.

Earlier this year would-be Republican presidential nominee Senator Ted Cruz showed his enthusiasm for automatic weapons by demonstrating how you could cook bacon by wrapping it around the barrel of a machine gun and firing off several rounds.

How did Republican presidential hopefuls respond to Oregon?

"The gun laws have nothing to do with this. This is mental illness," said Donald Trump, echoing NRA lines. He also suggested it might have been less bloody had teachers been armed. Jeb Bush meanwhile said it was "very sad", but "stuff happens".

Many, the World Health Organisation among them, push not so much for ownership bans but a public health approach, similar to addressing smoking or road safety.

Among various measures advocated: gun buy-backs; bans on particular weapons types; ownership registers; greater coordination between police, probation officers and social workers, and between police and community groups. Some argue that digital technology could be made compulsory to ensure only owners could fire guns.

One simple win would be to extend background checks to private sales and gun fairs - currently in most states they apply only to gun shops, leaving a gaping loophole.

Maybe, but just this week there have been online threats of an Oregon-style copycat attack at Otago University.

OK, but we're much safer, given tough gun control.

Again, maybe, but the Police Association insists its members are increasingly confronting armed criminals, despite statistics suggesting gun-related offending remains very low (about 1.3 percent of recorded violent crime). The NZ Herald yesterday argued that a register of firearms should be introduced.

New Zealand is one of only a very few developed countries that doesn't have one in place, along with the United States.

How about this headline from the satirical US publication The Onion last year? "'No Way To Prevent This,' Says Only Nation Where This Regularly Happens."