Bloomfield reveals Auckland border not necessary under new system, Luxon calls police and iwi checkpoints a waste of resources and district health boards set up mini-MIQS ahead of Auckland's exodus. 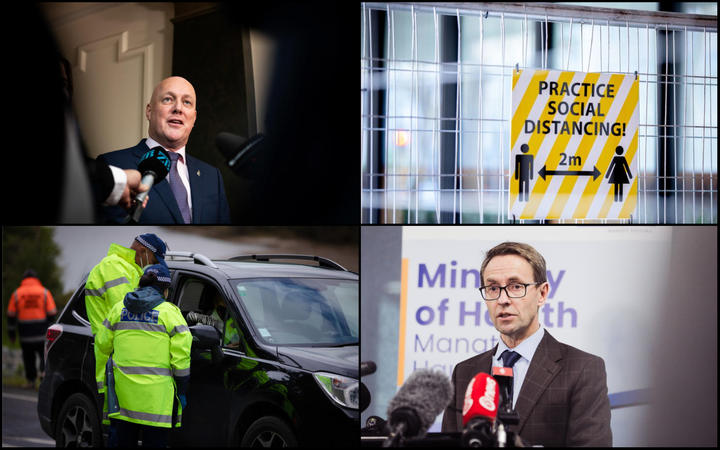 Director-General of Health Ashley Bloomfield has told a select committee that he advised Prime Minister Jacinda Ardern there was no need for an enforced border around Auckland under the traffic light system.

An affidavit presented by Dr Bloomfield to the Waitangi Tribunal, which is investigating the Covid-19 response, shows the Ministry of Health's advice was initially that Auckland's hard, managed boundary should come down at the same time as the traffic light system kicked in.

Cabinet instead decided to keep the border up for another 12 days, until 15 December.

Dr Bloomfield, speaking to the Health Select Committee, said it was believed the extended timeframe would not mean greatly increased risk.

"The advice from my team was that the difference of a week or two in terms of just pushing the vaccination rate up just one or two more percentage points was not, from a public health perspective ... was not material in terms of the risk," he said.

He said Cabinet had other advice it needed to consider in making its decision, however.

"Advice was also sought from other parts of government and then Cabinet rightly makes the decision about the appropriate dates."

Meanwhile, a large tract across the centre of the North Island which has been put into red, was also not part of the advice the ministry provided.

"Our final advice that did go up was very clear that we felt that all of the country aside from the Northern region should be in orange."

"Through the Waitangi Tribunal affidavits that Dr Bloomfield put forward, the first thing I'll say is that his advice to the Prime Minister was that in fact there is no need for a hard or enforced border around Auckland ... due to levels of high vaccination rates those borders don't need to be in place."

Luxon told Morning Report the published criteria as to why Auckland is in red was inconsistent with Jacinda Ardern's messaging.

Luxon said the relocation of 300 police officers to Northland from the South Island was a waste of resources when there is crime to fight over summer in the South.

The police union and one Northland mayor were disappointed at the plan for officers to be stationed on State Highway 1 near Uretiti and State Highway 12 near Maungaturoto, carrying out random checks.

Tai Tokerau Border Control had been asking for police checkpoints rather than spot checks of vaccine passes, to keep vulnerable Northland residents safe from Covid-19.

Police say 74 staff from across Northland and other districts will be used on a 24/7 roster to run the two operations from next Wednesday.

However, Police Association president Chris Cahill said the officers would be on seven-day rotations, so closer to 300 police officers around the country could have their work disrupted.

"This is a busy time for police as it is. They'd be better utilised in their own districts policing the higher demands we have at this time of year for things like family harm, mental health and of course other police activities we have around the country," he said.

"I don't believe these checkpoints will stop a significant number of unvaccinated persons," he said.

Officers would randomly stop vehicles and local border control will help them check for documentation - either a vaccine pass or proof of a negative Covid-19 test in the previous 72 hours.

Cahill didn't think the police have had much choice.

"Police have been forced to establish these checkpoints. They had little choice given iwi's wish for them - and that they were probably going to do them anyway. I just challenge iwi to prove the value of such checkpoints," he said.

Kaipara District mayor Jason Smith wanted random checks of drivers and was surprised at the location of the two checkpoints.

He said the one in Maungaturoto effectively severs his district in half, leaving communities like Kaiwaka in "no man's land" between the checkpoint and Auckland.

Mini-MIQs are being set up all over the country in places that do not already have them in case people cannot isolate where they live or are staying.

Just two motel units have been set aside in Queenstown for people who might need help to isolate with Covid despite tens of thousands of Aucklanders about to hit town, mayor Jim Boult said.

He is worried it will not be enough to make sure people can isolate safely while holidaying in town.

He had asked the Southern District Health Board to get a larger facility ready, especially because it was only about 10 days before Aucklanders would start arriving in numbers.

Most people with Covid-19 now isolate at home if they are well enough but that is not always possible if their house is too crowded or they are in their last couple of days at a campground, motel or Airbnb.

Southern DHB chief executive Chris Fleming told a board meeting on Tuesday in Queenstown was very limited and they had now realised they would need to add more.

In Northland, they have already been using a small number of theirs.

Northland DHB clinical leader for community isolation Sarah Clarke said they would eventually use a mixture of accommodation including motel units and old hospital housing.

Ideally anyone who caught Covid-19 or who was a close contact would head home to isolate but if that could not be done safely support would be available, she said.

The mayor of Gisborne has made an online appeal to anyone with Covid-19 symptoms to get tested after a third positive wastewater sample in the region.

Public health officials are not aware of any recovered cases in the Tairāwhiti-Gisborne region who may be shedding the virus.

The Ministry of Health says a third positive detection strongly indicates there is at least one undetected case in the community.

Gisborne mayor Rehette Stoltz said someone in the community may have Covid-19 but not know it.

Stoltz said the drive-through testing station was open and urged anyone with cold and flu or gastric symptoms or a loss of taste to get a Covid test.

She said the positive result should be a wake up call for anyone who still needs to be vaccinated.

New Zealand's major shearing event has been cut for the second year in a row - with organisers blaming Covid uncertainty.

The Golden Shears has been held annually for 60 years at Masterton's War Memorial Stadium in March, usually drawing about 400 competitors and a thousand spectators.

Society president Sam Saunders said it was an extremely tough call, as the event is important to the farming community and Masterton.

Saunders said the increased responsibilities for control of competitors and spectators under the new Covid rules also brought new problems.