The New Plymouth Positive Ageing Trust says allowing people open access to many council facilities in the city without the use of a vaccine pass is putting lives at risk. 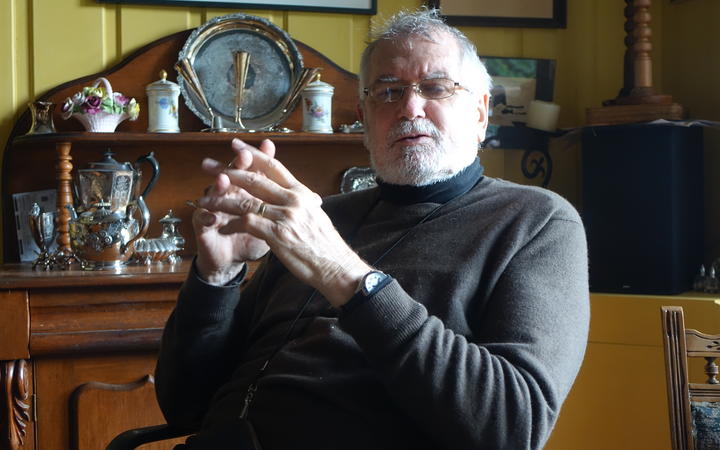 Lance Girling-Butcher says older people might be discouraged from going to some of their favourite places if there were no Covid-19 vaccine pass requirements in place. Photo: RNZ / Robin Martin

The council is not requiring a vaccine pass be show to gain access to all its libraries and event venues, its museum, gallery, zoo and pool complex.

It will only be required to be used when entering the Puke Ariki cafe, the Todd Aquatic Centre's cafe, gym and sauna, the Govett Brewster Art Gallery/Len Lye Centre's cinema and for standalone shows and events at council venues.

Trust chair Lance Girling-Butcher said that was not acceptable.

"I mean we're talking about life and death here. It's not just a matter of getting sick. It's a fatal disease for some people particularly older ones."

Girling-Butcher said older people were effectively being excluded from some of their favourite haunts, such as libraries.

"I think it will discourage them because they fear catching a disease and putting their lives at risk.

"They feel uncertain anyway and with the borders coming down and a lot of people from Auckland coming our way, I'm sure there are a lot of people who are too scared to go out and they are just looking for more reassurance."

He said he expected better from the council.

"I think it is a matter of making people as safe as they can be and so that includes only admitting vaccinated people into places where the risk is increased because they are mixing with other people."

He said the move was particularly galling in a week when Covid-19 had been discovered in New Plymouth.

"We are aware the risk in New Plymouth has increased because we apparently have five infected people and obviously that's spreading."

Yesterday, the Ministry of Health reported there were two new cases of Covid-19 to report in Taranaki, taking the total number of cases reported in the region to five.

However, it some of these cases have since moved to their respective district health board areas where they normally reside.

In a statement, New Plymouth District Council said it had received a handful of complaints about vaccination pass policy but was sticking to its plans.

The council said it was following government regulations with the aim of keeping everyone safe - including staff - and had done a risk assessment of its facilities before making its decsion on whether or not to use the vaccination pass.

"There'll be a period of adjustment as we ease into the new rules, so thanks for being patient and respecting our fabulous staff who are doing their best to keep us all safe," it said.

The council said it was in discussion with a small number of staff members about the vaccine pass, but none had left their job over the situation.

It reminded people that they would still need to continue to scan in, wear a mask and socially distance indoors at council facilities.

The Taranaki District Health Board has reached 91 percent of the eligible population for their first dose of the Covid-19 vaccine, and 83 percent for the second dose.