The Covid-19 Pfizer vaccine could be available for children from the end of January, while the Omicron variant reaching MIQ is 'inevitable' the Covid-19 Response Minister says. 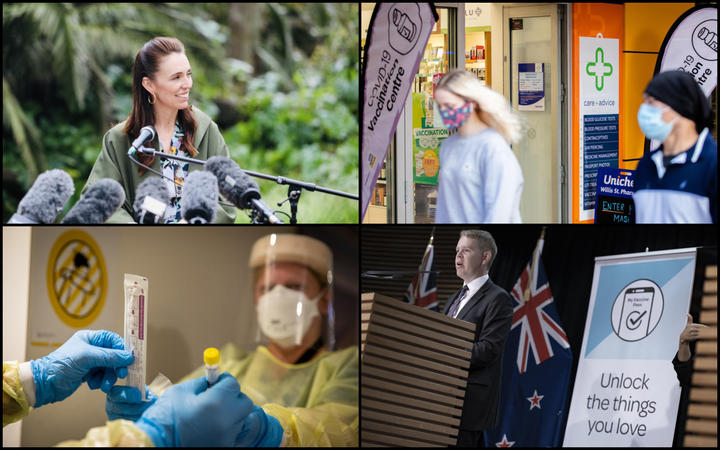 There were 146 new community cases of Covid-19 in New Zealand today.

Today's cases included 124 in Auckland, 14 in Waikato, four in Bay of Plenty and one in the Nelson/Tasman region who was reported yesterday but officially added to the tally today.

The new case in Nelson is not linked to existing cases in the area and the public health unit is investigating a possible source of infection.

There are now four active cases in Nelson and anyone with symptoms is being urged to get tested.

There are 83 cases in hospital, including nine in intensive care. Two are in Waikato and the rest in Tamaki Makaurau. Five of the Auckland cases are in ED or assessment units.

The Ministry of Health said 70 percent of people in hospital are unvaccinated or not eligible and the average age is 46.

Children aged 5-11 may be able to receive a vaccine dose from the end of January, pending official approval.

He said planning for the rollout of vaccines for children was "well advanced", though there was still some detail to work through.

The paediatric version is an adapted version and is about a third of the adult dose. He said Medsafe's advisory committee will be receiving advice by mid-December, and the government expects to start rolling it out before the end of January.

He said we were seeing more cases in children, partly because children cannot be vaccinated.

There was the potential for vaccinating children in school settings, Hipkins said.

Dr Bloomfield said about 20 percent of cases in the current outbreak have been under 12 years, but the "vast majority" of those cases has been from household transmission.

"Every week we wait translates to hundreds more children infected with Covid-19 and being put into isolation because children are the last remaining unvaccinated group in the population," Dr Russell said.

New modelling shows hospitalisation and ICU bed usage has levelled off in Auckland.

Director-General of Health Dr Ashley Bloomfield said this is both because of increased vaccine rates as well as the efforts of healthcare workers in providing care.

"Whilst our hospitalisation rate throughout the full outbreak has remained between 11 and 12 percent and it has been for the last four weeks ... our proportion of people requiring ICU care has dropped from 5.7 percent across the full period of the outbreak just down to 3 percent in the last month or so."

He said anyone with symptoms of Covid-19 should still get tested straightaway and remain isolated until they get the result back.

Hipkins: 'Inevitable' Omicron variant will show up in MIQ

Chris Hipkins told Morning Report the Omicron variant will inevitably turn up in MIQ but it is too soon to predict whether the country will revisit the plan to lift border restrictions from January, .

He said New Zealand's MIQ arrangements were some of the tightest in the world but there was no way to be 100 percent protected.

He later said at the Covid-19 briefing that Omicron was a cause for concern, but it was not a cause for panic.

"Our readiness and response planning in the event of a new variant of Covid-19 entering in New Zealand remains the same as it has been for previous variants in that we are ready and we have plans in place."

He said this afternoon that the variant is still in its infancy and the evidence on it is being monitored closely.

The government has announced a $37.5 million stimulus package to promote travel around Auckland for Aucklanders this Summer in a bid to bring back the buzz the city has sorely missed during months-long Covid-19 restrictions.

Any individual or family with an Auckland postcode will be eligible and Auckland residents can register interest for a voucher from 15 December.

Nash said the $37.5 million package had been put together jointly with Auckland Council and Auckland Unlimited.

"The first initiative is the Explore Tāmaki Makaurau this Summer voucher and discount scheme. It will take a few weeks to implement but will be well worth it when it goes live.

Explore Tāmaki Makaurau is a $12m voucher and discount programme meant to encourage families and individuals to visit commercial attractions and council-owned facilities over summer.

"There will be 100,000 vouchers available for families and individuals as well as discounts or free access to Auckland Council facilities to help get Aucklanders out and experience the city while providing much-needed foot traffic in the CBD."

Another $12m will go towards foodbanks.

"The second initiative is the Local Activation Programme, a contestable fund for businesses or community organisations to organise events that are free for the public. It will help bring neighbourhoods and town centres back to life."

He said $10m had been allocated for the Local Activation Programme and organisers must require vaccination certificates and follow public health restrictions.

"This support will reach a wide range of communities and neighbourhoods, through activities like Christmas markets, New Year cultural performances, and council-run sports and leisure facilities."

Funding will apply to events and activities between 15 December and 3 April.

In the Auckland District Health Board area, 96.2 percent of eligible people have had at least one dose of the Covid-19 vaccine.

It is the highest rate in the country and smashing vaccination expectations.

University of Auckland epidemiologist Rod Jackson said the rate should be the new national benchmark - and matched by second doses as soon as possible.

He said everyone who doesn't like Aucklanders "should see if they can do better than Auckland".

Auckland DHB was also on track to be the first in the country where 90 percent of Māori have had at least one dose.

It was just 292 people short of that goal yesterday.