There were a record number of community Covid-19 cases today and another person has died, anti-vaccination feeling leads to fears over MPs' security and the traffic light system may be all-go around the country earlier than planned. 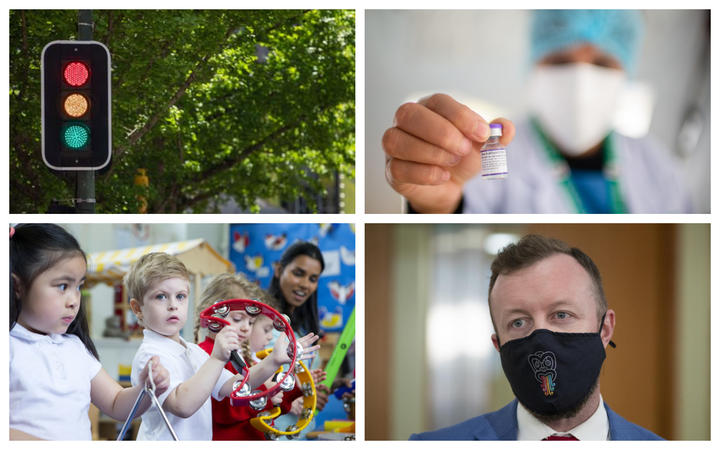 From top left: the traffic light system may be adopted early, the vaccine's efficacy is being hailed; MP Kieran McNulty has been threatened; and many early childhood centres expect to lose teachers. Photo: RNZ / AFP / RNZ / 123RF

The Ministry of Health announced that there were 222 new community cases today - a record for the Delta outbreak.

Of the cases, 197 cases are in Auckland, two are in Taupō, two are in Wairarapa, one is in Northland and 20 are in Waikato, which moves to alert level 2 at 11.59pm today.

Public health officials said they were investigating a common link between cases reported in Taupō, Tararua and Masterton.

A patient in her late 70s died at Auckland City Hospital yesterday after she was admitted on 11 November and had subsequently tested positive for the virus, the ministry said.

MPs have been offered improved home security after escalating threats from those protesting at the Covid-19 vaccination.

Labour's chief whip Kieran McAnulty has received multiple death threats after being filmed and abused by a protester over the weekend.

After being confronted, Mr McAnulty approached Parliamentary security on behalf of all MPs.

The security team has agreed to put forward a proposal on further protections.

As a start, all MPs can request a security upgrade of their Wellington residences - including a potential lock-change or camera installation.

"I've never received death threats before so it is pretty confronting, but I'd like some further advice as to how serious that is or if it's a keyboard warrior just getting wound up," McAnulty said.

It is looking increasingly likely the whole country will move to the Covid-19 traffic light system before every district health board (DHB) has hit 90 percent fully vaccinated.

The Ministry of Health has advised Cabinet to consider the shift because it will give greater protection than the alert level system.

Ministers will make the call on 29 November.

Director-General of Health Ashley Bloomfield pointed to Covid-19 cases in multiple regions and said unlike the traffic light system, there was a lot of interaction between vaccinated and unvaccinated people at alert level 2.

But Hāpai Te Hauora chief executive Selah Hart feared what an early move to the traffic light framework could mean for communities with low vaccination rates, saying he had grave concerns for Māori.

He led a health briefing this morning about the impact of vaccination on case numbers and hospitalisation rates.

He was joined by Immunisation Advisory Centre director Professor Nikki Turner and Tamati Shepherd-Wipiiti, who is the general manager equity for the Covid-19 Vaccine Immunisation Programme,

Dr Bloomfield said statistics just out of the United Kingdom showed the age-adjusted risk of death was 32 times higher if people were not vaccinated.

He said they would be watching the vaccination programme for five to 11-year-olds in the United States, and the data it created.

Once the necessary approvals were through, he said that could be rolled out in New Zealand early next year. 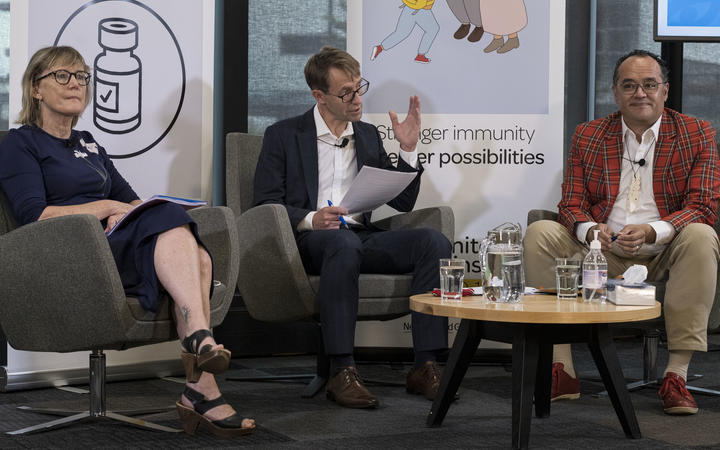 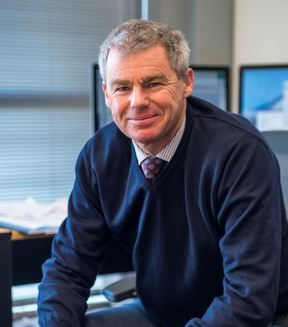 An immunologist said those who qualify should get a Covid-19 booster shot because it seems that the third dose of Pfizer really lifts people's level of immunity.

The government yesterday announced that booster shots of the Pfizer vaccine would be available in a fortnight from 29 November for people who got their second dose more than six months ago.

Immunologist Graham Le Gros, who is director at the Malaghan Institute of Medical Research, said booster shots had great potential to change the game for the better.

Le Gros said there was some speculation about how long the booster shot would last, but he was hopeful that it would give a couple of years of "durable immunity" because of the way that the immune system works.

The government's vaccine mandate means staff without a Covid-19 vaccination are not allowed at work.

The council said 370 of its members responded to a survey.

The council said centres will have to send children home if they do not have enough staff to maintain minimum staff child ratios.

Principals say it is unclear how many people refused to comply with the vaccine mandate.

They estimate only 700 school teachers did not meet the deadline to get their first vaccination.