Director-General of Health Ashley Bloomfield and officials held a briefing this morning about how high vaccination rates affect the response to Covid-19, including hospitalisation rates.

Dr Bloomfield says this time last year, people were desperate to put a figure around what vaccination coverage could be achieved, and the figure being bandied about then was about 70 percent.

"We know because of Delta that we need to get higher coverage than that."

The 90 percent vaccination milestone is higher than what we would have initially imagined but we need to keep going, he says, it is not a target - it is a milestone.

As we get higher vaccination coverage, a larger proportion of people going into hospital will have been vaccinated, but there is an explanation for that, Bloomfield says.

"We're often asked, why 90 percent." Bloomfield says modelling shows 90 percent coverage gives a very high level of protection to the population and it is imperative to be able to manage the response to the ongoing Delta outbreak.

She says it is really important to have high coverage throughout all the communities.

"As Ashley has mentioned, 90 percent is not a magic bullet, we're not going to get rid of Covid with 90 percent coverage, so what we're looking at going forward is obtaining as high coverage as possible. The higher we get, the less hospitalisation we'll see, the less death we'll see.

"We could get really high coverage over there, but If we've left this community behind, when Covid arrives it will find that community.

"There is no point having a highly vaccinated central Wellington when small rural towns are missing out. Covid will find them."

Bloomfield says there is really good data from the Auckland outbreak that shows the virus has not been spreading in settings like supermarkets, and the traffic light system will reduce unvaccinated people mixing with vaccinated people in the settings where it does spread.

A recent Swedish study of more than 800,000 families shows if one member of the household was immune - already vaccinated or recovered from the virus - that reduced the spread to the household by about 45 to 61 percent. With two people immune, it increased to about 75-86, with three immune it rose to over 90 percent, and with four people, the spread reduced by over 97 percent.

That was not a study with Delta, but a recent Dutch study that does include Delta shows a vaccinated person who catches Covid-19 has a roughly 63 percent lower likelihood of transmitting the disease to the household.

Prof Turner says GPs can instantly see who has and has not been vaccinated, and will either phone them to encourage them to get vaccinated or refer them to others if the person cannot be found.

She says the ministry has reached out to GPs to offer extra support with this too. 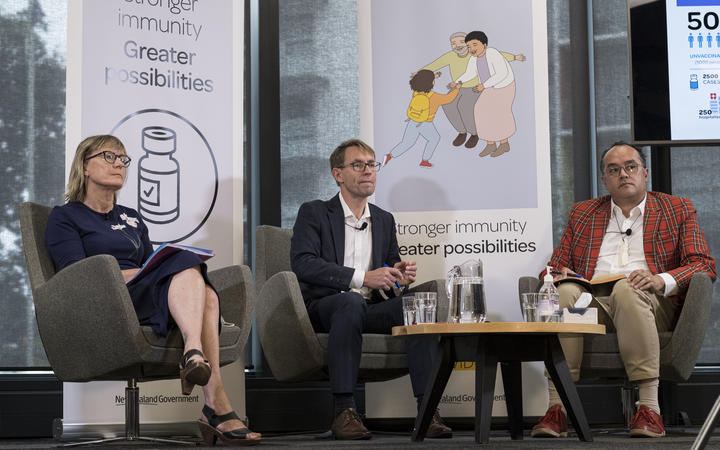 He says there is randomised, controlled trial evidence now - "relatively small study, 2000 to 3000 kids" - but New Zealand will be able to look at safety profile as the vaccine gets used for younger age groups in the US.

Shepherd-Wipiiti says some Māori and Pacific communities feel guilty, which is one of the things that might be causing them to be hesitant (i.e. 'I don't want to come in if I can't vaccinate my kids').

"This rips the heart out of our communities, [that] our kids are getting Covid."

"That is profound difference. There are very few things I can think of in my public health and medical career that have been so protective and reduced the risk of death so much with such a simple and cheap intervention." 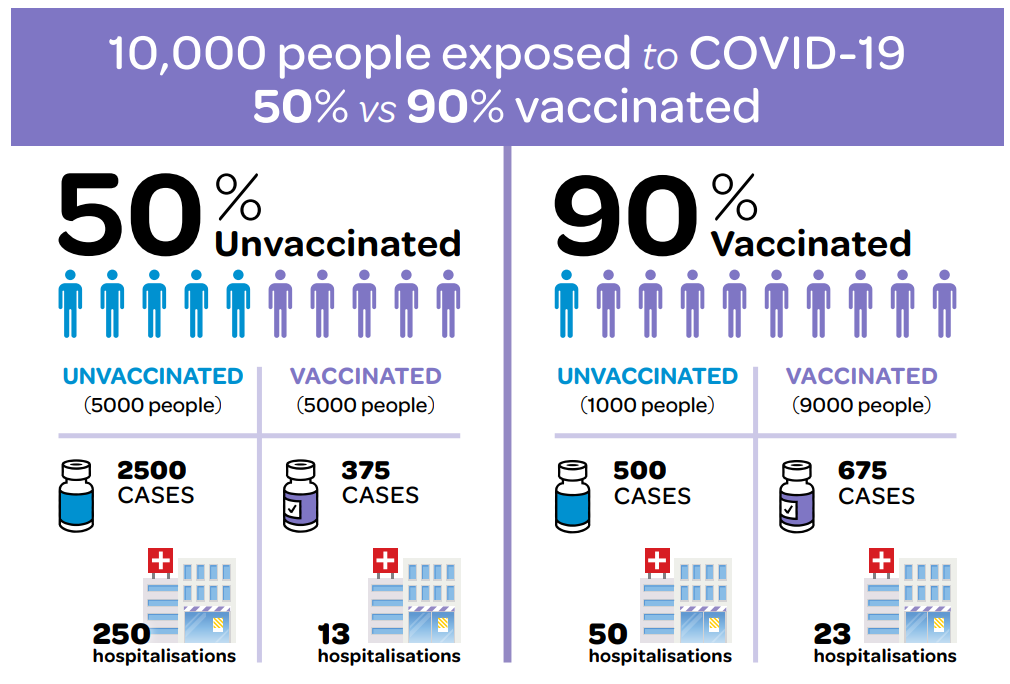 Comparison of case numbers and hospitalisations at different levels of vaccination. Photo: Supplied / Ministry of Health

All those who have come out and been vaccinated are doing themselves a huge favour, he says.

Bloomfield says it was not long ago there was a roughly equal split between vaccinated and unvaccinated.

"Even if ... the virus does come in contact with them, their body is able to get rid of it before they become infected or infectious to others."

Prof Nikki Turner says the Pfizer vaccine is one of the best in the world - if not the best - performing, and we now have extensive data from around the world. The side effect profile has been clearly delineated.

She says with concerns about myocarditis - which can be a side-effect of the vaccine - the risk of getting that from the disease is about four times higher than the (very low) risk of getting it from a vaccine.

Tamati Shepherd-Wipiiti says he wants to celebrate some of the firsts for vulnerable communities including overseas in America and Canada. 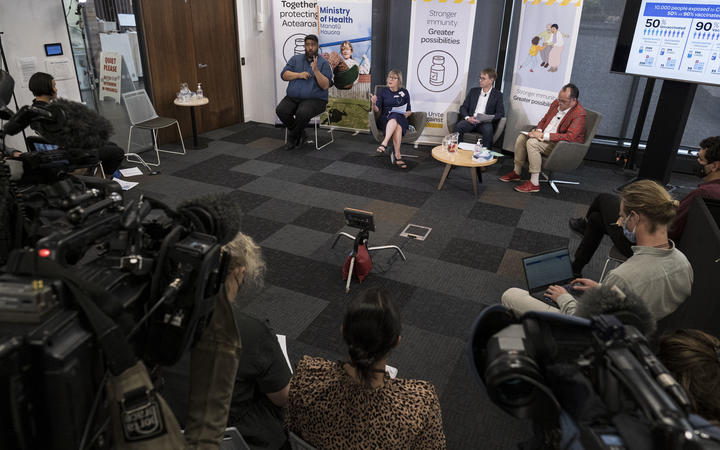 He says disability communities are doing really well, and there was a 3 percent to 4 percent uplift in vaccination rates on Super Saturday.

Pacific organisations are smashing their targets, supported by churches and DHBs.

In Northland, DHB clinics are getting in about 48 percent of the population, hauora are covering 25-28 percent, and GPs and pharmacies about 22 percent, he says.

What that means for Māori is 77 percent first dose and 61 percent second dose, he says.

Before Super Saturday, Māori vaccinations averaged about 2000 to 3000, and that has since increased to about 5000 a day.

He says the key question is whether there will be another vaxathon, but "the second movie's never as good as the first", so it seems unlikely.

Shepherd-Wipiiti will be hosting a "fried bread friday" in Kaiti, in Gisborne so people can get vaccinated and get a fried bread.

Māori and Pacific providers like Te Puea Winiata and Silau at South Seas are working closely together to address the vaccine challenge and prioritising things like manaakitanga, he says.

A number of Pākehā are also preferring the Māori health providers, he says.

"We can see a lot of Pacific and I think Māori health providers really coming to the fore, to the front of healthcare service delivery. It's a really beautiful thing to see."

He says iwi have been doing detailed planning about vaccination, testing and how to respond if the virus spreads into their communities.

Bloomfield says there have been really high testing rates amongst Māori, the highest rates of anyone recently, partly because that is where the majority of the latest cases have been.

Shepherd-Wipiiti says the other flip being seen is a lot more door-to-door initiatives, and the first question was 'how are you whānau'.

"Really important that they were using data that could show them down to which streets.

"We've worked in partnership with iwi, in particular through our data sovereignty group ... to help our iwi access their own data. They've got the toolset ready, if the iwi need a user ID they're ready to go.

"In the Māori world that's not just data, that's our whānau."

Bloomfield says the data will be shared with the Whānau Ora Commissioning Agency. He has signed off the sharing of data for rohe including Tāmaki Makaurau and Kirikiriroa, as well as sharing it with the agency's providers on the ground and with iwi in Waikato.

"It will be shared where those appropriate conversations have happened."

* Prof Turner incorrectly stated on the live broadcast that one in five people who caught Covid-19 would need to go to hospital and need support to breathe. This incorrect figure was based on a misquoted statistic and Prof Turner has retracted the statement.