The government has hinted at reopening primary schools from mid-November, businesses fear the economy will worsen, home isolation is well underway in Auckland now and MIQ changes are due to be revealed tomorrow. 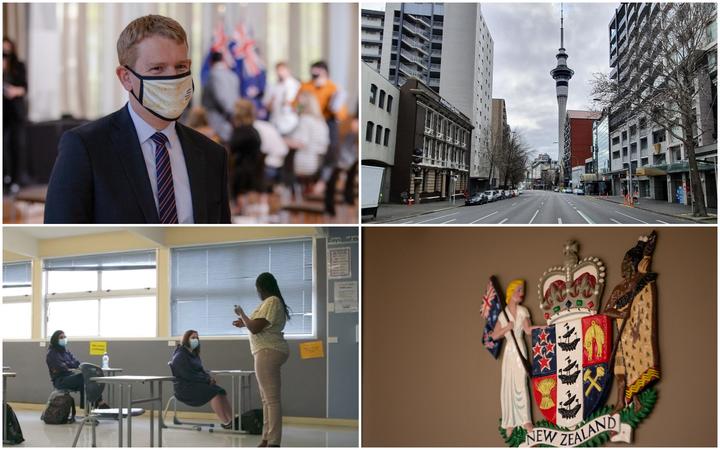 There were 74 new community cases of Covid-19 reported today: 68 in Auckland and six in Waikato.

Of the new cases, 31 remain unlinked.

There have now been 2832 cases in the current outbreak.

There are 41 people in hospital, with five in intensive care.

From tonight, alert level 3 restrictions are set to ease slightly in Waikato, where there are 97 community cases.

The number of New Zealanders now fully vaccinated has reached just over 3 million, or 72 percent of the eligible population.

There are more than 572 positive cases and close contacts who are isolating at home.

Director-General of Health Dr Ashley Bloomfield says home isolation is now being used in Auckland and the pandemic response is adapting.

Bloomfield says people are interested in being able to stay at home and it will become the norm to do so.

But Hipkins could not guarantee any changes to MIQ before Christmas.

As Education Minister, Chris Hipkins has asked the Ministry of Education to work with primary schools and kura on advice for a staggered return to learning.

Hipkins has requested they work on the basis of an indicative start date of 15 November.

He has told Checkpoint an announcement will be made "as soon as we can" for primary school students returning to school part-time, but would not say if a decision will come in the next week.

"If we see case numbers stable, and if we see that we're managing case numbers in a way that gives us confidence that we can get kids back at school with the risk being relatively low, with those extra protective measures in place, then I think the 15th [of November] is absolutely a deliverable timeframe."

But students in Year 9 and 10 have not been given any indication whether they will have a chance to return to classrooms.

A 21-year-old woman has been charged by police in relation to an alleged Auckland border breach by a Navy sailor last month.

The sailor reportedly crossed the boundary to attend a close family member's funeral without a travel exemption.

In a separate incident, a police inspector is being investigated for allegedly breaching the Auckland border.

And three women accused of flouting Covid-19 restrictions by travelling to Auckland for a mass gathering have appeared in court.

The trio made brief appearances in the Taihape District Court where their names were temporarily suppressed.

The women, aged between 50 and 53, entered no pleas to one charge each of breaching a Covid-19 order.

Businesses expect economy to get worse

ANZ Bank's monthly survey of sentiment shows companies are more confident about their own outlook but more pessimistic about the broader economy.

The measure of business confidence about their own outlook increased to a net 22 percent from 18 percent in September, while headline sentiment grew more pessimistic to a net 13.4 percent expecting the broader economy to get worse from 7.2 percent pessimism last month.

ANZ chief economist Sharon Zollner said given the uncertainty caused by the Covid-19 outbreak the medium-term indicators were robust, but rising costs were being felt.

Hipkins says regulators are poised for final approval to rollout a Covid-19 vaccine for children.

An expert panel has recommended the US Food and Drug Administration approve a Pfizer vaccine for ages 5 to 11.

If the FDA authorises a paediatric vaccine then the final say-so for its usage falls to the Centres of Disease Control next month.

More information from Pfizer is expected to be provided to Medsafe early next month.