Occupants of a car and a bus deliberately parked to obstruct traffic on SH1 only moved out of the way this afternoon after "lengthy engagement with police".

Police are continuing to monitor protesters remaining at the Southern boundary checkpoint in Auckland after a day of disruptions. 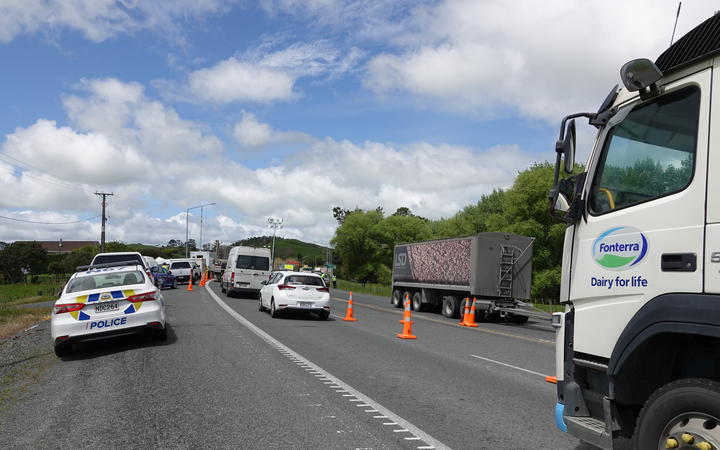 Police at the Southern checkpoint at Mercer had been dealing with a group of protesters, including the occupants of a car and a bus deliberately parked to obstruct traffic on SH1.

The occupants had refused requests to move the vehicles throughout the day, claiming to have an exemption to travel through the checkpoint.

Police eventually discovered that two occupants in one vehicle had been granted an exemption for permitted travel across the boundary.

"Occupants of the bus did not have evidence of permitted travel and after lengthy engagement with police, the protesters agreed to move the bus off the highway late this afternoon," police said in a statement this evening.

Protesters remained off to the side of the road this evening, with traffic able to move safely through the checkpoints.

No protesters were at the Northern checkpoint this evening.

Shortly after midday, a vehicle at the Northern checkpoint at Te Hana had blocked SH1 northbound. A woman was arrested and warned for obstruction and the vehicle was removed from the road.

"The protesters' actions today have caused disruption and delays for those travelling through the checkpoint for legitimate reasons," police said.

"We are frustrated that significant time and resources are being committed to resolve this situation and we are very disappointed by the actions of this group of protesters who continue to put the wider community and our staff at risk."

Meanwhile, Ngāti Whātua kaitiaki remain in bolstered numbers at the border between Tāmaki Makaurau and Te Tai Tokerau to stop any protesters getting through.

Together with Navy and police staff at Te Hana, Te Rūnanga o Ngāti Whātua had turned around about 50 people from anti-vax and anti-lockdown groups throughout this morning.

Chief operating officer Antony Thompson (Ngāti Whātua) told RNZ protesters had come from both sides of the border to meet up, but none got through.

"About 20 to 25 got out and started protesting ... after probably about 10 minutes they were moved on."

His team respected the right to protest but it was the wrong place and wrong time, with a growing Covid-19 cluster in the Far North, he said.

"The majority of them [protesters] have dispersed, or gone home. And there's maybe a handful of, I guess 'hold outs', that are hoping that more cars turn up and they can go through together."

The rūnanga would much rather be vaccinating whānau than having to protect them from rule-breakers, Thompson said.

"Recently our whaea Dame Naida Glavish quoted 'this hoo-ha, this hōhā' and it really is."

Police said they were "incredibly disappointed" by those rallying.

In a statement this afternoon, police had said more officers had been deployed to monitor hīkoi activity.

"Our focus is to ensure the current restrictions set out in the Health Order are adhered to by those involved as well as working to support our Iwi partners in Northland.

"We are working closely with our partners, including leadership of Te Tii Marae, who have indicated that the protesters are not welcome this year due to the risk posed by the Delta strain of Covid-19."

The other group of protesters [https://www.rnz.co.nz/news/national/454337/anti-vax-protest-convoy-stopped-at-auckland-border-blocking-sh1 originally attempted to make it through Auckland's southern border late on Tuesday evening.

The protesters were "particularly dangerous" attempting to get to Waitangi, he said.

"It is disappointing that organisers are using He Whakaputanga, or the Declaration of Independence, as a means to bring attention to their cause.

"Almost every Ngāpuhi urupā has evidence of the thousands of whānau, some in unmarked graves," he said, referring to those who died in the 1918 flu pandemic.

"Now, little more than 100 years after that pandemic, Te Tai Tokerau is at the point of a similar threat, but this time we have a vaccine at our disposal.

"We have not fought this virus for 20 months and tolerated the harsh restrictions around tangihanga, gathering at marae and visiting whānau, to abandon this plan now."

Meanwhile, a kaiāwhina for Te Tii marae in Waitangi, Waireti Paora said anti-vax protesters had not taken the focus away from commemorations there today.

The anniversary of the He Whakaputanga Declaration of Independence was being marked at the marae today.

She said anyone who wanted to acknowledge He Whakaputanga could come, but Covid-19 protests won't be tolerated.