Covid-19 cases hit three digits for the first time with 102 today, but that might go up to 180 a day in the next few weeks as emergency nurses foresee a 'tsunami' of patients with the virus. 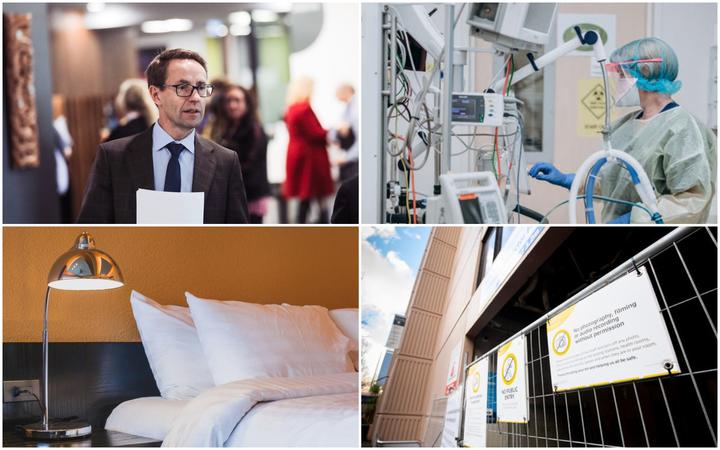 Daily Covid-19 cases have hit three digits for the first time, with 102 community cases today: 94 are in Auckland and eight in Waikato.

And one of the Waikato cases travelled to Hawke's Bay last week, and they were infectious while there.

Of today's new community cases, 40 are unlinked. There is now a total of 199 unlinked cases in the past 14 days.

Director-General of Health Dr Ashley Bloomfield said in Auckland, the focus was no longer on linking cases but more on finding contacts of known cases.

On the current trajectory, the country could expect up to 180 cases a day within two to three weeks, he said.

Covid-19 Response Minister Chris Hipkins confirmed this evening that alert level three restrictions in parts of Waikato will remain in place for at least another six days.

He said maintaining restrictions continues to be the most prudent course of action. He said the decision will be frustrating for residents, but today's cases show how stubborn the delta variant can be.

He said while most of the recent Waikato cases are household contacts or people linked to known cases, there is a risk the virus will spread further.

Ministers will review the alert level settings next Wednesday

There are currently 46 people in hospital with the virus, including seven in intensive care.

An Auckland emergency nurse said it was frustrating DHBs were not equipped well in advance.

She worried about where they would put Covid-19 patients if the ED became too full as they could not go in the corridors like other patients sometimes had to.

"More nurses, more negative pressure rooms, more ICU beds ... but that is all going to take time because we haven't been prepared for this. We haven't had the forethought for the future," she said.

But Australasian College for Emergency Medicine president Dr John Bonning said while the sector would not implode, a surge of cases would put a lot of pressure on hospitals and healthcare workers.

The government announced it would guarantee 300 spots a month in MIQ for health workers to enter the country, whether it be returning New Zealanders or doctors and nurses from other countries.

Suspected anti-vaxxers have been making bogus vaccination bookings in one of the least protected areas of the country.

Royal New Zealand College of General Practitioners president Sam Murton said there had been a spate of fake bookings in Tairāwhiti over the past few days, including in the lead up to Super Saturday.

She said one East Coast vaccination centre had 90 bookings in just a couple of days.

Only about 74 percent of people in Tairāwhiti have had at least one dose of the vaccine, well below the national average. The rates were 63 percent for Māori.

An Auckland inner-city hotel and restaurant operator has decided it will take only guests who are fully vaccinated from November.

The Hotel Britomart, including its restaurant Kingi, is introducing a vaccine mandate ahead of any government licence to do so.

The hotel's owner also operates The Landing, a luxury holiday accommodation in the Bay of Islands, which is also part of the vaccine mandate.

The Hotel Council Aotearoa has formally asked the ministers of tourism and finance to pass legislation to make vaccine mandates legal in the hotel and hospitality sectors.

Tomorrow, the government will announce a new system for future management of Covid-19, which will include specific vaccine coverage goals.

The failure of security monitoring was behind the escape of a man from an Auckland managed isolation facility in early September.

The man was able to leave the Novotel Ibis Ellerslie via a fire escape, partly because the CCTV wasn't working properly.

An investigation has also found a cable was plugged into the wrong port, and an operator was not logged in - meaning the man was able to slip into the stairwell undetected.

The report has made a number of recommendations around improving site security, while also developing a risk profile assessment for community cases.