Parents, children and teachers are bracing themselves for more lockdown learning this week. 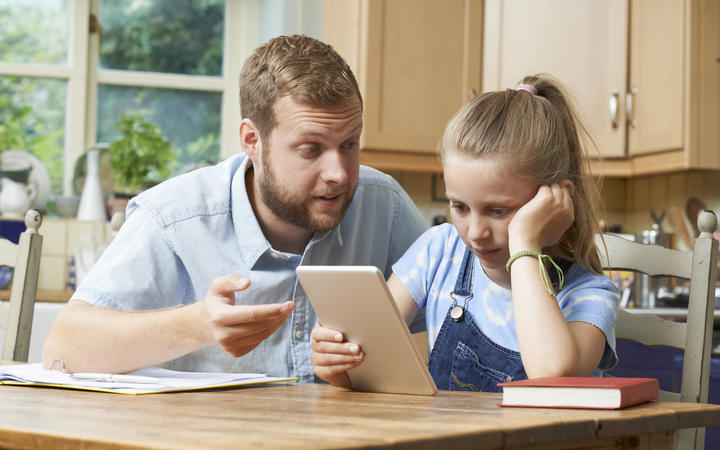 The government has confirmed the level 4 restrictions will run until at least Tuesday night, closing classrooms and early learning services for nearly 1 million children. It will announce this afternoon whether the lockdown will be extended.

She said she did not believe the lockdown would end on Tuesday night and she was not looking forward to an extended period of home-schooling.

"I am bracing myself. Not so much for the big kids, but definitely for the little one, he's 7. It is one of those things where you've got to sit right next to them and you've got to be involved and the concentration span isn't great, and then, you know, the fights ensue," she said.

Dyer said in a relatively small house, the children would not be expected to keep up remote learning all day.

"Oh gosh, only a few hours. There's no way that we could do a whole day. People would start going crazy. We do as much as we can and I think that's good enough, it's got to be good enough."

"I don't mind too much but it's obviously annoying because you can't see your friends and stuff. I quite enjoy working from home so you can have control over your work schedule, I quite enjoy that," he said.

His sister Jean is at secondary school and said the main problem with remote learning was the lack of social contact.

"Mainly just the drag of not being able to see my friends, but the actual schoolwork side I'm not too worried about, I think I'm going to be able to keep getting everything done," she said.

She was expecting the Qualifications Authority would let students earn extra credits like it did last year if the lockdown was extended and interfered with preparation for NCEA exams.

School principal Vaughan Couillault went into his school, Papatoetoe High, on the weekend to package computers to give to students who did not have one at home.

He said it was important they could.

"It's the difference between engagement and not being able to engage, so it makes a huge difference," he said.

Couillault said more students had devices at home than during last year's lockdowns, but there were still gaps.

Schools and early childhood centres are shut for all students, but the government announced that it had contracted licensed home-based education services to look after the children of essential workers who cannot make other arrangements.